Russians must go on a diet 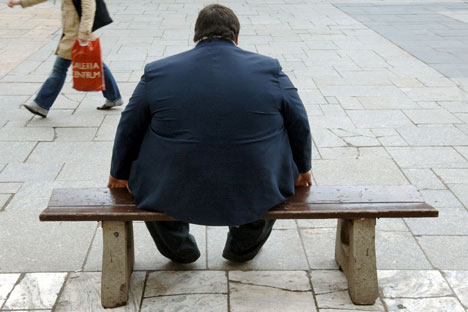 The number of overweight people in Russia is growing by leaps and bounds. A decade ago, estimates showed that about 19 percent of the population suffered from obesity; today that number has swelled to 23 percent, according to the Scientific Research Institute of the Russian Academy of Medical Sciences. Additionally, every other person over the age of 30 is overweight.

This problem is typical of many countries. In the United States, for example, 70 percent of the population is overweight and 30 percent is obese. According to the Organization for Economic Cooperation and Development, two-thirds of the population in Luxembourg, Canada and the UK is extremely heavy. So Russia is just following a worldwide trend, although this is nothing to be proud of. As a rule, excess weight is accompanied by all kinds of other health problems, including cardiovascular disease—the number one cause of death in the world. Between 2000-2008, the number of people with this diagnosis in Russia rose to 27 percent.

Viktor Tutelian, director of nutrition at the institute of the Russian Academy of Medical Sciences, believes that one of principal causes of obesity is total ignorance about diet. In an effort to combat this ignorance, the Russian Ministry of Health has prepared a list of dietary recommendations for Russians. The primary idea in these recommendations is that in order to maintain a stable weight, people should eat five times a day, rather than three, and their meals should contain more fruits and vegetables, fewer sugary and fatty foods and at least one day a week, people should eat fish. Certainly these are all good recommendations, but they are likely to have little effect. Those who are seriously concerned about excess weight will find a way to lose it without any help from the government. Meanwhile, those who are unfazed by their rotundity will pay as much attention to the Health Ministry’s injunctions as chain smokers do to the warnings on packs of cigarettes. Opinion polls show that for a majority of Russians, excess weight ranks very low on their list of concerns.

Additionally, traditional Russian cuisine is at odds with the standards for a healthy diet. Due to Russia’s climate, few dishes call for fresh vegetables and fruits and many foods are salted or smoked. The most common meal on a Russian table is meat and potatoes with large quantities of bread: delicious, satisfying, but very high in calories. More recently, Russian culinary traditions have expanded to include fast food. When McDonald’s arrived on Moscow’s Pushkin Square in 1989, the first lines for Big Macs were five hours long. Today, McDonald’s is as ubiquitous and enduringly popular in Russia as it is elsewhere in the world. Walk into any large mall and you will find that there are still lines for Big Macs, even if the wait is closer to five minutes.

It may be too late to change the eating habits of Russian adults, but there is hope for Russian children. In many Western countries, childhood obesity is becoming endemic. In the UK, for example, 9.6 percent of children were obese in 1995; today the number has risen to 15.5 percent. In Switzerland, 22 percent of children are overweight; in Spain, 34 percent; and in Italy, 36 percent. In contrast, only 10 percent of Russian children are overweight. Before it’s too late, Russia needs to consolidate its success in the place where a child spends most of his or her time: school.

This fall, the Moscow city authorities began a bold experiment: They ordered the salt content in food prepared in school cafeterias cut in half. According to statistics from the World Health Organization, cutting salt intake lowers the risk of developing high blood pressure. To reduce the amount of salt in school food would seem an obvious step to take, but it proved counterproductive. Children simply stopped eating in school cafeterias. Parents raised the alarm and found a solution: they began giving their children salt shakers to take to school with them. The next stage of this less-than-successful experiment will reportedly be to cut the amount of sugar in school food. No doubt resourceful schoolchildren will start packing their own sugar bowls.

Of course, children are not to blame for the fact that under-salted food seems bland. It will take time for them to adjust to new eating habits. Parents want their children to be fed, but how much food they eat and the quality of that food is less of a concern. The bigger problem is that in Russia, few are concerned with their health: The high percentage of heavy drinkers and smokers attests to that. Sociologists maintain that in Russia, health per se is not an ideal or a matter of social prestige. It’s prestigious to have a house, an expensive car, a lot of money. But few seem to have given much thought as to how many years they will be able to enjoy all that abundance.

This attitude is not likely to change no matter how many new recommendations the Health Ministry promotes. We’ll just have to hope that Russia, so quick to adopt fast food, will be as quick to adopt what is now becoming the fashion elsewhere the world: a healthy lifestyle.