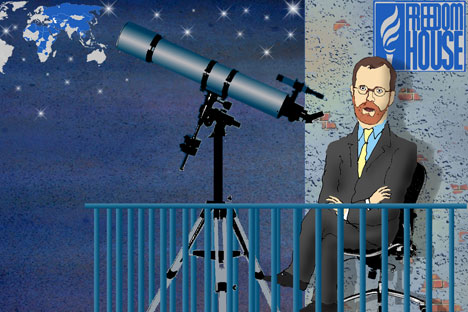 Former high-ranking diplomat David Kramer was named the executive director of Freedom House, an NGO staunchly critical of Russia, last month. Rossiyskaya Gazeta’s Washington, D.C., correspondent Alexander Gasyuk spoke with Kramer about how his experience as assistant secretary of state for democracy, human rights and labor during the Bush administration will influence his new role and his intentions to focus on democracy and human rights.

Since 2004, Freedom House has classified Russia as “not free.” How closely do you intend to monitor events there?

Given its size, geographical location and impact on other countries, Russia will remain very much a focus for Freedom House. I expect that there will be a lot of attention to what is going on with regard to democracy and human rights there.

Is there a single model of democracy by which all nations should be bound?

No. Each country moving in a democratic direction will develop in its own unique path based on its history, culture and traditions. But there are certain fundamental features of democracy like free and fair elections, independent institutions based on the rule of law, an independent judiciary and parliament and, of course, the ability to respect human rights. Vibrant civil society is also very important. However, I certainly don’t expect Russia or other nations to exactly follow the American, British or French models.

Russia’s experience with democracy is very short. How does one promote democratic institutions in such circumstances?

First of all, I don’t consider the 90s as a period of great democratic development in Russia. I do think that Boris Yeltsin’s government deserves a lot of credit for trying to control the situation after the breakup of the Soviet Union, but in my mind, Yeltsin didn’t launch a full-scale democratization campaign. It’s no secret that many Russians view that as a period of dislocation, of chaos and weakness. And I think when Westerners describe it as a truly democratic period, we tend to discredit the notion of democracy.

Fundraising will be a major part of my job and it won’t be easy. I am going to look beyond the government and look for private sources in other parts of the world.