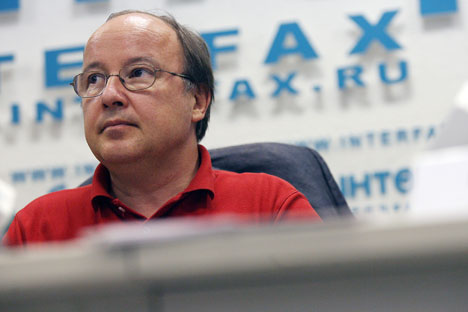 Gasping for air. Every time he came back to Moscow, the young son of a privileged Soviet diplomat who lived in Paris, Dakar, and Vienna, it was the same.

“I felt alien in our Soviet country. If felt as though it were a strange and terrifying world where it was hard to breathe and everything was depressing,” said Andrei Erofeev, reflecting on the forces that shaped him into a groundbreaking curator and one of the most provocative figures in Russian contemporary art. “I began to look for a way to survive in this world.”

Art was his salvation. But it has also been his curse, drawing him into battle after battle. In July, the forces of censorship landed a resounding blow. Erofeev and another curator, Yury Samodurov, were convicted on criminal charges of inciting religious and ethnic hatred with the 2007 exhibition “Forbidden Art.”

The judge imposed fines rather than prison sentences, but the criminal case is seen as another erosion of freedom of expression.

Erofeev, 54, was shocked. “Nobody expected it would end up in court,” he said. “Not only that, it was just a small exhibition; nothing major.”

The show at the Sakharov Museum, where Samodurov was director, consisted of 20 pieces Erofeev was stopped from including in two shows he assembled from Russia’s first and largest collection of contemporary art.

The story of that collection, Erofeev’s landmark creation, is also a love story—the Paris-born curator’s personal romance with contemporary art. And like most passionate affairs, it has brought its share of happiness and heartbreak.

The affair has its roots in the sharp contrast between life in the West and life in the Soviet Union. Searching for happiness in his homeland, Erofeev fell under the influence of artists around his older brother Viktor, a famous and provocative author.

“I saw that there was still some air left in our country, small communities of people who could think together,” said Andrei Erofeev, who lived with his brother, Viktor, as a teenager while their parents were abroad.

Together, they plotted Andrei’s future, Viktor said, figuring out “whether he was an artist or art historian.”  Andrei decided he loved looking at art too much to make it himself. “I was always seduced by the art of others,” he said.

It was the stagnant Brezhnev era when he began his doctoral dissertation at Moscow State University in art history, and in 1981, the 20th Century was strictly off limits. So Erofeev learned about modern art from the margins, by excavating nuggets of information from the appendices and footnotes of ponderous Marxist-Leninist critiques.

It was how things were done in those days, indirectly.

After university, he became a curator in an architectural museum. But again, he had a “second life,” full of real, living artists, not stodgy tomes or old buildings. “People lived double lives at that time,” he said.
Soon, his signature project—a collection of contemporary art—was born. Eventually, he accumulated around 300 works, which he stashed secretly at the Pushkin Museum with the help of friends who worked there. It was likely one of the few cases of someone smuggling art into a museum instead of out.

When the Pushkin offered him a job in 1986, he said he’d accept if the museum took the collection, too. When the museum refused, he and his cohorts had to smuggle the works back out. Extraordinary times demanded extraordinary measures.

His fledgling collection found a home of sorts in 1987, when he went to work at Tsaritsyno, a 17th-Century imperial retreat that lay in ruins Moscow’s outskirts. Perestroika was gaining traction and Tsaritsyno’s director was eager to show he was in step with the new, freer Gorbachev era.

“He needed a perestroika project,” Erofeev said. “And I was it.”

The director, a retired general, wangled space in a 12,000 square meter bomb shelter on the edge of Moscow. It was dank and depressing, but, said Erofeev,  “it was storage. It had security. We could really start collecting.”

With a free hand and a tiny budget, the young curator focused on large pieces and unconventional genres like installations and objects. He persuaded scores of groundbreaking artists to donate work. Eventually, the bomb shelter held about 3,000 pieces. Tsaritsyno had no exhibition space, but Erofeev mounted several shows abroad, giving the art wide international exposure.

“He collected the best single collection of that art,” said Nicolas Iljine, a Russian art expert in Frankfurt who served on the Kandinsky Prize committee with Erofeev. “And finally, he managed to show it. ”

After a few years, the collection was orphaned again when Tsaritsyno changed hands, and this time a major museum stepped in. Collector and collection went to the Tretyakov Gallery, one of the nation’s biggest repositories of Russian art. Erofeev became the museum’s first-ever curator of contemporary art.

As the champion of contemporary artists, he clashed repeatedly with his bosses over exhibiting the most provocative works. The breaking point came when his superiors yanked several pieces from a Paris exhibit in late 2007. It was an international scandal.

Another scandal erupted that year with “Forbidden Art” at the Sakharov, which consisted of pieces the Tretyakov had refused to let Erofeev exhibit at the museum. The rumblings about the show, which was shut down after only a few days, soon became an uproar.

By 2008, he had been fired from the Tretyakov, where his superiors cited managerial shortcomings. Colleagues say they were not surprised. “He’s a very intelligent guy, a very dedicated guy. But he’s not a very good administrator,” Iljine said.

And even admirers say Erofeev can be hard to work with, stubborn and unyielding. “He’s not an easy guy,” said emigre art historian Konstantin Akinsha.

Erofeev soon found himself on trial as well as unemployed. The show had included images of Mickey Mouse as Jesus Christ, an icon made of black caviar and a crucified Lenin _ plenty to offend, it seemed. Erofeev and Samodurov, the Sakharov director, were prosecuted at the insistence of the Russian Orthodox hierarchy and ultra-nationalists.

Despite the ordeal of a 14-month trial and his conviction, Erofeev is undaunted, planning new exhibits as a freelance curator. But the case sent shivers through the Russian art world.

“All these scandals have created a certain climate of fear,” said Akinsha. “Not everybody is such a hero as Andrei. Other people understand the danger. And they are applying that very old device: self-censorship.”