Titanium valley emerges in the mountains 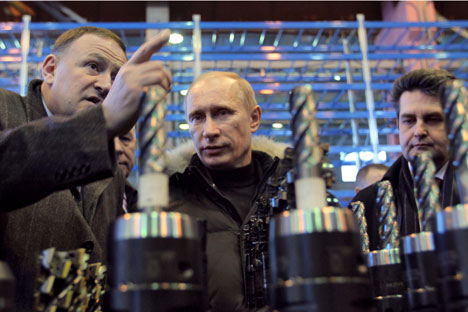 Prime Minister Vladimir Putin said Thursday that the government planned to create a “Titanium Valley” special economic zone in the Urals Federal District, which may cost 40 billion rubles ($1.3 billion) and will make products for the aircraft, automotive, shipbuilding and medical industries.

“We'll issue a governmental decree in the coming two weeks on creating a special economic zone here with special benefits, including customs privileges,” Putin said during his visit to the Sverdlovsk region.

Putin, who visited facilities of the region's key industrial enterprises, including the world's largest titanium manufacturer VSMPO-Avisma, said the funds for the economic zone would be appropriated in the 2012 budget, while building infrastructure would start next year.

The new economic zone will create “a new technological base” for the titanium maker and allow it to attract new partners, Putin said.

The project will create a total of 20,000 jobs, Bloomberg reported, citing documents provided by the Sverdlovsk region government ahead of Putin's visit.

A total of 20 companies involved in shipbuilding, power-plant engineering, petrochemicals and medicine may participate in the project, said Sergei Chemezov, head of Russian Technologies, which owns VSMPO-Avisma.

Chemezov said Russian Technologies planned to attract current partners of the titanium maker, and partners of Boeing, a stake holder in a joint venture with VSMPO-Avisma.

Among the companies which may launch production in the Titanium Valley are Rolls-Royce Group and Goodrich — which supplies parts for the aircraft and defense industries, Chemezov said.

VSMPO-Avisma has invested a total of $700 million in modernization over the past several years and plans to invest another $500 million by 2015, said the company's head Mikhail Voyevodin.

The investment volume in the Sverdlovsk region will reach the 2008 pre-crisis level of 240 billion rubles this year, said the region's governor Alexander Misharin, according to the government’s web site.

The new mill, whose capacity is 950,000 metric tons of steel annually, will supply solid billets for pipes to ChelPipe. The facility will reach full capacity next year.

During his visit to Uralsky Lokomotivny Zavod, a joint venture between Siemens and Russia's Sinara Group, Putin said that manufacturing of Russian Railway's high-speed Sapsan trains might start in Russia.

“Prospects are good,” Putin said. “Good suppliers allow to localize production not only of Lastochka, but other new generation stock as well, for example Sapsans,” he said, RIA-Novosti reported.

The Sapsan trains traveling between Moscow and St. Petersburg and Moscow and Nizhny Novgorod are currently supplied by Siemens.

The German concern signed contracts with Russian Railways, or RZD, in 2009 and 2010 to supply 54 Desiro Rus trains, also known as Lastochka, which will start running during the Sochi Winter Olympics in 2014.

The sides also signed a memorandum in July to supply another 240 trains over the next 10 years.

RZD may partner with Siemens in implementing a program to develop high-speed railway traffic in Russia, Putin said, adding that the program could include maintenance of the rail beds, as well as manufacturing of rails and stock.

The program could become a big joint project with the German company “for many, many years to come,” the prime minister said at a meeting with Siemens president Peter Loescher.

Gapanovich said local manufacturing of high-speed trains might be launched in the future, though for now the infrastructure is not ready.