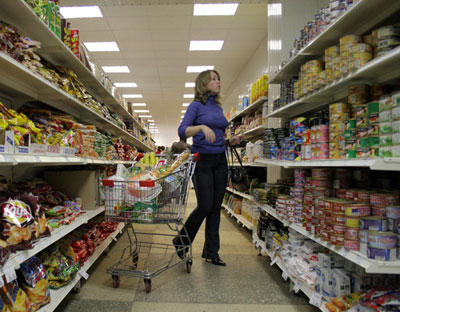 Four hundred aspiring architects and artists camped on the Greek island of Vidos, just off Corfu, this autumn, creating whimsical architectural visions inspired by the environment. The result was a spectacular showcase of monuments made from natural materials. Some of the work seemed to be inspired by the Constructivists of the 1920s. These creations competed with a breathtaking work environment on the tiny island of Vidos; it was the first time the GORODA Architecture Festival left Russia since its inception in 2005.

GORODA, which aims to find a balance between modern architecture and the environment, has been held twice a year since 2005. The festival brings architects, designers and other creative artists to an unusual location and allows them to transform the site. GORODA, which has its roots in the same kind of back to nature utopia as the , began at the Sukhanovo Architects’ House of Leisure on the former estate of the Volkonsky princes, an architectural monument constructed in the 18 and 19th centuries. In the winter of 2007, the organizers decided to hold the festival in the Russian North, outside the Kirillo-Belozersky Monastery. That decision, which was prompted by a desire to use snow as a building material, started the tradition of a nomadic festival.

The theme of the most recent festival was “City of the Sun,” borrowed from a philosophical work by Tommaso Campanella, which explores the idea of utopia. The 400 participants were asked to offer their architectural visions of Europe’s philosophical and theological movements from ancient times to the present day. The highly competitive festival, which was judged by acclaimed architects, became a whirl of chainsaws in search of an emblematic monument. The nearest stores were on Corfu, and participants had to bring their own tools. Festival attendees also heard lectures in astronomy, talks by famous Russian architects, and watched films on architecture.

By the end of the festival, a path cut through a dense forest on the island, leading to an abandoned fortress and then on to a square. All around the square were architectural installations on different levels. On both sides of the square were two labyrinths, Tao Labyrinth (from the BRM team) leading to the highest level of “non-doing”, and the Labyrinth of Reason (“Slaksy” team), symbolizing the conflict of opposites. The Philosophical Library (Asadov & Partners architectural studio) was floating comfortably on the water, not far from the shore, yet it could only be reached by boat. A wooden box titled “Uroboros,” impressed the jurors with its intricately interweaving parts. Ivan Ovchinnikov’s “Bridge to Nowhere” hovered high above ground, and Duduka Lighthouse, built by “Gagayagaya,” rose at the very edge of the square, offering a breathtaking view.