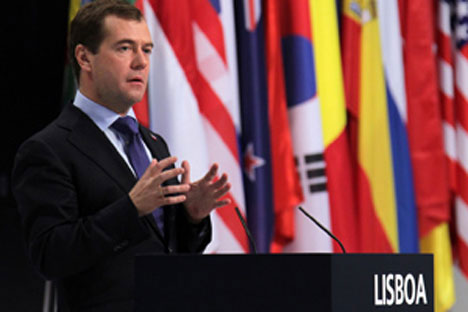 The past week was everything but boring for those watching Russia’s foreign policy. On Tuesday, word came out of Washington that the New START treaty signed by Presidents Dmitry Medvedev and Barack Obama last April is unlikely to be ratified during the lame duck session of U.S. Senate this year. Branded as a signature achievement of the Obama administration’s policy of “reset” with Russia, the treaty was expected to be quickly approved by the Senate and the Russian Duma and was supposed to lead to further arms control negotiations and closer cooperation between the two countries in other areas. A delay in ratification of the treaty, not to mention the prospect of its eventual death on the Senate floor, is a serious setback for the American president and his Russian counterpart as well.

But on Saturday, President Medvedev traveled to Lisbon to attend a meeting of the Russia-NATO Council. The results of this Lisbon summit have been so significant that many, including Medvedev himself, called the summit “historic.”

Characteristically, the participants of the summit have not produced too much paperwork. One of the few public releases was a joint review of the security threats of the 21st century, a document Russia and the NATO Council have been working on since last year. Another document announced the enlargement of a joint Russia-NATO project that trains anti-narcotics law enforcement personnel in Afghanistan, Pakistan and Central Asia. Further agreements in this area included the increased transit of non-lethal NATO equipment to and from Afghanistan through Russian territory. One more joint document paved the way for the creation of a trust fund, with future contributions from all NATO member countries, to pay for the technical maintenance of Russian Mi-17 helicopters employed by the Afghan air force.

But it was the Joint Statement of the Council that has attracted the most attention. In the statement, Russia agreed to cooperate with NATO on building an anti-ballistic missile defense system (ABM) in Europe to protect Russia and 28 members of the alliance against possible missile attacks from “rogue” countries. The deployment of these ABM systems in Europe has long been the most contentious issue between the two sides, and their willingness to cooperate on this all-important security issue signifies a new era in relations between the former Cold War adversaries. German Chancellor Angela Merkel got it precisely right when she said on Saturday that the Cold War was finally over.

It is tempting to invoke Winston Churchill’s famous “the end of the beginning” quote and to consider the Lisbon summit as not simply a turning point in Russia-NATO relations, but as a point of no return. That would be premature. The nascent common understanding, however welcome, is still fragile and susceptible to future setbacks. It would then be more prudent to call the summit “the beginning of the beginning.”

Challenges to the “reset” in Russia-NATO relations are real. There is a substantial split in how the Western European countries and countries in Central and Eastern Europe view Russia, with the former favoring closer ties with Moscow and the latter still harboring a deeply rooted animosity toward it. There are perhaps more opponents of better relations with Russia among newer members of NATO than among Republicans in U.S. Senate.

Improved relations with NATO will likely meet some opposition in Russia, too. The images of a military threat emanating from NATO over the past 60 years has created a feeling of mistrust toward this organization among ordinary Russians; the recent spat over NATO expansion into Ukraine and Georgia only made these feelings stronger. Some hopeful signs are nevertheless emerging: A recent Levada Center poll has shown that 33 percent of Russians (a full 10 percent more than a year before) now support closer cooperation with the alliance. However, mindful of the deep scars that the Afghan war of the 1980s left in the Russian collective psyche, the Russian leadership would be wise not to overemphasize the military component of the cooperation. Rather, it should stress the possible benefits of joint anti-narcotics operations, something that will resonate with a Russian public that considers drug addiction one of the nation’s major problems, second to only corruption.

The apparent success of the “reset” in Russia-NATO relations can provide a couple of lessons to those concerned about setbacks in Russia’s relationship with the United States. First, the security cooperation between Russia and NATO comes atop a solid basis of economic cooperation, especially with countries such as Germany, France, Spain, and Italy; such a foundation is almost non-existent in U.S.-Russia relations. Second, in contrast to the “reset” between Moscow and Washington, in which all further improvements in relations have become a hostage of sorts of the New START treaty, the cooperation within the Russia-NATO Council is more diverse and includes, in addition to the security component, Afghanistan, counterterrorism, and fighting piracy at sea.

There was one more aspect of the Lisbon summit that was difficult to miss. As a smiling President Medvedev was posing in front of cameras with the smiling leaders of European countries, there was an acute feeling that after years of isolation (often self-imposed) and painful searches for its place in the world, Russia began gradually moving to where it truly belongs: in Europe.