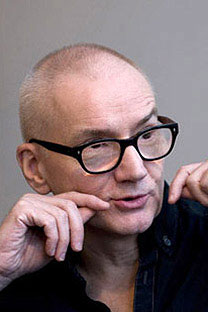 Over the last 20 years, Igor Kovalyov has been part of the commercial success of the American cartoon industry, building his own reputation as one of the leading film animators to come out of the Soviet Union. Now he is making a return to Russia to rebuild its cultural heritage in animation.

“I hope this is my final decision. I like America, but I am a European man and I missed Moscow,” Kovalyov said during an interview in his Moscow apartment.

Kovalyov, 56, started his career in Russia before becoming a part of the last breed of Soviet animators that left for the United States during the turbulent 1990s. It was working on the comedy series “The Roly-Polies Are Conducting the Investigation” that brought him early recognition. Based on two friends that investigate unlikely crimes such as the theft of elephants by international gangsters, the comedy show’s popularity was a first indication of Kovalyov’s aptitude for creating unique images that have instant appeal.

But it wasn’t until Kovalyov worked as art director with late animation director Alexander Tatarsky on the film “Plasticine Crow” (1981) that the animation world started to take notice. This absurdist short film, which many saw as a parody of Soviet times, became one of the country’s most beloved cartoons.

Kovalyov’s lack of English still meant that he had to start from scratch when he arrived. It wasn’t until he was invited in 1989 to work at Klasky Csupo, a major and now Hollywood-based independent animation studio, that his career started to take off. He began working in the studio for one of the most famous family cartoon series, “The Simpsons.”

“During my first two weeks in the United States I was working on ‘The Simpsons,’” he said.

Even with his limited knowledge of English at the time, Kovalyov said he didn’t find there to be such significant differences in the worlds of Russian and U.S. animation. “Artists had the same spark in their eyes, like back home, and maybe their pencils were better quality,” he said. “But nobody drank at work,” he added, smiling. “That was a big difference.”

At Klasky Csupo, Kovalyov worked his way up to director of some of the biggest names in children’s television. In 1992, he joined “The Rugrats,” distributed by Nickelodeon, a leading American cartoon channel. He eventually went on to design two of the characters for the show — Raptor’s Wagon and Baby Dill — and was asked to direct the first “Rugrats” movie in 1998. It was a box office hit in both the United States and Britain, won two awards and was nominated for a further six. Later he joined the studio for the program “Aaah!!! Real Monsters.”

Kovalyov recalled that at about the same time, he was invited to work for Disney, but he turned down the offer. “I grew up on their cartoons, but I knew that their style was not my cup of tea,” he said.

It was his lengthy stints in American commercial animation that eventually led him to seek greater creative freedom and introduce personal experiences and cultural origins into his work. During the same years, he was co-directing a trilogy of films with Tartarsky, starting with “His Wife Is a Hen” (1989), “Andrei Svislotsky” (1991), “Bird in a Window” (1996) and later “Flying Nansen” in 1996.

Success was patchy. Animation historian Christopher Robinson has said “all of Kovalyov’s work is extremely personal,” and as a result Kovalyov has been described in animation circles as a master of internationally acclaimed animation films.

In 2005, Kovlyov embarked upon his first fully independent film. With the support of Hungarian-born studio founder Gabor Chupo, Kovalyov was able to direct “Milch,” or “Milk.” Based on the director’s childhood in Kiev, it was his first opportunity to explore his passion for independent art-house direction. “Chupo allowed me to work on my own art-house project, otherwise impossible in the U.S. I always thought that I stayed in the States because of him,” Kovalyov said.

Though Kovalyov was not able to finish the film during his time at Chupo’s studio without the financial support of Russian friends, such as lawyer Genrikh Padva, it received far greater success than his previous films. The film collected three international awards and was nominated for one.

Now back on home soil, he wants to bring his U.S. experience to Russian animation and make a cartoon series for Russian television. “We need something like our own version of ‘The Simpsons,’” he said.

He also said he wants to share his American experience with would-be Russian filmmakers. “I like to work with youngsters. Russian cartoons need fresh blood.”

Though U.S. cartoons such as “Toy Story” and “Madagascar” occupy the top positions in the Russian cinema charts, the country’s own domestic industry has resurged in recent years. It produced several popular films, including “Belka and Strelka,” the story of two famous Soviet space dogs. “Timeshares,” one of the country’s most popular cartoons, won a contract with the highly acclaimed 4Kids Entertainment network in 2008.

Kovalyov declined to speak about his plans since his return to Russia, saying he is negotiating with various producers about project ideas. He said his major concern is to do his first Russian work well. “I can’t do my first television series badly, because of the impact it could have on my reputation back home.” But he said that art-house projects would remain a priority for him. He is currently finishing a cartoon called “Before Love.” “A classic love triangle — love meets blood in the thick of the forest,” he said.

His dream, though, remains to direct a live action film. “I watch them, and I am always inspired by the ideas,” he said. “One day I hope to make one, but when I do, I won’t be thinking about the public.”