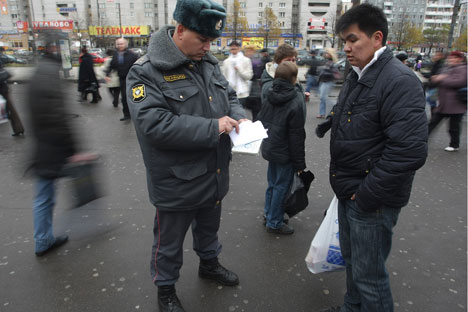 Russia’s Federal Migration Service promises that Russians will soon be able to move around the country freely, like Europeans in the Schengen Zone, by simply informing officials of their place of residence by mail. The government might go even further, abolishing domestic passports and the little registration stamps inside them. Compared to the promised passport revolution, the new temporary residence registration procedure scheduled to take effect on Jan. 1, 2011 seems like no big deal.

You have to go back all the way to the 1960-1970s to see when the institution of official residential registration lost much of its Stalin-era draconic severity. Following the collapse of the Soviet Union, which used residence permits and restrictions to encourage and punish its citizens, residence registration seemed to have disappeared forever. And yet, despite simplified registration rules that allow Russians to live in other regions for up to three months without stamps in their passports, plus the absence of legal grounds on which to deny temporary registration, the popular expression “you are nothing without a piece of paper” still retains its relevance.

Russians are not as inert as they seem to be. Forty-one percent of those employed are willing to move to another place in search of a better job, although 42 percent are unwilling to do so, according to research by SuperJob.ru. Both groups are concerned not just with expensive housing and the lack of social ties, but also with the difficulty in getting registered. According to a poll from the All-Russia Public Opinion Research Center (VTsIOM), a third of respondents faced various problems in receiving permanent or temporary registration: almost half of them were forced to stand for hours in long lines, 26 percent found passport office hours inconvenient, 23 percent were put off by crass and obtuse personnel, 12 percent were asked for additional documents not required by law and faced extortion, and 10 percent were denied registration altogether.

Instead of trying to capitalize on unlawful regulations that prosecutors and courts—including the Constitutional Court—have voided, bureaucrats have been inventing new ways of profiting from this Soviet-era institution. Regional and local officials have barred citizens from registering their own apartments, let alone from letting their relatives move in; visa services have refused to register army officers and their families until they receive service housing.

Meanwhile, people not residing at their place of permanent registration face certain problems: some employers are reluctant to take on outsiders, and it is also more difficult for these people to get medical insurance, get their children a place in a kindergarten and take out a loan. Finally, Russians with a temporary residence registration have difficulty getting an international passport. To buy a car, such people have to go to where they are permanently registered, or, alternatively, give power of attorney to a local resident.

The current registration procedure, despite its seeming simplicity, complicates the ability of job-seekers to move from depressed areas to developing regions where there is work. In the 1990s—the era of rampant change—interregional migration of Russians stood at between 1.1 and 1.5 million people. By 2005, that figure dropped to 816,000 people. Thanks to simplified registration procedures, the flow edged up to 862,500 in 2008, but then fell back to 766,500 during the 2009 economic crisis. The government program for fighting unemployment and providing retraining, which encourages people, among other things, to move out of depressed areas, has so far been of little help. Only 522,000 people have moved to different locations over the past eight months. The forthcoming passport revolution, which will include dissolving the modified Stalin-era institution and simplifying registration rules, could help overcome difficulties in the territorial redistribution of the working-age population, supporting both the labor market and economic development as a whole.