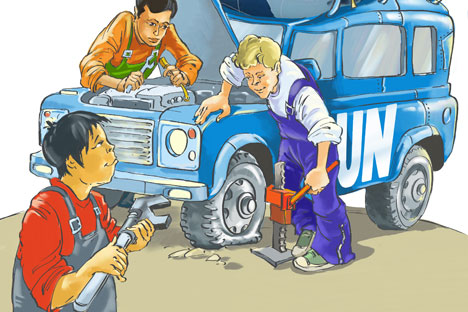 A week after US President Barack Obama announced support for India's bid for a permanent seat in the UN Security Council, the foreign ministers of Russia-India-China (RIC) trilateral grouping met in the central Chinese city of Wuhan on November 14-15.

The UN reforms were among pressing global issues discussed by India's S.M. Krishna, China's Yang Jiechi and Russia's Sergei Lavrov. But a breakthrough eluded New Delhi as the meet ended with a joint communique that backed the UN reforms, but did not go beyond “appreciating the role played by India in international affairs.”

Russia has been a strong backer of India's candidature for a permanent seat in the UNSC, but China refused to end its ambivalence – bringing to the fore competing ambitions and agendas among the two veto-wielding members of the Security Council and an aspirant for the prized seat on the global high table.

This dissonance on critical issues may give fodder to some sceptics to write off the RIC as just another talk shop. But such a grim prognosis is widely off the mark. If anything, it only underlines the growing importance of consultations between the trinity of emerging powers that hold the key to the evolving 21st century world order.

Significantly, the 10th trilateral meeting in Wuhan was held weeks after the ASEAN endorsed the admission of the US and Russia in the East Asia Summit and the meeting between the leaders of India and China in Hanoi amid sharp differences over issues such as the Chinese stapled visas for Indian citizens of Jammu and Kashmir.

The trilateral ended with the three countries reiterating their call for creating a multi-polar world order while making it clear in the same breath that it did "not target any third country” – a euphemism for the US. The joint communique “stressed the need to develop an open transparent inclusive and balanced security and cooperation architecture in the Asia Pacific region based upon universally agreed principles of international law and giving due consideration to the legitimate interests of all states.” Intense quibbling preceded this formulation. Russia and China were in favour of the joint communique speaking of a security architecture for the region based on the “non-bloc” principle, an all-too-evident reference to the US' politics in the region. India, however, managed to get the other two to accept a more neutral phraseology.

India, Russia and China shared concern about the deteriorating security situation in Afghanistan, but decided to keep their trilateral cooperation on the issue “within current mechanisms” for now. The three resolved to intensify counter-terror coperation, but Beijing is understood to have stalled an Indian proposal to include a reference to jointly working to eliminate “safe havens” for terrorists, a reference to Pakistan and its role in Afghanistan.

Such differences of approach and views are but natural among the three emerging powers, and it is precisely for this reason the trilateral was mooted over a decade ago by then Russian Prime Minister Yevgeny Primakov to offset Washington's unipolar hegemony and to reduce trust deficit among key stakeholders in an emerging Asian century.

The trilateral also promotes deepening of cooperation in diverse areas including agriculture, health, climate change, disaster mitigation and global economic issues that can transform the lives of ordinary people. The proposal to link up innovation centres in the three big economies, the nucleus of global economic growth, is one such idea that intertwines a shared ambition for national renaissance in the three countries and their collective will to have a bigger say on key global issues. Russia’s Lavrov touched on the heart of the trilateral when he said it is part of international network diplomacy and deals with the problems of real people. One of the proposals being considered is to link Banglaore with the new Russian innovation centre at Skolkovo.

Three may be a crowd, but in this case the trio has no option but to manage their differences and competing postures as the three countries have a far bigger stake than anyone else does in each other’s progress and in nurturing peaceful, harmonious relations with each other. While the idea of G2 is a chimera and the UN Security Council reforms still a distant prospect, the RIC is a microcosm of an emergent Asian century that underlines the need for constant trust-building conversation among three key pillars of a multi-polar world.