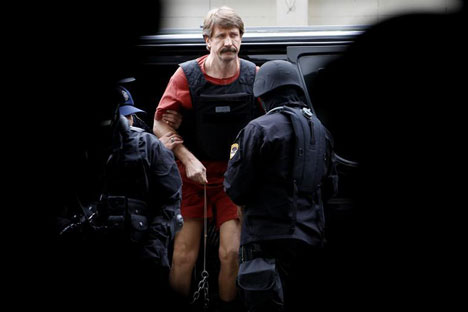 Viktor Bout arrives in the U.S. after years of wrangling with Thai authorities.

On Nov. 16, Thai authorities extradited Viktor Bout to the United States to face charges on arms trafficking and working with terrorist groups. The Russian Ministry of Foreign Affairs has accused the Americans of exerting “unprecedented political pressure” on the Thai government and judicial authorities; the ministry vowed to continue to defend Bout’s rights as a Russian citizen.

“The whole story is an example of flagrant injustice,” said Russian Foreign Minister Sergei Lavrov. The ministry released a statement labeling Bout’s extradition as “unlawful.” The document also stated: “In defiance of two decisions by the Thai criminal court, which found Mr. Bout’s guilt unproven, he was handed over to U.S. law enforcement officials after two years of imprisonment in Thailand. From a legal point of view, this cannot have any reasonable explanation or justification.” The Bout case “calls into question the Thai judicial system’s independence, as well as the Thai authorities’ decisions.”

In an interview with Nezavisimaya Gazeta, Konstantin Kosachev, chairman of the State Duma Foreign Affairs Committee, said that Russia’s stance is completely appropriate: The Russian authorities are doing all they can to make sure that Bout’s rights are upheld. At the same time, although they doubt that the investigation can be fair and objective in the United States, the Russian government is refraining from interfering.

“Russia has serious grievances regarding how Mr. Bout’s rights have been observed since he was detained,” said Kosachev. “There are big question marks about the legality of his extradition. But there is no use crying over spilled milk, so further measures should be taken now to protect Mr. Bout’s rights in the United States or anywhere else he may end up.”

Another source stressed that such behavior on the part of the United States cannot be tolerated: “This was a very heavy blow to our mutual trust and partnership. It will affect the climate for cooperating with each in the future. There is no need to resort to sanctions, retaliation or take a further stand here. Having said that, our partner’s actions call their sincerity into question.”

Kosachev believes that the right thing to do would have been to hand Bout over to Russian authorities and carry out a joint investigation that would include all the relevant parties. “The fact that the Americans twisted the Thai authorities’ arms and brought Bout to the United States causes serious doubts about the pending trial’s impartiality and fairness,” said Kosachev.

Bout, who was reportedly the inspiration for the main character in the Hollywood blockbuster “Lord of War,” was arrested in Bangkok in March 2008 at the request of the U.S. authorities. He was detained after he allegedly struck a multi-million-dollar arms deal with American agents disguised as rebels from the Revolutionary Armed Forces of Columbia (FARC). Washington is also accusing Bout of conspiracy to murder U.S. citizens and of supporting terrorism. Bout denies all the charges. He admits only to once having owned an air carrier business that shut down in 2001.

The New York Times reports that Douglas Farah, one of the authors of a book on Bout, speculates that U.S. authorities were bending over backward to get their hands on Bout because of his knowledge about the activities of the Russian intelligence service over the past several decades.

Thai courts twice over the past two-and-a-half years refused to extradite Bout to the United States. Thailand’s Court of Appeals, however, reversed a lower court decision and handed him over to the U.S. authorities. None of Bout’s relatives, lawyers or Russian embassy officers was informed of the extradition. Two police escorts, one a decoy, were involved in delivering Bout to the airport. A plane with U.S. Drug Enforcement Administration agents on board was already waiting at the airport, while the tarmac was closely guarded by snipers and guards with submachine guns.

Andrei Dvornikov, head of the Consular Section at the Russian Embassy in Thailand, said that the Russian diplomatic mission did not receive any official notice of Bout’s extradition. Bout's wife, Alla, and his Thai lawyer, Lac Nitiwat, also said that they learned of Bout’s extradition after it had already taken place. They say that they visited the detainee on Monday when nothing seemed out of the ordinary. Nitiwat said he would file suit against Thai judicial authorities, whose actions he deems to be in violation of the law.