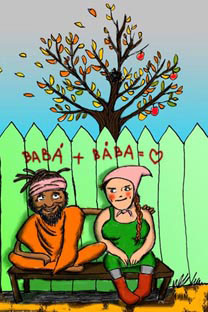 It appears as if the brief return to warm weather is over, and Russia has settled into the long months of cold. That last window of sunshine, what english speakers call Indian summer, is called 'babie leto' (baba's summer) in Russian.

Baba is one word for woman in russian. So why do women get this time of year? The most often-cited explanation is that this was the time of year when the work in the fields was finished, and women got down to various types of housework.

As the latter explanation indicates, baba was used for peasant women; Dal’s dictionary defines it as referring to: a married, lower-class woman, especially not a very young one.

For example, Alexander Amfiteatrov wrote a series of short stories in the early 20th century about people marrying above and below their class called «Baby i damy». Obviously this title refers to higher- and lower-class women, but a good translation is difficult - more on that in a minute. I did see it translated in one place as “Women and Ladies”, which doesn't really make the distinction clear.

So baba was used to refer to peasant women, and this meaning evolved somewhat over time. Consider what one of my professors said when talking about Mayakovsky's romantic troubles: "Lilya Brik loved Mayakovsky as a great poet, but he just loved her as a woman". Clearly he wasn't trying to say that Mayakovsky imagined his beloved as a peasant, but that he saw her as “simply a woman”.

In its modern usage, baba can be used in colloquial speech for any woman, also regardless of age or social standing, but there's definitely something derogatory in this use of the word: "So anyway, I agreed to meet up with these…" What to call them in English? Dictionaries always suggest “broads” or “dames”, both of which sound Frank Sinatra-era old-fashioned to me. Even “chicks” sounds a little old-fashioned now, while any curse word would be too harsh, so the jury's still out on that one.

This derogatory tone can be heightened with a negative suffix, -ischa for one. Now, this suffix often denotes the great size of something, and babischa can mean a heavy, unattractive woman. But it can also just mean that the speaker thinks the woman is unpleasant in some other way (nagging, mean, etc.).

For example, someone was recently complaining about the girlfriend of a mutual friend: "That babischa definitely has him under her thumb/ wears the pants in the family.) This has nothing to do with her size, just the fact that she's allegedly not a nice person. Here again, “bitch” sounds way too harsh as a translation, but we don’t use words like “shrew” or “harpy” in casual conversation so much anymore.

On the more positive side of things, there are a couple of diminutive suffixes often used with baba to mean “grandmother”. First, there's the standard babushka, and the two other most common names are babka, which can sound rather colloquial and harsh, and babulya, which, on the contrary, is maybe too sweet. In addition to addressing their grandmothers with these names, people can also use them in colloquial speech to refer to any older woman; as with other diminutive suffixes, this can sound somewhat disrespectful. Again, babushka for an older woman is more or less okay, babka is much less polite, and you might only use babulya if you're trying to placate the woman in question. baba by itself can also mean grandmother/old woman. Some Russian fairytales start off this way: "Zhili-byli ded da baba... (Once upon a time, an old man and his wife...).

I can't end without including the “best” derogatory male-chauvinist Russian proverb I've heard so far: (A chicken is not a bird, and a baba [woman] is not a human being.) Nice. Of course, Russia doesn't have a monopoly on sayings of the kind; here's a gem from an old dictionary of English proverbs: A woman, a dog, and a walnut tree, the more you beat them the better they be.

Sara Buzadzhi is an English teacher and translator in Moscow.