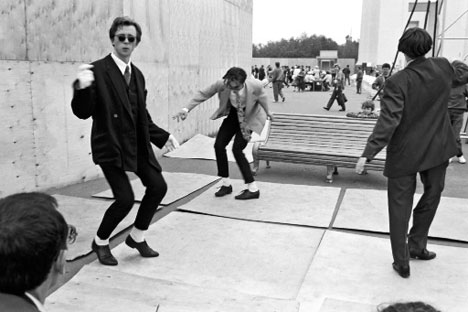 Narodniki (Populists)
Flourished in the 1860s-80s.

Lifestyle: today Narodniki might be called volunteers. Thousands of young people dropped out of school, left their families and “went to the people” to teach, cure and propagate their views. Some were content to teach peasant children to read and write, while others hoped to incite peasant uprisings. Later many of them became disenchanted with their missionary work and took up bombs and revolvers instead of books.

Values: equality, being a member of the working class, revolutionary struggle, building an ideal world.

Values rejected: private property, lust for gain, exploitation, czarism, capitalism.
Lifestyle: conscientious worker activists who, unlike their comrades who got drunk in the evenings, pored over revolutionary pamphlets and planned strikes. Confrontations often developed into bloody clashes with police and the Black Hundreds.

Main works: writings by Lenin, Marx, Plekhanov and other thinkers, or rather, pamphlets containing a digest of their ideas. The newspapers Iskra, Revolutsionnaya Rossiya and Rabocheye Delo (Workers’ Cause).

Lifestyle: writing poetry, painting and composing music. They founded their own magazines and galleries and formed artistic and poetic groups. They gathered at cafes or in apartments to hold soirees with endless discussions about creative principles. While constantly mixing with one another they paraded their individualism. The poet Konstantin Balmont wrote: “I hate humanity/ I flee it in a hurry/ My only country is / my desolate soul.”

Lifestyle: They were atheists and anarchists. Vadim Rudnev, author of A Dictionary of XX Century Culture, writes: “The avant garde seeks to engage and shock the public. To shock, scandalise and titillate – avant garde art cannot be imagined without all this.” The followers of avant garde dreamed of changing life at least “on the global scale”. Some of their works have not been decoded to this day, one famous example being the “The Black Rectangle” by Malevich.

Lifestyle: The students usually lived in tents with all the attributes of outdoor life: singing around a bonfire, picnics and contests, be it on the football pitch or at work. The key features of appearance are a worker’s blouse with chevrons and insignia of the construction team.

Lifestyle: the Communards’ aim was to bring up “the new man” one hundred percent prepared to live in a commune. It began at school: children were taught according to a new method, a mixture of boy scouts, teaching of creativity, group psychotherapy and games. Pedagogical teams involved more than 60,000 students, according to some estimates.

Lifestyle: Weatherproof jacket and a rucksack, all tarp and a minimum of comfort. A necessary attribute was the guitar. The lifestyle involved regular outings that could be to the countryside around Moscow or as fair afield as Altai and Pamir mountains. Often such a group was a mini state in which images of the ideal world were constructed.

Main works: songs by Vizbor, Gorodnitsky, and Okudzhava, to name but a few.

Lifestyle: copied the trends among advanced youth in Europe and America. Young men wore bright-colored shirts and ties with matching socks, loose-fitting checkered jackets and wide-brimmed hats, “a slap in the face of public taste” which was all about grayness and uniformity. Pompadour haircuts imitating Elvis Presley were de rigueur. The girls were heavily made up and wore gaudy dresses. They had their own slang, some of which has survived to this day, for example, khata “apartment”, chuvak “one of their lot”, soksy “socks”.

Lifestyle: A typical hippy looks just Jesus Christ in the flesh: long hair, cheap simple bright-colored clothes, and ethnic trinkets symbolising rejection of racial and cultural differences. A frequent attribute was a ribbon on the forehead to prevent one “going off one’s head”, a wristband with some bric-a-brac, usually a memento given by a fellow hippie. They hung out in the streets and squares, sang soulful tunes to the strains of a guitar, recited poetry and smoked pot. They often moved about by hitching rides.

Lifestyle: The first and most eye-catching sign of a punk is spiky hair. Other attributes include a bomber jacket, worn jeans tucked into high combat boots. The apparel is decorated with skulls and other pieces of metal.

Values: sentimentalism, individualism, living in their own imagined world, mysticism.

Lifestyle: You can always tell a Goth by the white face with black eye and lip liner, and black clothes beneath a cloak or floor-length cape. The Goths usually have the cult of death and fetishes connected with the nether world.

They hang out in deserted buildings, at graveyards and in other dark places. They read mystic books, stage various medieval rituals and listen to Gothic music.

Main works: songs by the groups Antisisters, The Guests and Otto Dicks.

Values: Emo is short for emotional, which implies sensitivity, love, friendship and individualism.

Lifestyle: The Emos are clad in black and pink and grow long forelocks. It is often hard to determine an Emo’s sex: boys and girls look absolutely the same.

“Don’t hurt Emos. They cry all the time anyway” read a notice at one youth forum. Indeed, Emos are usually in a depressed state, more often than not because of unrequited love. But it came as a surprise to many that Emos experience positive emotions too. The Emo’s mood can be told by the color of his/her clothes: if black predominates he/she is in a down mood, if it is pink, he/she is happy.

Main works: songs by the groups JaneAir, Origami, Maio and Ocean of my hope.