Much ado about taxes 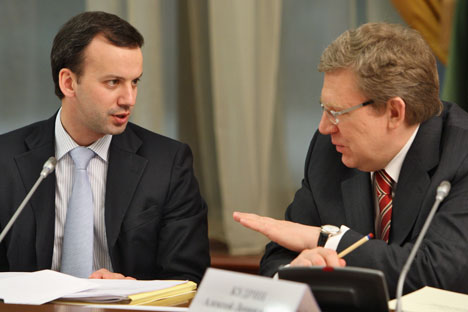 At a recent conference commemorating the 20th anniversary of the Federal Tax Service, Finance Minister Alexei Kudrin and Presidential Economic Aide Arkady Dvorkovich addressed the question of rising taxes. Their answer wasn’t what the business community wanted to hear: there will apparently be no fiscal relief for at least three years.

Both Dvorkovich and Kudrin tried to distance themselves from the unpopular hike in social insurance contributions, which will come into effect on January 1, 2011.

Meanwhile, Federal Tax Service Head Mikhail Mishustin and Kudrin reminded the audience of the main achievements of recent Russia’s fiscal reforms: The number of taxes has been reduced from more than 100 to 13 (plus four special tax regimes), the greatest Russian know-how – a flat personal income tax – has been implemented, and the corporate profit tax rate has come down from 35% to 20%.

The moderator, State Duma Deputy Andrei Makarov, then steered the discussion away from the past and to the immediate future. Forty days from now, for the first time in Russia’s post-Soviet history, entrepreneurs will face an increase in taxes by a whopping 800 billion roubles, or 1.6% of GDP. Small businesses operating under the simplified tax regime will see their rate more than double, from 14% to 34%. In total, tax increases for 2011 will make up 2% of GDP, or a trillion roubles (in addition to social taxes, petrol, liquor, and tobacco excises will also rise).

“Raising taxes is a global trend,” Kudrin said in remarks that were less than encouraging for the audience. He reminded that the reserve fund is running out, but the budget deficit problem refuses to go away (the Ministry of Finance now expects the shortfall to reach 4.6% of GDP in 2010 – this number was announced for the first time yesterday). “We must wipe out the deficit by 2015,” he added. “We are now at a fork in the road: either we cut spending and increase efficiency, or we continue raising taxes. I’m for the former!”

Dvorkovich suggested increasing entrepreneurial activity to close the budget gap. He then challenged Kudrin’s efforts to eliminate corporate tax breaks (which the Finance Minister estimated are costing the budget 5% of GDP) by calling this “an erroneous message.”

Sberbank President German Gref interrupted the theoretical debate on fiscal burdens with a reality check, bringing the focus back to the hike in social insurance contributions. “You can’t undress a naked person. Ransacking small businesses that create jobs and economic growth right now is impossible,” the former Minister of Economic Development and Trade said. Big business will feel the pain, too: “For Sberbank, a hike to 34% will eliminate the results obtained from two and a half years of efforts to improve business processes.” The President of Opora Russia, a small business lobby group, Sergey Borisov supported Gref wholeheartedly: “The increase comes as a shock for small businesses. Mass company closures and an exodus to the shadow economy are inevitable.”

Government officials tried to distance themselves from the unpopular tax measure. “This was a consolidated decision by the government, the president, and the parliament,” Kudrin said. As he sees it, “the weak state” had opted for the tax hike because it didn’t have the guts to implement structural measures, such as a reduction in early pensions and an increase in the retirement age. “The increase in social contributions, however, is instrumental to achieving a political objective (pension growth – Kommersant), which has been at the forefront for all political forces in this country, so this is not something the Ministry of Finance is responsible for, and I have already said who is,” Kudrin explained.

Later on at a press briefing, Kudrin made a point of stating that despite everything that had been said, Prime Minister Putin’s decision still had his full support. “I am for the increase in social contributions,” he said. Dvorkovich, as is the latest Kremlin fad, took the debate to cyberspace, peppering his Twitter account with aphorisms such as “We are not so rich as to be able to afford high taxes.” That said, President Dmitry Medvedev, who skipped the conference, has not twittered anything on the subject, and since Putin isn’t even on Twitter, the national argument over who is responsible for raising the uniform social tax and why, and what’s to be done with it, fizzled out that very day.