Russia to return to the 12-hour workday? 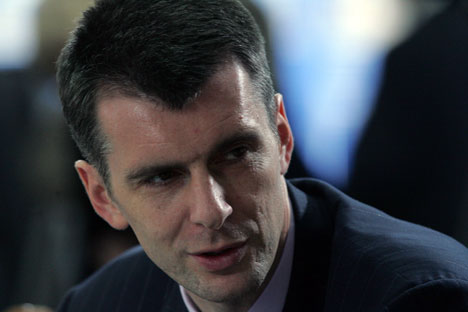 The Russian oligarch Mikhail Prokhorov (estimated by Forbes to be worth $13.4 billion) has proposed making major changes in the Russian Labor Code: increasing the work week from 40 hours to 60, replacing permanent contracts with fixed-term contracts, and giving employees not two months’ notice on termination, but one. In other words, Prokhorov would like to do everything to make the employer’s life easier: first squeeze all the juice out of workers by forcing them to work 12 hours a day, and then, when they’re no longer needed, give them their walking papers, but no severance pay.

No wonder Prokhorov’s proposal has met with fierce resistance. Trade union leaders and State Duma deputies have made it clear that they will not support it. Meanwhile, rank-and-file citizens have expressed their vehement displeasure in blogs where they curse Prokhorov as a “voracious bourgeois”.

The situation has become almost incendiary. In tsarist Russia, workers labored 15 hours a day. It took the Revolution of 1905 to reduce their workday by three hours. After the October Revolution of 1917, one of the first decrees by the new Soviet regime introduced the eight-hour work day.

Russia’s new billionaires must have been poor students of Russian history. And about the social gains made by workers in the West, they obviously have no knowledge at all. Nevertheless, let’s try to look at the situation through their eyes. Their main argument is that Russia is seriously behind developed countries in terms of labor productivity. This prevents Russian companies from being competitive on the world market. Labor productivity can be increased in various ways: for example, by buying new equipment and improving workers’ qualifications. But those measures require substantial financial investment. It costs far less to simply make the workday longer. But then where is the guarantee that workers, who have done a so-so job for eight hours, will do a better one for 12? It’s hard to imagine that those workers will show more enthusiasm.

Still, it’s worth noting that most of our oligarchs are genuine workaholics for whom a 12-hour workday is standard practice. Take the owner of a metallurgical concern who also happened to publish a daily paper. This metals tycoon-cum-newspaper-publisher was in the habit of calling his paper’s editor at 3 in the morning with the question: “Are you asleep?” The editor, woken out of a sound sleep, would of course say: “No.” “Well then let’s talk,” the publisher would say. “I’ve just gotten out of a meeting.” This man was also in the habit of making appointments with people for 10 and 11 at night.

On the other hand, Russia’s rich also know how to relax. Indeed, Prokhorov is known throughout Europe for his escapades at the luxury French resort in Courchevel. Other oligarchs have a passion for big game hunting, parachute jumping and downhill skiing. And since they’re their own boss, they can take a week off whenever they like, whenever they feel the need to kick back. If their workers could take it easy with top models at five-star ski resorts or hunt lions in the wilds of Africa several times a year, they too might resign themselves to a 60-hour work week. But at best these workers can hope for a “one-shot” vacation in a cheap Egyptian hotel. More likely, though, they’ll have to settle for a second shift at their own dacha (always in need of repair).

The standard of living among the “masters” is so different from that of their “servants” that it’s as though they live in parallel worlds. Last week Russia’s Auditing Chamber published various macroeconomic statistics for countries in the former Soviet Union. These included such interesting facts as the following: the top 10% of Russian citizens in terms of income are 17 times richer than the bottom 10%. In Europe this coefficient is 6-8 times. Even in the United States with more multimillionaires than anywhere else, the difference is 13-14 times. That means that in Russia the gap between rich and poor is enormous and continuing to grow. Even the financial crisis did nothing to lessen the gap: the rich became even richer, and the poor poorer. Small wonder that the attitude toward rich people in Russia remains essentially negative; initiatives like Prokhorov’s only add fuel to the fire.

Of course this attitude in Russia is nothing new. For centuries Russian culture espoused the view that, as two popular Russian sayings have it, “An honest day’s work won’t buy you stone palaces” and “money can’t buy happiness.” In Russian folktales, too, the hero’s main aim is never to become rich. If he happens to receive half a kingdom, then it is only as a reward for gallantry and devotion to family and country. In the Russian folk view, a person may come by riches in one of two ways — either by swindling and stealing, or by some miracle. Either way, riches are a trial and a heavy burden to bear.

Why this came about historically is hard to say today. Russian Orthodoxy, which considers spirituality the supreme value, may have played a part. It’s no accident that in Old Russia so-called holy fools were especially revered despite the fact that they never worked and lived off of charity; on the other hand, they spoke directly with the higher powers. The hard life of Russia’s peasants also left its mark on attitudes toward the rich. Because of the harsh climate, to become rich in Russia was a fairly difficult thing to do.

When the first exponents of the bourgeoisie appeared in Russia — Russian merchants — they too felt something akin to guilt for being rich. It was they who gave the most money to charity, not the noblemen. They even gave money for the Russian Revolution which ended by destroying them.

Today’s Russian “merchants” are better known for their drinking bouts and exotic expenditures (also very typical of wealthy Russians before the Revolution, who became famous for, among other things, bathing actresses in Champagne). They aren’t yet old enough for serious philanthropy.

As for Mikhail Prokhorov, sensing the general disapproval of his idea, he felt it necessary to justify himself. During a recent television appearance, he said that his detractors wanted there to be no rich people, whereas he wants there to be no poor people. I suppose there’s some logic in that: the more a person works, the less time he’ll have to shop and spend money. By the time he retires, he’ll have a tidy sum. Assuming he lives that long.