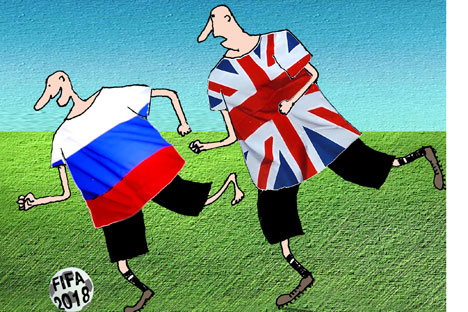 In early December, the 22-nation member Fifa Executive Committee will vote to choose two hosts for the 2018 and 2022 World Cup finals. As the bidders jostle for a shot at these goals, preliminary assessments of each were recently made public. And pulses are now racing in Russia after bookmakers made it the narrow favourite over main rival England in the 2018 contest.

There’s no mystery why this is the case. According to Fifa experts, Russia’s governmental guarantees of the event are rock-solid, while the only stated deficits are the transport and sports infrastructures. Overall, it was an “objective” assessment, Russia’s bidding committee responded. “We have made no secret of the fact that we do not have enough stadiums that meet Fifa’s requirements,” committee head Alexei Sorokin said. “The report reflects the state of the country today. But we have never said that we would be ready to hold the World Cup tomorrow.”

Russia has a clear-cut programme to develop its infrastructure, including in transport, and guarantees the resolution of existing problems in time for the 2018 finals. Mr Sorokin added that Fifa has been fully briefed on scheduled improvements that he believes make Russia a winner rather than a contender.

Since the vast territory and distances between Russian cities complicate plans to hold the World Cup here, allowances were made when putting the bid together: all of Russia’s candidate cities are located in the European part of the country, west of the Urals. There are no plans to send soccer players or their fans to Siberia.

Russia’s road network does leave much to be desired, and the government has pledged to improve it before the event, while developing other quicker and more comfortable options for conveying fans and tourists from one site to another. At the core of the bid will be the establishment of new express railway connections between cities. This is already happening, quite independently of the Cup bid, sport and transport chiefs remind us.

Today, rail travellers can cover the 435 miles between Moscow and St Petersburg in 3 hours and 40 minutes; you can visit the country’s third city, Nizhny Novgorod, from the capital in even less time, and work is underway to hook up Kazan and other cities to the express-service network.

Meanwhile, one of Russia’s largest airlines, Avianova, has announced plans to increase the number of flights to all cities where World Cup matches could be held, while keeping fares down to the bare minimum (from $10).

The carrier’s new managing director Andrew Pyne has publicly pledged to Fifa president Sepp Blatter that his company will offer unrivalled, regular and affordable access to fixtures for residents of Russia and World Cup guests.

“I’m an Englishman, but right now I’m rooting for Russia with all my heart,” Mr Pyne said of the bid.

The country’s sports infrastructure also raises questions at first glance. At present, Russia has only one stadium suitable for a World Cup match, namely the Luzhniki Stadium in Moscow, which was awarded elite status on the eve of the Champions League final in 2008. However, several new modern arenas are already under construction and will be opened ahead of 2018 for other scheduled sporting events. These days Russia is increasingly winning the right to host serious competitions that require a developed infrastructure.

In 2013, Kazan will host the Summer Universiade, and the city is now building dozens of new sites for this purpose. These include a 45,000-seat stadium that meets Fifa specifications, and which Prime minister Vladimir Putin described at a groundbreaking ceremony in May as “one more trump in our bid to host the 2018 World Cup.”

A similar situation exists in Sochi, which is now gearing up to host the 2014 Winter Olympics. The main stadium for the first-ever Russian winter games will be handed over to the national first division club Zhemchuzhina Sochi, now playing in the national first division. In 2018, this stadium could be at the disposal of World Cup players, while, because of the Olympics, the infrastructure of the city and entire region will be in great shape.

In St Petersburg, construction of the new Zenit stadium is in full swing and is due for completion in 2012 or earlier. This state-of-the-art football arena would qualify to host semifinal matches for the World Cup. In Saransk, authorities have announced plans to build a large modern football stadium, regardless of the World Cup. A similar situation exists in Krasnodar, where everything is ready for the construction of a new arena for the young and ambitious first division Krasnodar club.
Moscow, too, as the main city in Russia’s World Cup bid, is working to keep up. Already the capital plays host to major athletics meetings. In 2008, it was the Champions League final, before that the Uefa Cup Final, while in 2013 Moscow will host the World Athletics Championships. The city’s soccer clubs are hatching collective plans to build new stadiums, led by Spartak, which is now finalising the project for a 45,000-seat arena on Khodynsky Field. Moscow Dinamo began major reconstruction of its stadium in late 2008 and work should be finished by 2016. These sites have also been included in Russia’s World Cup bid – and will be built in any case.

That’s the key phrase: will be built in any case. Whether Russia wins the race to host the 2018 Fifa World Cup or not, it will soon boast at least seven new, ultra-modern stadiums, new intercity express rail and air routes. And with momentum like that, there is very little holding Russia back in next month’s selection.