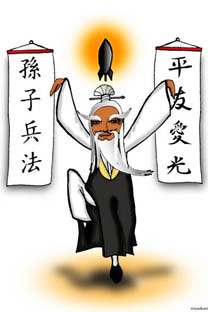 It has been all the buzz between the October East Asian summit in Hanoi and the recent Obama trip to the region: China is no more the gentle giant. The sweet mandarin warble of “mulin, anlin, fulin” -which could be translated as “be friendly, make them feel secure and help make them rich”- has been replaced by the bellicose growling of a regional bully.

Currency and trade feuds, incidents and tensions in the East and South China Sea, aggressive naval expansion in resource rich waters, all this is seriously unnerving Beijing’s neighbors. Less known, but maybe worse: there is some boot stomping at both ends of the Himalayan border with India. Beijing is deploying new troops and building military infrastructure in this contested area.

Some think that China is getting drunk on its new great power status. Others say that Beijing merely compensates for emerging weaknesses at home with nationalist posturing in the neighborhood. There is talk of a possible “new cold war” and one hears various arguments for a decisive American reengagement in the region –some polite and cautious, some rather more strident and threatening.

Remember the neoconservatives’ “moral clarity”? It was the rationale for their aggressive foreign policy under Bush’s presidency. Of course, the whole high-minded purpose drowned in a venomous cocktail of imaginary weapons of mass destruction, extraordinary rendition and waterboarding. In the end, the prophets of regime change presided over a steep decline of international credibility for the US.

Clarity –moral or otherwise– is not what characterizes the new Asian Great Game. Nine years into the Afghan campaign, writes defense analyst Michael O’Hanlon, Washington “still can't clearly answer the question of whether Pakistan is with us or against us.” In a recent op-ed, Admiral Fasih Bokhari, former Pakistani Chief of Naval Staff, inveighed against NATO “destabilization” of his country and, at the turn of an ill-constructed paragraph, inadvertently ranked the US amongst “our foes”. A few days ago, when it turned out that a top Taliban commander with whom Afghan and NATO officials had been negotiating for months was an impostor, many saw the Machiavellian hand of the infamous Pakistani intelligence service. The only certainty about Pakistan is that Islamabad both needs America’s money and China’s regional clout.

At the other end of the Indian Ocean, Indonesia was insistently wooed by Obama during his visit. But Jakarta is dealing very cautiously with its Chinese and American suitors. “We can navigate between that rivalry, from time to time giving out signals that both the United States and China are important to us,” says former defense minister Juwono Sudarsono. “If we align ourselves too closely, it would be detrimental to the core values of Indonesia’s foreign policy.” It’s not the same kind of ambivalence as Islamabad’s, but it’s very far from a cold war type alignment.

As for India, it’s certainly nervous about Beijing’s surge of arrogance and strong-arm tactics. That doesn’t mean that it will just become America’s “most strategic and organic Third World ally”, in the very anachronistic definition of conservative analyst Charles Krauthammer. New Delhi’s position on such a crucial issue as Iran, for instance, radically diverges from Washington’s.

Indian Foreign Secretary Nirupama Rao recently stated from Beijing that though her country might have some disagreements with the Chinese, “we can talk to each other frankly as friends and look at the issues that remain to be resolved.” “The relationship between India and China is going to be the most important relationship in the 21st century,” she added. Chinese premier Wen Jiabao is to visit New Delhi in the middle of December. It will be a good opportunity to gauge the degree of purported frankness and friendliness.

Ambiguity is the name of the game in the new Asia. If there is a Cold War in the making, it’s definitely not your daddy’s Cold War. Bad news for those who pine for a “with-us-or-against-us” world order. Not necessarily good news for the present US administration.
Navigating the troubled Asian waters will require superhuman subtlety and tactical skills from the American president. Being diplomatically subtle won’t be easy with a new legislature partly controlled by unforgiving adversaries. Some Republican policymakers feel a phantom pain from the lost of the good old Evil Empire. The GOP as a whole will suffer the pressure from a dangerous and ignorant rightwing populist movement. Not a recipe for cautious strategic thinking.

All this is more than slightly worrying, as the present Korean crisis illustrates. But at least it won’t be boring. There will be a lot of complex poker moves and plenty of opportunity for virtuoso second-guessing. It might also call to mind the purportedly Chinese saying about the curse of living in interesting times. Linguists and historians say there’s no certifiable source for this adage, and no one knows if it’s really Chinese. Which is somehow fitting, because who knows what the Chinese really think?

Marc Saint-Upéry is a French journalist and political analyst living in Ecuador since 1998. He writes about political philosophy, international relations and development issues for various French and Latin American publications and in the international magazines Le Monde Diplomatique and Nueva Sociedad.