Russia headed to WTO via Europe 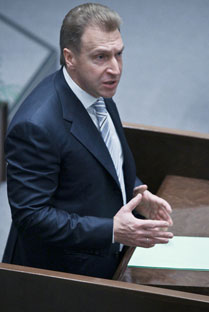 The European Union has agreed upon terms for Russia’s accession to the World Trade Organization (WTO). The Russian government hopes to complete the integration in 2011. Experts are advising Russia to hurry up, as the 2012 presidential elections in the United States could return the 17-year long negotiation process to square one.

After a meeting with senior EU officials in Brussels, First Deputy Prime Minister Igor Shuvalov announced that disagreements with the EU over Russia’s entry into the WTO have been resolved. He estimated that the integration process would take around a year.

All disputed issues in the Moscow–Brussels negotiation process were resolved on Nov. 24, Shuvalov said after a meeting with EU representatives. Participants from the European side included José Manuel Barroso, the president of the European Commission; Catherine Ashton, the High Representative of the European Union for Foreign Affairs and Security Policy; and EU Trade Commissioner Karel De Gucht.

“We have resolved all of the issues, and Russia now faces no obstacles to being admitted to the WTO,” Shuvalov said, adding that the agreements reached with the EU also take into account U.S. interests. In particular, an agreement on the gradual reduction of Russia’s export duties was reached.

Now, however, the positions of Russia and the EU have moved closer together and, according to a source in Shuvalov’s office, “only technical and legal issues remain unresolved.”

The chief disagreement between Russia and the EU has revolved around the size of the export duty on timber. Russia had planned to raise the duty on raw timber as of 2010 to a practically prohibitive level, from €15 to €50 per cubic meter, but the hike was delayed for a year because of the economic crisis.

Eurozone members Finland and Sweden, whose industries are heavily dependent on Russian timber supplies, asked Russia not to raise the duty. Russian Minister of Economic Development Elvira Nabiullina responded by promising to extend the moratorium for another year, until Jan. 1, 2012. A definitive compromise is yet to be found.

Apart from EU members’ grievances, Russia has disagreements over the size of agricultural subsidies with the so-called Cairns group of 19 of the world’s leading food exporters, including New Zealand, Australia, Canada, and several Latin American nations.

Minister of Agriculture Yelena Skrynnik has made Russia’s position known on this matter. According to her calculations, the level of state aid to agriculture will remain unchanged at $9 billion annually until 2012. From 2013 through 2017, the subsidies will be reduced to $4.4 billion a year. The Cairns group insists on much smaller caps of $2–3 billion each year.

“It is necessary to reach agreements first with those Cairns countries that have zero agroindustrial subsidies. Then the rest will not feel so bad about it,” said Alexei Portansky, head of the Information Bureau for Russia’s Accession to the WTO.

Finally, Russia has not yet obtained a definitive go-ahead from Georgia. WTO regulations mandate that each candidate must secure entry approvals from all members of the organization. Georgia has complained of Russian-imposed trade sanctions and says that trade is paralyzed in a part of its territory that is “occupied” by Russia. But according to Maksim Medvedkov, head of the Ministry of Economic Development’s Department for Trade Negotiations, there is room for negotiation because “Georgia’s grievances are political, while the WTO is not a political organization.”

“The key WTO players, the EU and the United States, have the political will to accept Russia at the moment. The outcome of the 2012 U.S. presidential elections is far from clear. There is a risk that the perennial WTO negotiation process will need to be started again from scratch,” said Lisovolik.

Russia has already resolved disagreements with the United States on access to the public procurement market, the unification procedure for phytosanitary and veterinary controls, and a number of other issues. The Kremlin and the White House are now confident that Russia will join the WTO in 2011.

“While such a possibility indeed does exist, no one will be able to tell you the actual accession date. Russia and the United States first agreed on that back in 2006,” said Portansky.

Yet another “technical issue” relates to the Report of the Working Party on the Accession of the Russian Federation to the WTO, which will need to be substantially amended.

This document reflects Russian Prime Minister Vladimir Putin’s intention to conduct the accession process together with the two other members of the Customs Union, Belarus and Kazakhstan. President Dmitry Medvedev has since revised this stance. It was decided eventually that each of these countries would join the WTO separately, but on equal terms for access of goods and services to the Customs Union’s Common Economic Space. Updating the Report with all the necessary amendments could take several more months.