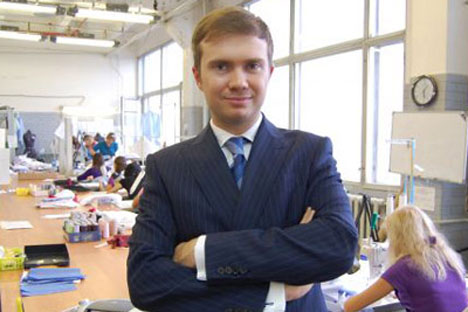 Izhevsk, an industrialized city of some 600,000 in the Ural Mountains, is known for its designs, from the first Russian motorcycle in 1929 to the world-famous Kalashnikov rifle nearly two decades later.

Now a local entrepreneur is calling on customers to produce their own designs — for custom-tailored dress shirts.

Vasily Muntyan, 28, said he picked up the idea while traveling abroad, though his own problems finding a decent shirt back home were what convinced to him to launch Rubashka-na-Zakaz, or Custom-Made Shirt.

“Although none of us had any Internet experience, we decided to set up an online business,” he told The Moscow Times.

The venture cost $500,000 to launch, with the funding coming from Muntyan's father, Andrei, an executive at local lender Mobilbank.

“He takes part in all of the brainstorming,” Muntyan said, adding that his family's business connections had helped avoid red tape that can slow down Russian startups. Since he started the company in February 2009, it has sewn about 11,000 shirts at a rate of 15 to 30 orders per day. Sales have reached an annual $400,000, and delivery is available worldwide, he said.

Regular shirts cost up to $70, but “test shirts” made from cheap Russian fabric are available for 300 rubles ($10) — as are more expensive handmade designs.

The company is already operating at a profit, and Muntyan expects to recoup the initial investment by early 2012. Labor in Izhevsk, the capital of Udmurtia, is cheaper than in Moscow, though costs are driven up by the need to import fabrics from European countries and Malaysia, he said.

Most of the company's 40 employees are directly involved in production at a rented 200-square-meter factory in Izhevsk.

In its advertisements, the company calls on clients to “use imagination” while designing their shirts, and so far, the results have been encouraging. A regional student comedy team purchased several flashy shirts for their performances, Muntyan said. Television actors and even a few local bureaucrats have also placed orders.

But Muntyan hasn't been shy about capitalizing on Izhevsk's current claim to fame, either. His company's web site features a photo of rifle designer Mikhail Kalashnikov, who turned 91 earlier this month, sporting one of his shirts with light-blue stripes. “We wanted to remind people about our city's most famous person and give him a shirt,” Muntyan said.

Most clients are Muscovites, though residents of other regions also make use of the service. A few orders placed on the site, which has an English-language version, came from the United States and China.

“The only thing that bothered me was that the delivery wasn't a door-to-door service. I need to pick up the parcel from the local postal office,” a Chinese client, Zhai Linjing, wrote on the company's site in October.

Most clients are men aged 25 to 40, although shirts for women are also available. Customers come from vastly different financial backgrounds, Muntyan said.

“Some people order up to 10 shirts, while for some, paying just 300 rubles is too much,” Muntyan said. A regular client once purchased five handmade dress shirts costing a total of more than $1,000.

The business caters to people who don't like the cost or selection in retail shops.

Anton Bugayev, a 32-year-old lawyer from Bashkortostan who described himself as a “fan of quality shirts” on the company's site, said he decided to order a shirt online after having problems finding one in the republic's capital, Ufa.

“Quality shirts cost up to $300, and they are often hard to find,” Bugayev, who ordered a white shirt for $30, told The Moscow Times by telephone.

Most customers are praising the idea and the site's design, though several have also complained about the limited variety of fabrics and delayed orders.

It takes a week to ship out a custom-made shirt, Muntyan said. But about 40 percent of clients prefer to pay on delivery, not by credit card, which forces the company to send goods via the notoriously slow Russian Post.

“Russian Post is still the cheapest way to ship orders, but it is slow and this is one of the biggest minuses for us,” he said.

Only 24 percent of Russians make online purchases at least once a month, according to a January survey by the ROMIR polling agency. But the number of Internet users in the country is growing steadily, expanding the potential client base for Rubashka-na-Zakaz.

Competition, however, is also on the rise. The Moscow-based Legole offers a similar service, although it only produces 100 percent cotton shirts and does not use synthetic blends like Muntyan's enterprise.

Meanwhile, Muntyan said he is planning to expand its offerings. The company has started to make ties and skirts, and designing your own pants online will also be available in the near future, he said.