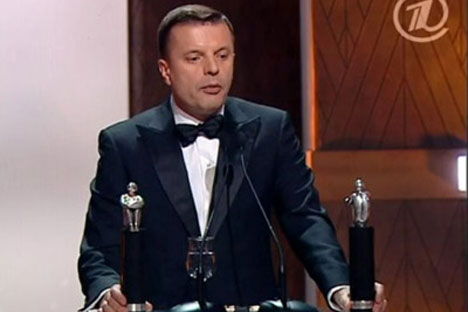 A screen grab from Channel One of Parfyonov accepting theListyev prize

Leonid Parfyonov, a former editor-in-chief of Russian Newsweek and television host with a slew of successful projects — most of them nonpolitical — gave the speech Thursday evening while accepting the inaugural Vladislav Listyev Prize, presented to people responsible for “the event of the year” on Russian television.

Over the past decade “national television information services have become part of the government. Journalistic topics, like all life, have been irrevocably divided into those that can be shown on TV and those that cannot. … This isn't information anymore, this is PR or anti-PR by the authorities,” he said in a speech that was not broadcast by state-run Channel One, which gave the award.

“For a federal channel reporter, top authorities aren't newsmakers, they are his boss's bosses. But then … a reporter is not a journalist, but an official,” he said in a prepared speech that he read out after accepting the award.

Listyev, the founding father of post-Soviet television, was shot dead by an unidentified assailant in 1995.

“It's as if the authorities were someone who recently died — and you never speak ill of the dead,” Parfyonov said, adding that state-controlled television was resorting to Soviet-style propaganda tricks, such as showing protocol reports instead of real news.

“I don't have the right to fault any of my colleagues, I'm no fighter myself and expect no heroics from others. But at the very least we have to say it like it is," said Parfyonov, 50, who was fired from NTV in 2004, several years after it was taken over by state-run Gazprom, prompting a radical pro-Kremlin change of the channel's stance.

Parfyonov also drew attention to this month's beating of Kommersant reporter Oleg Kashin, whom he said he had visited in the hospital earlier that day. Reporters face violence in Russia "not because of what [they] write, say or film, but because it is read, heard or seen," he said.

The ceremony was attended by Russian television's most prominent figures, including the directors of leading federal broadcasters Channel One and Russia One. Most of them listened to the speech stone-faced, and applause was timid after Parfyonov thanked his audience.

Channel One covered the ceremony, but political remarks from Parfyonov's five-minute acceptance speech were not shown on television. The station posted a full, 30-minute recording of the ceremony, including Parfyonov's main speech from around the 25th minute.

The speech sent ripples through the media, with prominent blogger Anton Krasovsky calling it “a perestroika manifesto” in an interview to GQ magazine.

It remained unclear whether the critical speech was approved by television bosses or the Kremlin — none of whom commented on it — or whether it was an isolated act of rebellion by Parfyonov, who noted in the speech that he had worked at the state's Ostankino television tower for 24 years.

The Moscow Times was unable to reach Parfyonov for comment Friday and Saturday.

On Saturday, the Moskovsky Komsomolets daily cited Parfyonov's wife, Yelena Chekalova, as saying she thought that her husband might lose his most recent show at Channel One after years of being kept away from television.

But Chekalova later said she was misquoted, and the daily's television critic, Alexander Melman, admitted that the newspaper published an unedited version of her interview on its web site, Ekho Moskvy reported Saturday.

Parfyonov, who enjoys the respect of the country's journalistic community, was supported by many liberal-leaning professionals, including Vladimir Pozner, who hosts a show on Channel One.

But Pozner said Parfyonov's speech was directed at state officials, not television bosses who “simply follow certain instructions by authorities.”

“He thought about the contents of this speech for a long time, and it was his own personal act,” Anna Kachkayeva, a television analyst with Radio Liberty, told The Moscow Times. She said she believed that Konstantin Ernst, the Kremlin-connected Channel One director, was “unprepared” for Parfyonov's speech.

Parfyonov and Ernst are friends, and Parfyonov has made three nonpolitical documentaries for Channel One as a freelance producer in the last two years.

But Alexei Mukhin, head of the Center for Political Information, a think tank, said he thought that Ernst probably read Parfyonov's speech ahead of the ceremony and that his statements were likely sanctioned by the Kremlin.

Without challenging Parfyonov's liberal views, Mukhin called him “a good nonconformist who was used for concrete goals. He caught the fresh wind coming from the Kremlin,” he said.

Parfyonov cited the uproar that the broadcast caused as evidence that Russians want more diverse views on television.

“After stagnation comes perestroika, and this is an indication that perestroika has begun,” Belkovsky said. The speech was allowed because Ernst, like most Kremlin-savvy television bosses, “sees the changes in the atmosphere,” he said.