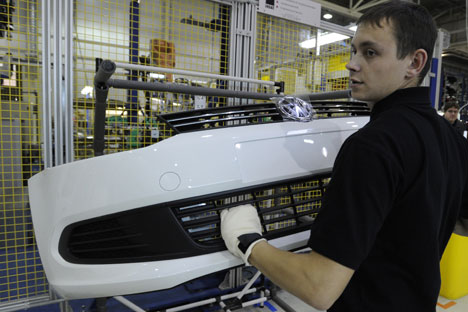 Canadian auto parts maker Magna opened a new plant in Kaluga on October 28, which the company said demonstrated its belief in the strong potential of Russia’s car market.

The facility will manufacture bumpers and front-end modules and will assemble radiator grills and instrument-panel beams.

The company said it was against corporate policy to disclose the volume of investment in the project.

Kaluga lies 116 miles southwest of Moscow. Although the company already has plants in St Petersburg and Nizhny Novgorod, Magna chose the town for the new factory because its major customers – the world’s biggest carmakers – are located in the region, according to Hubert Hoedl, Magna’s vice president for corporate marketing and business development in Europe.

Among the carmakers that the plant will supply are Volkswagen, Skoda, Renault and Peugeot Citro ë n.

The plant, currently operating at 25pc of capacity, is making bumpers for three car models – Volkswagen’s Polo and Skoda’s Octavia and Fabia. However, the chief executive, Georgy Rotov, said they expect to reach full capacity of 150,000 to 170,000 auto component kits per year by 2012.

The plant will also start supplying auto parts for the new Volkswagen Tiguan and Renault Duster next year, he told reporters, adding that Magna also has orders from Peugeot and Citro ë n, and is in talks with Mitsubishi.

Manfred Eibeck, president of Magna Russia, said at the opening ceremony that the plant was “a clear indication of our belief in the Russian automotive market, and its prospects for future development and sustainable growth”.

Mr Artamonov said he hoped that Magna’s enterprise would contribute to “creating a fully fledged automotive cluster” in the region.

Ending the ceremony, Mr Artamonov and the Magna executives signed the first Volkswagen bumper to be produced at the plant – that was later presented to the carmaker.

After having a careful look at the bumper, Dietmar  Korzekwa, chief executive of Volkswagen Russia, proclaimed that its quality was “very good”, and expressed the hope that the components supplied by Magna would be of the same quality in the future.

“As original equipment manufacturers focus on global expansion, the expectation is that their global suppliers are positioned to support them in all regions of the world,” he said in a statement.

Mr Hoedl said Russia’s automotive market was “catching up very fast”, and the company believed that the trend would continue in the coming years.

PricewaterhouseCoopers said that car assembly in Russia would recover to the pre-crisis level next year and reach 1.7 million vehicles.

Mr Wolf will be appointed board chairman at Russian Machines – Basic Element’s manufacturing division, and the controlling shareholder in carmaker GAZ Group – where he will be in charge of strategic business development.

Speaking in an interview with the Moscow Times after the opening ceremony, Mr Wolf said: “After 16 years of successful work with Magna, you can believe it was not an easy step for me… It was a great time.” He also said that it was “an ideal time” to move because of Russia’s stable economic growth and “strong political leadership”.

Mr Wolf said he expects to bring his experience to GAZ, stressing that he hopes to “build up a very competitive company” in co-operation with Mr Deripaska.

“That’s what we are working on already,” he added.