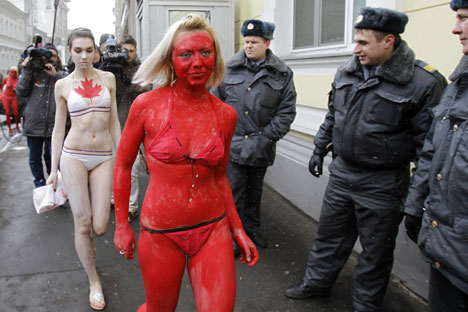 Nikolai Alexeyev, a leader of Russia’s Gay Pride movement, came directly from court following his arrest for staging an illegal rally in central Moscow. “I don’t want to wait any more for my freedoms or civil rights as a gay man,” he said, relaxing in a café after his court appearance, a familiar routine for someone who has been arrested 11 times.

Speaking shortly after the October sacking of Moscow mayor Yury Luzhkov by President Dmitry Medvedev, he paused in mid-interview to answer his phone. “Historic news,” Mr Alexeyev exclaimed. “The municipal court in St Petersburg just ruled to overturn a ban on the Gay Pride march planned for July. It is the first time gays can demonstrate legally in Russia.”

A tide of special interest protest groups has become more visible over the last two years. Since Mr Luzhkov’s ousting , the Kremlin has softened its stance on public protests, and Russia’s political activists hope to take advantage of this. These activists range from unhappy drivers and pensioners to environmentalists, preservationists and disenchanted liberals. Some say they are hopelessly dispersed, others sense a civil society moment coming on.

A week after the Gay Pride march was sanctioned, the Strategy-31 movement, which demonstrates for the right to demonstrate, a right enshrined in Article 31 of the constitution, was given permission to hold its first sanctioned event in Moscow.

Russia’s political leadership now seems to be searching for that elusive balance between promoting civil society and concerns about emboldening the opposition.

The danger for the Kremlin is getting the mix wrong. A small incident, the withdrawal of Russian pensioners’ bus passes in 2005, snowballed into a potent popular protest against then president Vladimir Putin. The passes – and order – were restored. But others are not so easily reconciled. Sitting at a chipped table outside a Moscow subway station is Boris Nemtsov, one-time deputy head of government under Boris Yeltsin and fabled reformer in the Nineties. Now an opposition gadfly, he is here to sign copies of his scathing report, Ten Years of Putin , and a queue quickly forms. “This is the biggest opposition project in 10 years,” said Mr Nemtsov, who has distributed 100,000 copies of the book. Containing chapters such as “Corruption is Devouring Russia”, he describes it as “modern samizdat”, the underground publishing of the Soviet-era.

While Mr Alexeyev believes the internet will become a major force for change in the country, Mr Nemtsov is more sceptical. But both men agree that despite the protests, the state retains control over Moscow. And with far higher income levels here than in the rest of Russia, Muscovites are the least likely to rebel.

Some analysts suggest that the rise in activism stems from the explosive economic growth of the last decade that has improved the overall standard of living. This is coupled with the fact that the state did little in the way of specific reforms aimed at improving public services. And the population, especially a rising middle class, now expects more. The drudgery of surviving in the Nineties has given way to concerns over career, education, property values and retirement.

Where will these movements go from here? No one knows. But the Russian internet is exploding with discussion and the Kremlin has already been forced to respond to some online campaigns. Notably it even initiated an internet debate over the police law. Pundits say the 2012 presidential election season could be the ultimate test of the new-found tolerance of dissent.