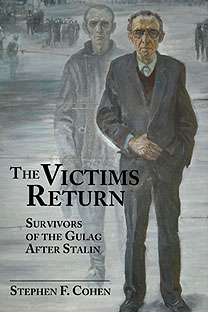 The recent shifts in attitudes towards Stalinist repression have an unnerving quality – first a swing towards exposing and condemning, then a swing back towards forgiving and forgetting. The Russian government has been sending out conflicting signals: “Let’s focus on the achievements, look at the positive side and stop fretting over atrocities that we can’t change now.” Or, on other occasions, “No achievement is worth the cost of human repression on this scale.”

What remains unanswered as this dysfunctional to-ing and fro-ing goes on at the top is why millions of ordinary Russians who lost family and friends in the Stalinist repression still find it so difficult to face and acknowledge the atrocities of the past – some in the personal dimension, others in their grim entirety, still others in both.

A large part of the answer may lie in The Victims Return, a new book by New York-based historian Stephen Cohen, a long-time analyst of Soviet history best known for his biography of Nikolai Bukharin. Cohen’s volume is the result of years spent in the Soviet Union and post-Soviet Russia interviewing scores of former Gulag victims.

Readers familiar with the spate of new books on Stalinism (by Orlando Figes and others) shouldn’t rush to categorize this one among them. Cohen has gone beyond the purges themselves to look at what happened when millions of the victims returned to join the ranks of Soviet society in a giant influx during the 1950s and 1960s.

While much has been written of the Great Terror and the millions who were tortured, executed or sent to the Gulag, little is known about how their experiences shaped their post-Stalin lives, and how they adapted and re-integrated into society.

The late Alexander Solzhenitsyn spent much of his life as a dissident exposing the Gulag for what it was – in its time and place. Cohen demonstrates that the extended reactions of these millions are as varied as human existence itself.

While many internalized the Gulag experience – repressing themselves, in effect – many others rejoined the ranks of the Communist Party. And a good number in fact refused to condemn Stalin, despite seeing relatives die at the hands of his executioners.

It is unsettling to read, for instance, how Marshal Rokossovsky, “who had eight teeth knocked out by the NKVD in 1937, was said to have refused to participate in Khrushchev’s anti-Stalin campaign because ‘for me, Comrade Stalin is sacred’.” Or that after spending 21 years in the Gulag, writer Galina Serebryakova rejoined the Communist Party, thanking it for “my second birth, my return to this world from the abyss.”

Among those who did not re-assimilate, remaining pariahs forever to both the regime that destroyed their lives and its successors, many found it hard to forgive other Gulag victims – despite their bond of common experience – for currying favor with Soviet officialdom.

Attitudes to Stalin and his purges remain a major problem in adequately assessing and coming to terms with Russia’s past. One question that keeps being raised is why – despite a period of exposing and condemning Stalin’s crimes in the years after perestroika – Russian society continues to accept Stalin in a way that is unthinkable, for instance, in Germany with Hitler.

The Victims Return sheds light on the mundane, incomplete healing process, if it can be called such, for millions of the victims – on the committees that traveled to the Gulag freeing prisoners, on the mountains of paperwork involved in rehabilitation, and so on.

It even notes, quite tellingly, how some people refused to leave the camps once they became relatively more hospitable following Stalin’s death.

In the process, the book illustrates how a large part of the population learned to live with their scars, which goes some way toward explaining why so many are reluctant to open those wounds again.

The sheer horror of its subject matter ensures that this volume is no easy read, but Cohen effectively treats a reality that is monstrous, and without deflating it, by offering his account in a simple, transparent prose that readers will find engaging – and should not estrange those without a deep knowledge of Russian history.

All told, The Victims Return should be read by anyone who seeks a better understanding of key social issues and a national psychology that have defined Russia’s recent past, because they continue to define it today.