To START or not to START 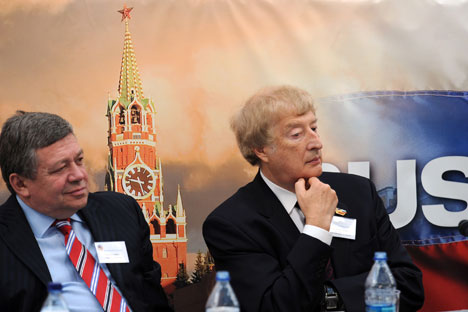 The most impressive victory of the Republican Party in the last U.S. elections sent shivers not only through the White House and Democratic Party headquarters but through Moscow’s political establishment as well. Here, the fear is that the new Congress could try to undermine Obama's reset policy with Russia.

But although Obama undoubtedly comes out of this election severely weakened domestically, he is still pretty much in charge of U.S. foreign policy. Can he make some headway in this area to help the country and himself in view of the upcoming presidential campaign?

It will of course not be an easy task, given that the United States, which only 20 years ago was the world’s only and undisputed superpower, has suddenly found itself in a very precarious geopolitical, economic and financial situation. Now, the story of U.S. difficulties can be recycled endlessly and fingers pointed at those who are to blame for the current sad state of affairs. However, discussing the things that need to be done seems a much more meaningful pursuit.

As far as U.S.-Russian relations are concerned, one piece of advice coming from the Cold War school is to follow the Clinton-Bush strategy, or perhaps an even more extreme one: Isolating and weakening Russia through NATO expansion, building oil and gas pipelines bypassing Russia, exerting pressure on Old Europe for being too soft on Russia while encouraging New Europe to be even tougher. Other aspects of this strategy include sponsoring “color revolutions” along Russia’s perimeter under the guise of promoting freedom and democracy while at the same time building economic and political-military alliances with even the most dictatorial regimes in the post-Soviet space.

In short, advocates of such a policy demand that Russia be seen as a clone of the Soviet Union. For champions of this approach, a slightly modified containment policy as well as continued ideological warfare under the neutral term of “public diplomacy” are logical and highly desirable.

Among this policy’s immediate goals are derailing the START treaty, building pipelines with little economic sense to transport the Caspian energy flow to Europe bypassing Russia, resisting Russia’s efforts to integrate into the European security architecture, bashing Russia for its poor human rights record, and so on and so forth. All this is presented as the best policy, putting America’s interests first. However, this approach appears highly dubious and even suspect on at least two counts.

First, with astronomical national debt, close to 10 percent unemployment, two endless and intractable wars, the rise of militant Islam, and myriad other problems, can the United States afford another Cold War and continue to claim to be the world’s policeman?

Second, even if the United States can still afford it, is it in the Americans’ best interest to add Russia to the already long list of enemies instead of luring it to the other side of the barricades, just as Old Europe is trying to do with some success? Instead of barking at Europeans for their willingness to engage Russia, obviously the biggest, most populous and arguably most powerful country in Europe, shouldn’t America join the process?

NATO Secretary General Anders Fogh Rasmussen is certainly not a paid Kremlin propagandist, but on the eve of last month’s NATO-Russia summit, he said that NATO sees Russia as a strategic partner and seeks to cooperate with it. And his words were linked to real deeds, like providing NATO supply routes to Afghanistan, helicopters military personnel training, participating in joint military operations there, moving closer to U.S. positions on Iran, on nuclear non-proliferation, and many other security issues.

Those who disagree with Obama's reset policy should be advised that it is not a betrayal of U.S. national interests, as some of Cold War warriors are saying, nor is it an act of charity for Russia's benefit. It is essential to the security of the United States itself.

As for East Europeans who do not like the United States’ Russia rapprochement, it is time to tell them that they should stop crying wolf and begging for protection from the Russian bear. Instead, they should build strong trade and economic links with their powerful neighbor.

There have been some positive shifts in this area, as Poland and Ukraine have elected leaders that represent a drastic departure from old confrontational policies. Even in the Baltic countries there is a tendency to realize that normal relations with Russia are better for their economy and security than continuous appeals to Washington for more armaments and funds.

The main theme of the reset policy is simple, commonsensical and probably effective: cooperation is better than confrontation, compromises have to be worked out whenever there is a difference in interests, and overall security is paramount. Naturally, these goals are not easy to achieve; they will require a sustained effort by politicians on both sides of the Atlantic.

The first test for Obama’s post-election situation is quickly approaching.The Senate, which now makes Obama something of a lame duck, has to vote on the ratification of the New START treaty very soon. Moscow is pretty nervous on this score. Konstantin Kosachev, chairman of the foreign relations committee in the State Duma has said his committee would withdraw its recommendation that the Duma ratify New START until they are sure that the U.S. Senate is prepared to ratify it as well.

Should the Senate vote “yes,” it might be a good push to build up new momentum for the reset agenda. Should it vote “no,” we might as well get ready for a big chill in U.S.-Russian relations, which is bad for both countries and for mankind.

The old Cold War thinking leads to defense expenditures we cannot afford and which ultimately make the U.S. weaker. Both parties say that they want to reduce spending, and the major area for that is defense budget. New START helps lower the deficit without weakening national security. In fact, it benefits national security by reducing the total number of nuclear arms in the world and by encouraging other nuclear nations to reduce their stockpiles. New START has been endorsed by practically all living former U.S. Secretaries of State and Defense, who naturally see the importance of the treaty.

If we could only rid ourselves of the memories of the Cold War!