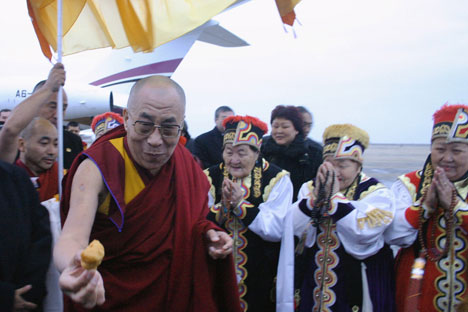 Over 1000 Russian Buddhists and, hundreds of Tibetans and visiting tourists packed the Tsuglagkhang Temple (Dharamsala, India) to listen to the teachings of the Dalai Lama on Gyalsey Thokme Sangpo's "37 Practices of A Boddhisattva" (laklen sodunma) from November 30 to December 2, Phayul.com reports. Along with the teachings, the Dalai Lama will also confer a Guhyasamaja Initiation.

The teaching has been specially considered by the Dalai Lama for the Buddhists from Russia and the Russian Republics of Buryatia, Kalmykia and Tuva along with a small group of followers from Mongolia. The former prime minister of Kalmyk Republic, three members of Russian Parliament (Duma) and the finance minister and other dignitaries from Kazakhstan are also attending the teachings.

The Dalai Lama is revered by the Mongolian and Russian Buddhists as their spiritual leader and they continue to seek His Holiness’ blessing and guidance for the full revival of Buddhism in their regions after undergoing decades of severe repression from Communist rule.

"There has been a growing interest to learn and understand Buddhism in the three Buddhists Republics and also in the rest of mainland Russia," Telo Rinpoche, the spiritual head of Kalmyk Buddhists and the man responsible for organising the teachings, told Phayul.com.

"So compared to last year's teachings, when we have around 800 attendees, this time we have around 1035 people coming from Russia. Also this times there are more youngsters joining their family to hear teachings from His Holiness," he added. "We have also seen more and more people from Russia coming to India every year to visit the holy Buddhist places and also to learn Buddhism."

Telo also said many of the Buddhist faithful attending the teachings have plans to stay little longer in Dharamsala, the exile home of Dalai Lama and the seat of Tibetan Government-in-Exile, or spend more time in India visiting other holy Buddhist places.

According to Phayul.com, here is also a strong media delegation of 27 journalists from different Russian news media currently in Dharamsala, the seat of Tibet's government in exile in north India. While in the town, they will explore the situation of the exile Tibetan community that includes interviews with His Holiness the Dalai Lama, the Tibetan prime minister and senior officials, and various other representatives from the community.

The world may see a second Dalai Lama