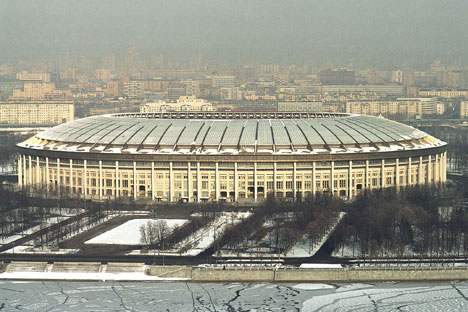 Moscow's Luzhniki Stadium is currently theonly one in Russia that meets all internationalcriteriaSource: Itar-Tass

“Roads, bridges, rail, airports, ports and sports facilities will all be brought up to world-class standards. This will increase substantially productivity, employment and elevate trend growth. Historically, large infrastructure spending has tended to add a 1-2% non-cyclical layer to trend growth. On the back of this and high commodity prices, Russia can re-join the club of the high-growth countries in the world,” says Plamen Monovski, the chief investment office of Renaissance Asset Managers which runs a big Russian fund focusing on infrastructure.

With its successful 2018 World Cup bid Russia has now scored a hat-trick of big sporting events having already bagged the 2014 Winter Olympics a Formula 1 Grand Prix in the same year.

Hosting the most-watched competition in the world will not just be fun, but will bring Russia serious economic benefits, despite the tens of billions the Kremlin will have to invest into bring infrastructure up to international standard. The first is the 13 cities in four regional clusters will all get massive injections of investment to upgrade transport and tourism facilities, as well as the construction of 15 world-class stadiums that will give the flagging real estate sector a shot in the arm.
Chris Weafer, chief strategist at Uralsib, says: "No doubt about it, while the cost could likely run into the tens of billions, World Cup 2018 would inject a great deal more urgency - and a stricter time line - into the government's modernisation programme."

But most important is the Kremlin will have to stick to the strict quality standards and deadlines set by FIFA.

Former Russian football coach Guus Hiddink said on the sidelines of the FIFA meeting where the result was announced: “I know something of the Russian soul and now Russia is under pressure and has an obligation to go on. Now they will have to talk less and work more.”

Work on upgrading Russia’s crumbling Soviet-era infrastructure has already begun, but the World Cup bid has already imposed a timetable that Russia will have to stick to. Of the 13 host cities, six are to be connected by a high-speed railway (the Sapsan, Russia’s answer to the bullet train) to the Moscow-St Petersburg and Moscow-Nizhny Novgorod lines that opened earlier this year. A link to the Black Sea resort Sochi will be launched by 2013, while Russia’s Baltic enclave Kaliningrad will be connected by 2016.

Russia’s motorway network will also be upgraded, however, most of the visitors are expected to travel by air, due to the vastness of the country. The Kremlin has already committed itself to doubling airport capacity in Moscow and St Petersburg by 2015, and tripling it for Yekaterinburg by 2012 with similar upgrades in Kaliningrad and Samara by 2018 and 2020, respectively. Capacity in Kazan and Sochi is to be quadrupled by 2018, while a new airport will be built in Rostov-on-Don by 2017, all in the European part of Russia.

Russia also stands to gain big intangible benefits. Currently Russian shares are the cheapest in the world as international portfolio investors have shunned the market due to its poor image; hosting the World Cup could result in a “football bump” in share prices on the back of the bonhomie that comes with the event, say analysts. Russia’s leading RTS index spiked sharply following the announcement for the successful bid and was trading at a post-crisis high of 1690 the following day. Other hosts have found the non-monetary benefits can be huge, and Russia could certainly do with some positive PR. In 2006, host Germany transformed its image from somewhat dour and overly-serious into a nation of smiling hosts welcoming the world to party-packed streets.

“It is no coincidence that the large sporting events of late have all ended up being awarded to emerging markets – this underscores their new-found importance on the global scene and are one of the great symbols of the re-arrangement of global influences,” says Monovski. "Think of the Beijing Olympics and the World Cup in South Africa. In all these cases, international opinion toward the host nation has changed for the better.”

The government has already promised free visas and heavily subsidised transport for fans travelling the huge distances between the host cities, which are divided into five hubs in European Russia, with Yekatrinberg the only venue across the Urals.