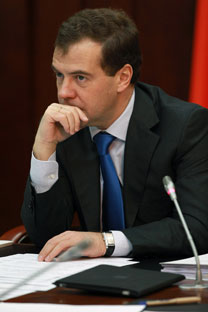 At the end of November, a number of seemingly unrelated but important messages came out of different branches of the Russian government. Taken together, they may signal a shift in the way the Russian political leadership wants to position Russia in the world.

First, Prime Minister Vladimir Putin wrote an article for the German newspaper Süddeutsche Zeitung in which he forcefully advocated the idea of a strategic partnership between Russia and the European Union. In essence, the Russian prime minister proposed the creation of a common Russian-European economic space “from Lisbon to Vladivostok.”

In this context, Lisbon was not meant as simply a geographic landmark; Putin’s proposal came on the heels of the Russia-NATO summit held there. At the summit, Russian President Dmitry Medvedev and the leaders of the alliance agreed to collaborate on building an anti-ballistic missile defense system (ABM) in Europe. If implemented, such a system could pave the way to the creation of a common Russian-European security space.

Critics would argue that Russian-NATO cooperation on ABM is far from assured and that Putin’s strategic partnership proposal sounds more like a dream than a solid business plan, yet both Russia’s willingness to mend fences with its sworn Cold War enemy and its desire to become engaged economically with the EU seem to indicate that Moscow now considers the European direction of its foreign policy as a major, if not the major, priority.

Second, on Nov. 26, the Russian State Duma, passed a resolution acknowledging that the 1940 Katyn massacre of 20,000 Polish citizens was committed on the direct orders of Soviet dictator Josef Stalin. The resolution went on to express the Duma’s “deep sympathy for the victims of this unjustified repression.”

A cynic might wink mischievously and note that the Duma resolution conveniently preceded Medvedev’s visit to Poland on Dec. 6-7. However, when presenting the resolution, sponsor Konstantin Kosachev, chairman of the Duma’s foreign affairs committee, called the document “historic” and stressed its importance for the Russian people, who were also victims of Stalin’s crimes themselves. The competent and well-informed Kosachev could not, of course, be unaware that in January, Medvedev will be holding a meeting of his Human Rights Council focused on the topic of de-Stalinization.

Third, three days before the Duma session, Medvedev caused a stir among Russian pundits with a video blog address in which he warned about “stagnation” in Russian politics and called for more political openness. However unlinked Medvedev’s video comments and the Duma resolution might first appear, they both work toward changing Russia’s image abroad – by trying to shed its reputation as a giant that craves its Stalinist past and menaces its neighbors.

Finally, on Nov. 30, President Medvedev gave his third annual address to the Federal Assembly. Given that Medvedev’s first address was devoted to political reforms and the second to economic modernization, many experts predicted that Medvedev’s third address would focus on social issues. They were correct. The core of the president’s speech was the thesis that modernization, both in political and economic spheres, is just a tool to solve the country’s most pressing social problems: negative demographic trends, ecological deterioration, and worsening situations in education and health care. But what made the address somewhat unique was Medvedev’s focus on child welfare. In a show of passion, completely unprecedented for a Russian political leader, Medvedev concluded his speech with the following:

“Everything we do, we do for those whom we love the most. It’s our kids, for we wish them to live better than us, be better than us and achieve what we didn’t have time to achieve.”

Many Russian analysts called the address “bland” and accused the president of missing the opportunity to propose a set of breathtaking political reforms, including, for example, the formation of a new political party. Well, apparently the president and his advisors knew what every political analyst is supposed to know, too: One year before the beginning of a new election cycle, the country’s president should focus on things about which the citizens care the most: the welfare of their families and, yes, their children. (Incidentally, political parties are held in very low esteem by ordinary Russians, as public polls repeatedly show.)

Besides, by publicly displaying his affection for Russian children, Medvedev, himself the father of a 15-year-old, might have again attempted to present Russia in a more positive way: As a kinder and gentler country. The gentle giant, so to speak.

Eugene Ivanov is a Massachussetts-based political commentator who blogs at The Ivanov Report.