FIFA: The only organization that finds Putin sexier than Prince William! 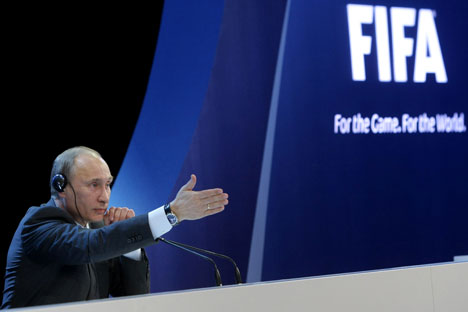 I don’t know if you tuned in to Larry King Live last night, but he had a real chin wag with Putin and I don’t mind telling you that my blood ran cold despite the Tanqueray I was putting into it, but one did not have to be Zbigniew Brzezinski, nor indeed that guy from WikiLeaks (don’t you just ADORE the Batman and Robin thing?) to figure out that the news on the FIFA front was going to tip in Russia’s favor, which of course it did today. I’m not a huge soccer fan, and normally I don’t give a toss (pun intended) about where or when the World Cup happens so what I want to know today is what are the FIFA people on and where can I get some of it? What can they be thinking?

What I can't shake is the image of Prince William as the Winkelvoss twins, with Putin in the Zuckerberg role during the negotiations. Everyone looks the part, and the plot bears out...

All in all, its been quite a week in the news for Russia. Regular readers of this blog will know that I don’t usually delve into Russian politics: I’ve got other fish to fry and there are plenty of superb journalists, pundits, and bloggers out there who do cover these things, and cover them well, so I thought I would highlight some of my colleagues on the Wikileaks, Putin and the King, the World Cup and all that stuff.

But first, thanks to my friend Katya who posted this hysterical video to Facebook and thus brought my attention to it, let’s set the scene, by watching Boris Badinov Vitaly Mutko, Minister of Sport and Tourism make a speech in English concerning Russia's 2018 World Cup bid:

From the ridiculous, then, to the sublime and Al-Jazeeera's Laurence Lee covering the FIFA bid process last summer, delving into the machinations behind the bid and the controversy over the bribe allegation. Be sure to check out Mr. Alexei "Smoothy" Sorokin who is in charge of Russia’s World Cup Bid. Classic 2nd generation if you know what I mean:

What’s your take on the World Cup thingy? Do you think the World Cup and the WikiLeaks are connected? Talk it up by hitting the comment button below!