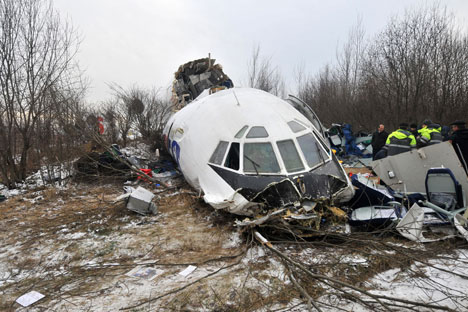 The pilots reported that all three of the engines on the jet operated by South East Airlines, formerly known as Dagestan Airlines, failed about 15 minutes after a 2 p.m. Saturday takeoff from Moscow's Vnukovo Airport en route to Makhachkala, the Dagestani capital, investigators said.

The crew decided to make a quick emergency landing at Domodedovo despite poor visibility and the fact that the plane still had tanks full of fuel, which meant a risk of explosion on impact.

Clouds were hanging at a low altitude of 180 meters in the area, meaning that the pilots could not see the runway until the last minute, Alexander Neradkom, a spokesman for the Interstate Aviation Committee, told reporters.

Upon landing, the brakes failed and the plane hurled off the runway at about 200 kilometers per hour, the Investigative Committee said in a statement.

The jet slammed into a small hill, narrowly avoiding a potentially dangerous collision with a concrete barrier around the runway, Gazeta.ru reported, citing Domodedovo employees.

An S7 Airbus jet crashed into a concrete barrier and burst into flames after skidding off a rain-soaked runway in Irkutsk on July 9, 2006, killing at least 124 people.

The South East Airlines jet broke into three parts, and passengers had to leap from the plane, with some breaking their legs, after the emergency chutes failed to deploy, Gazeta.ru said. Cell phone photos made by the passengers show the shattered plane lodged among thin trees, its nose and a wing torn off.

Some pilots called the crash landing a “miracle,” news reports said, and the plane's passengers concurred.

“The crew did a good job. They did everything in their power,” an unidentified passenger told Interfax. “If we had slammed into the nearby barrier, we would have exploded."

Passengers said they did not panic because they had not been informed that the engines had failed.

Possible causes for the crash being batted about in the media are pilot error, poor-quality fuel and a technical malfunction.

Interfax, citing an unidentified law enforcement official, reported that the pilots probably forgot to turn off the jet's fuel booster pumps after takeoff, causing the engines to shut down.

Vnukovo Airport said in a statement that "soon after takeoff the crew reported the consecutive failure of all three jet engines.”

The Interstate Aviation Committee said one of the engines soon resumed working and “kept on working up until the landing at 2:36 p.m.”

The Investigative Committee said it was examining the pilots' actions but had no solid theory for what had caused the engine problems.

“The investigation is considering all possible versions, but none of them has been granted priority,” the Investigative Committee said in a statement Sunday.

Preliminary data from the plane's flight recorders were expected to be released late Monday.

He also dismissed speculation that the aircraft, built in 1992, might have been experienced a mechanical failure, saying it underwent a complete overhaul last year at Vnukovo.

The jet was used in mid-November to fly Belgium's national football team to Voronezh — a flight that confirmed it met European safety requirements, Omariyev said.

South East Airlines, which still calls itself Dagestan Airlines on its official web site, Dagair.ru, announced its rebranding in January, and the plane that crashed Saturday had been repainted in new red and blue livery colors.

The crashed Tu-154 was among the airline's fleet of 10 planes and one helicopter, according to the company web site. The airline offers regular flights between Makhachkala and four destinations: Moscow, St. Petersburg, Istanbul and Sharjah, United Arab Emirates.

Vnukovo Airport said the Tu-154 received the same fuel on Saturday as dozens of other planes, none of which reported any problems.

The Tu-154 jet arrived at Vnukovo from Machachkala shortly after noon and departed for the return flight with 160 passengers and a crew of nine.

Eighty-two people were injured in the crash, and 36 remained hospitalized late Sunday, including three in serious condition, the Health and Social Development Ministry said on its web site. Dagestani Justice Minister Azadi Ragimov was among the injured.

Forty-one passengers from the ill-fated flight flew to Makhachkala on Sunday together with coffins containing the two killed passengers, Interfax said.

Saturday's crash is the third serious incident involving a Tu-154 since the start of the year. A Tu-154 crashed while trying to land in heavy fog in Smolensk in April, killing Polish President Lech Kaczynski and dozens of other senior Polish officials. Pilot error has been blamed for the crash.

In September, a Tu-154 made a spectacular emergency landing at an abandoned military airfield in the Komi republic after its power system failed. President Dmitry Medvedev awarded the pilots with state honors for conducting the landing without any injuries among the 81 passengers and crew.