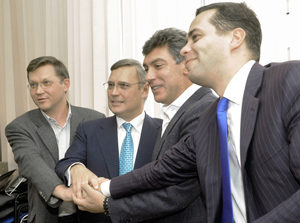 As the new year approaches and western Europe continues to stare into the abyss of sovereign default, Russia is looking forward to an increase in economic growth. But even Russia’s leading officials admit that the state is driving the economy while consumers and private industry have yet to recover from the shock of 2008. This must change or Russia will be caught in a “period devaluation trap,” according to Deputy Economic Minister Andrei Klepach. So far, however, the state has be unable to come up with anything better than pumping more investment into the economy through massive state-owned enterprises. The race is on for Russia to make deep qualitative changes in the nature of its economy or be consigned to the boom-bust cycles of one overly dependent on commodities.

A troika of top Russian officials met at the Adam Smith annual Russian banking conference in early December and laid out a set of encouraging macro economic results. On its face, the pace of economic growth is picking up, while the deficit has fallen further and faster than anyone expected; Russia’s economy appears to be among the healthiest in the world. On closer inspection, however, the official numbers disappointed and the private sector appears to be moribund. The government’s results paint a rosy picture in the European context of bailouts and spiking CDS spreads, but it is the blanks in between that are the cause for worry. The bottom line is that the state and state-owned business have enough money and momentum to keep the economy climbing out of the deep hole it fell into in 2008, but everyone is still waiting for consumer and small business confidence to return to the point where Russians start to shop again and businesses start to invest again.

“Russia enjoys a very low debt-to-GDP ratio of about 10 percent, so we can borrow and remain reluctant to cut spending. The deficit is projected to be 4.8 percent this year and 3.6 percent next year before falling to zero in 2015,” Deputy Finance Minister Dmitry Pankin told delegates. “We are not under a lot of pressure and we can continue fiscal stimulation as there is no danger of solvency problems.”

Still, Russian economic growth remains very fragile. The economy bounced back in the last part of 2009, and this growth extended into the start of 2010, according to Klepach, but it began to falter even before the blow dealt by the summer’s fires. More fundamental domestic-based consumption-led growth appeared only in the last months of 2010.

“The growth of the Russian economy was almost exhausted in the first quarter of 2010, but then it started to recover in September,” Klepach said. “At the start of this year, the key drivers of the economy were all external and supported by the recovery of oil prices, which goes hand in hand with [the growth in] Russia’s GDP. So in September we saw the start of a third wave of growth and expect that growth for the full year will be about 3.8 percent.”

As he went on, a picture of a state-led economic recovery appeared from the statistics.

“In fourth quarter, we saw the start of a pick-up in investment, which was faster than expected: We were expecting a 2.5 percent [increase in the rate of investment year-on-year] but in October saw 5.5-6 percent,” said Klepach. “Much of this investment was going into energy and into the metal and engineering sectors. But it is hard to get a clear picture of what is happening in investment as the state is also investing heavily under state programs.”

Unemployment numbers paint a clearer picture. Again the macro results were better than expected, but micro results—the numbers that give some insight into the action on the ground—were disappointing.

“At the same time, unemployment dropped faster than expected, but all in all, the sectors are now employing fewer people even though those people are paid more than before the crisis,” said Klepach. “The change in consumption is not reflected in these numbers and has remain more-or-less flat and well below government forecasts: retail turnover growth won’t reach the government’s forecast of 5 percent this year.”

Indeed, according to the latest forecast, consumer growth will come in at closer to 2 percent for the year. What happened before the crisis was that increases in income caused a magnified growth in the retail sector such that an approximate 5 percent increase in income turned into a 15 percent-plus increase in consumption. But while real income has risen over the last two years—this year incomes are up some 5 percent—retail sales have multiplied down.

This strongly suggests that Russian shoppers are still feeling shell-shocked by the crisis and have changed they way they buy: Instead of levering their ever-increasing incomes to buy on credit, they are instead saving up and waiting until they can buy goods in cash. In other words, Russian shopping habits have reverted to those of pre-2001, when retail credit first appeared.

This behavior multiplies the problems facing the private sector in Russia. Companies can’t invest unless they have rising sales, since Russian private industry is now suffering from overcapacity. The state, however, continues to find money for investments.

“The key drivers for 2011 are all the natural monopolies’ plans [for investment]– nothing is expected from the private or SME sectors – so the state is leading the recovery,” Klepach said. “The investment plans by Gazprom alone will have a huge impact, while investment in other sectors is still minimal.”

Klepach also pointed out some worrying changes in the structure of the economy. What sales increases there have been are mostly going to imports, bringing more bad news to domestic industry.

“The growth of the internal demand is mapped to imports,” said Klepach. “Now the ratio of import/export production is worse than before the crisis. Food imports have fallen or remained stable due to the protectionist measures. However, in durables and investment sectors, the sensitivity to imports is enormous and their gain is enormous. Joining the WTO will not help and won’t slow the growth of imports – in fact it will do quite the opposite and exacerbate it,” Klepach said.

Klepach was also negative on the outlook for the recovery of consumer spending, and suggests that income growth now is below a level that can kick-start the pre-crisis circle of spending, profits, investment and wage increases.

“The second key question for the growth in 2011 is what will the consumer do? Incomes are still rising, but they are rising half as fast as they did pre-crisis. We expect that lending will increase, but this is counteracted by the changes to the saving levels of the population,” said Klepach. “Russians have traditionally been big savers, with 20 percent of total income being saved. However, saving fell heavily in the crisis to 13 percent before rebounding to 19 percent. From here on, the level of saving will slowly fall to about 13 percent in 2013.”

This is bad news, since if this trend continues, the value of the ruble will come under pressure. The ruble had been appreciating strongly in the years before the crisis, but has fallen in value over the last year. Indeed, Klepach said that if there is no change in current trends, Russia will face another bout of devaluation of the ruble in order to bring it into line with new structure of the economy.

“In 2012, the ruble appreciation will stop and there will be a devaluation shake up. This happens every few years,” said Klepach. “Or we will have to dramatically open our economy to foreign investors and get a steady flow of investment.”

Will this happen? Alexei Ulyukaev, first deputy chairman of the Russian central bank, the third member of the troika to speak at the conference, offered a bit more hope. Like the others, the picture he painted of the banking sector was positive. Non-performing loans, capital adequacy ratios and liquidity in the sector are all extremely strong. More importantly, he pointed out that lending is recovering and lending to consumers is growing the fastest.

“We expect lending to grow by 12 percent by the end of the year,” said Ulyukaev,” which if you take out 8 percent inflation is a real increase of 3 percent, but retail lending is growing faster than corporate.”

He went on to say that private banks are increasing lending faster than state banks, which is also good news as they have been, “more realistic about the state of the economy than the state banks.” He also said that banks were in robust health and that the lower-than-expected bad debt levels will give the banking sector a capital boost in the new year.

“The need to increase bank capital will be solved organically as reserves [set aside to deal with bad debt] are at a historical high and next year some of this money will be transferred to boost the capital base,” said Ulyukaev.

Ulyukaev’s comments give some cause for optimism, as clearly retail borrowing is growing. But the main drag on Russia’s growth is a lack of confidence among people and small business owners. And why shouldn’t there be? After all, this is a population that has been hit by three major crises in the last 20 years. In the previous crises, it has typically taken four years for confidence to fully return and this crisis is only two years in. Most analysts are expecting next year to be much stronger, but the current picture suggests that while the state-led recovery will lead to improvements next year, the really strong growth led by investment, construction and spending may not appear until 2012.

Vasily Vysokov, president of the Rostov-on-Don progressive Center Invest bank, put his finger on the problem. “We shouldn’t increase the rate of growth of a bad economy, but use the crisis to change the nature of the economy and its direction. The state support takes money out of the pockets of those that work well and puts it in the pocket of those that work badly,” said Vysokov.

Happily, the state seems to get it, which is what Russian President Dmitry Medvedev’s modernization drive is all about. Unhappily, the state is not doing very well at implementing this program, and the fact that all the plans for improving the economy in 2011 rest with the “surprises in store from Gazprom’s investment program” testifies to the government’s inclination to make a difference. Still, at least the Kremlin realizes the scale of the problem, and also what needs to be done to avoid failure.

“The economy is now starting a new phase of growth where there will be big qualitative changes. Otherwise the economy will not be competitive and we will not be able to escape this periodical devaluation trap,” said Klepach.