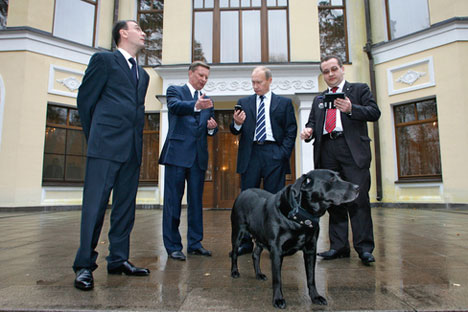 This is a story whose outcome may ultimately hinge on a dog named Koni.

For decades the knock on the Russians has been their inability to bring to everyday consumers the fruits of military-funded technology. In the West, government-funded innovations, whether the Internet and the web, miniaturization of electronics, hand-held phones or cutting edge composites for civilian planes, all allow for a standard of products that in theory Russia should be able to also provide, but has usually been unable to deliver.

The failure of the Russian launch vehicle Proton high above the Pacific Ocean on Dec. 5—and the resultant loss of its three small navigation satellites—highlights both the progress made by the Russians in finally commercializing their space technology, and the hurdles still to overcome.

Personal navigation devices are just one of the next generation products that are coupled to our cars, boats and phones. The technology is made possible by a fleet of small satellites that swirl about the earth just hundreds of miles above us. Known as GPS—for Global Positioning System—it has been a boon both to consumers and to the U.S. military, which uses the system for everything from drone attacks in Pakistan and Afghanistan, to nuclear missile coordination to keeping track of troop movements. Like the Europeans and Chinese, the Russians have wanted their own system independent of the Pentagon's policy of degrading the signal for civilian use. (That's right, if consumers had the same capabilities as the military, you would know where your friends were within inches). It is a point of national pride for other nations to establish their own communication systems, both to free their navigation from U.S. control as well to prove that they can enter the cutting-edge techno world of the U.S. military.

The Russians have worked to reach operational capacity in their own system, known as GLONASS (in English, Global Navigation Satellite System). Right now, the Russians have 26 satellites in orbit, providing full coverage over Russia. That's the good news. And more good news: The latest satellites, the GLONASS-K, are pretty sophisticated, almost as good as the Americans. But the bad news. It is not really the launch failure; that happens in the space business. No, the key question is whether the Russians can commercialize the technology. As usual, the chosen path by the Russians has been a top-down one, with Russian Prime Minister Vladimir Putin blessing the effort to bring about a Russian driven commercial system—this time in a rather unusual manner.

On Oct. 17, 2008, Russian television viewers were treated to the spectacle of Putin's black Labrador being given a collar linked to the GLONASS system. Deputy First Prime Minister Sergei Ivanov proudly told Putin that it was the "first such collar in the world." What brought this about was a question: Six months earlier, the prime minister reportedly asked Ivanov, "where can I buy a collar to track my dog via our navigation system?”

This August, Ivanov called for a 25 percent import duty on all GPS-capable devices unless they are compatible with GLONASS; this would include the latest generation of smart phones. Also, starting in 2011, the government has demanded that all cars made in Russia, including foreign brands, utilize the GLONASS system. Will this regulatory approach work? Why not negotiate an incentive plan for manufactures? No one doubts that over time the Russian system will be a serious alternative to the American one, but why the need to push a system on Russian consumers that is not fully ready for prime time?

The launch failure of the Russian workhorse Proton rocket was more than likely, according to early reports, the result of a foolish programming error in the software. Russian President Dmitry Medvedev has called for an investigation of the entire program. That’s probably not necessary. The technical issues of the satellites and the launch vehicle can be overcome and the Russian space program will soon signal its own return to the world stage as a formidable defense supplier of space-age tools. But can Russia deliver a consumer success? The verdict is still out.

So for now, Koni remains the only dog in Russia whose whereabouts can be tracked via a domestic satellite system.

Jeffrey Manber is the author of Selling Peace, which chronicles the coming together of the Russian and American space programs in the 1990's. He is a frequent contributor on space-related developments.