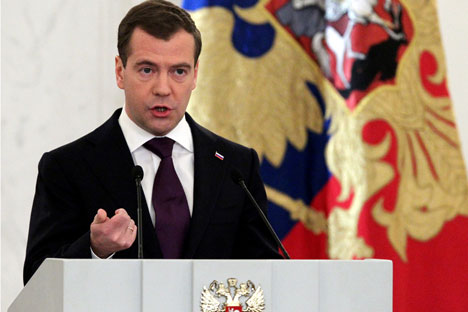 Prime Minister Vladimir Putin took on the Western critics while President Dmitry Medvedev stuck to nuts-and-bolts domestic policy in the state of the nation address. The change seemed to disorient some pundits, who billed Medvedev’s speech as an opening salvo in the 2012 presidential campaign. Russian insiders took the opposite view that Medvedev’s somewhat limited forward agenda indicated he would step aside for Putin.

In an interview this month with CNN’s veteran interviewer Larry King, Putin issued a thinly veiled warning of an arms race with the United States if a new START treaty is not signed, and blasted U.S. diplomats’ criticisms of democracy in Russia leaked via Wikileaks.

In contrast, while Medvedev’s state of the nation address also mentioned the nuclear issue, it largely focused on social issues like child welfare and demographics. For Medvedev, it appeared to be a return to policies that he first tackled as part of his “National Projects” brief as a first deputy prime minister back in 2006.

Putin was in characteristically trenchant form, rebutting Western criticisms of Russia filtered through the Wikileaks data dump of U.S. diplomatic cables this week. (See full transcript at www.rbth.ru) Larry King kicked off the interview with a blunt question about whether Putin intended to run for president again.

“We work in close contact with President Medvedev,” Putin said, reiterating an oft-repeated response. “We have long ago decided that we will take a concerted decision on the 2012 elections in the interests of the Russian people.”

The question came as pundits tried to make sense of President Medvedev’s third state of the nation address before the Federal Assembly, with many considering that it carried little or no political significance in an ongoing behind-the-scenes game in which the tandem are not yet revealing their intentions.

“This address comes at the end of the year when the budget has already been drafted, and it cannot in any way influence strategic tendencies. It is an address into emptiness,” Lilia Shevtsova, a political expert at the Carnegie Moscow Center, told The Moscow News. “With this address, Medvedev has proven that he is not the national leader with strategic thinking.”

While some analysts painted the 72-minute speech as the beginning of a campaign, Shevtsova said it was useless to read it as a signal of any political plans. “I’m not even going to guess.” Medvedev began his address by summing up responses to the global economic crisis and reforms that had already been carried out. A major segment on child welfare noted several specific measures to be implemented in 2011, but largely focused on a general need to improve the situation, without laying out a specific strategy, some analysts said.

It appeared to be the speech of someone who does not intend to run for re-election as president, said Olga Kryshtanovskaya, a leading political analyst and United Russia member. “He was making periods, not commas. But for a subsequent presidential term he would have needed to make commas, and create the sense that he was here on a mission, and he needed to complete it. But the [emotion] that one would expect from someone who planned another six years in the presidential seat ... was absent.”

Kryshtanovskaya cautioned against drawing any firm conclusions, saying she believes the two had already mapped out several scenarios long before Medvedev became president. “It is considered that the biggest political mistake in Russia is to reveal your plans ahead of time. That is why political circles conceal their real aims until the very last moment, trying to confuse experts and the international community.”

It was wrong to read any political meaning into the address, said Vyacheslav Nikonov, head of the Politika Foundation. “Those questions being discussed by journalists, they do not concern him,” Nikonov, a longtime Kremlin insider, told The Moscow News. “Journalists are talking about one question, 2012, while Medvedev is [just] working.”