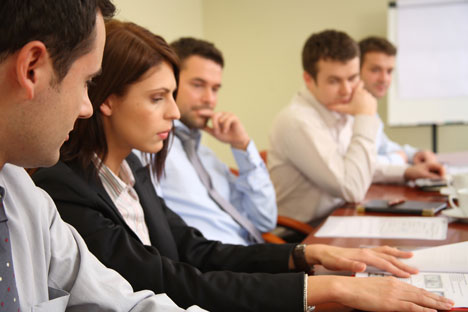 How can the Russian government leverage the potential of women to modernize the country? Are Russian men ready to surrender some of their power to their female colleagues? And why is Russia lagging behind other CIS countries in terms of gender equality? These were the questions discussed the Women’s Potential in Social Development conference held as part of the 5th Moscow Society and Government civic forum.

For starters, let's look at some gender statistics. Moscow is the most feminine city in Russia in terms of population. Fifty-six percent of Muscovites are female. The average across Russia is 54 percent, while in the United States, it is 51 percent The imbalance will only get worse: Experts believe that by 2030, for each 1,000 men, Moscow will have 1,196 women. Among other factors, the trend is driven by life expectancy. While in Moscow women live an average of 73.9 years, men have a life expectancy of only 61.3 years.

The longer life expectancy is, perhaps, a woman's only advantage over a man in Moscow. “Over the last 10 years, we have clearly seen that women tend to be ousted from the real economy and into the retail and service sectors," said Galina Sillaste, a professor at the Financial University of the Government of the Russian Federation and president of the international association Women and Development. She believes that today Russian women face the highest level of gender discrimination in the workplace in the last 50 years. A woman’s average salary is only 64 percent of a man’s pay at the same job. The most common rights violations occur during hiring (men are preferred candidates) and layoffs (women are the first to get the axe).

It’s no wonder that the majority of Muscovites living below the poverty line are women and children. The myth about women’s extraordinary ability to endure stress doesn’t hold up either: Alexandra Lyashenko, Director of the Moscow Public Psychological Aid Service, says that 77 percent of counseling requests come from women. Of course, it can be argued that men are generally less inclined to seek psychological help, but both men and women have been proven equally prone to commit suicide. Incidentally, Russia is among the top five countries with the highest suicide rates. Although Russian women have long been reputed for their patience and selflessness, even their extraordinary endurance can apparently wear thin.

Feminism as a curse word

Russians rarely find themselves discussing women's rights. Men stay away from the subject for obvious reasons, and women are afraid of being branded as proponents of feminism, a rather disparaging word in Russian usage. It’s no surprise that fighting for gender equality in its western sense never took root in Russia. The inertia has its historic explanation. First, most Russians still stick to patriarchal values (according to a recent survey by the Russian Academy of Sciences Sociology Institute, two-thirds of the Russian population lean towards a traditional mentality). Second, most social gains came to Russian women the easy way thanks to the Bolsheviks who, upon capturing power, proclaimed equality of the sexes. Vladimir Lenin’s colorful phrase, “any lady cook can govern", is still a popular, although negatively charged, quote in Russia. It is symbolic that the leader of the Russian revolution used the feminine form of “cook” (in the Russian language) and not, for example, the word “street cleaner” (which is grammatically always masculine).

Some of the few real welfare safeguards inherited from the Soviet times are those related to maternity and child care. Russian women enjoy one of the longest maternity leaves in the world, putting Russia way ahead of Europe and the United States. On top of that, the Russian government generously hands out benefits to mothers in order to reverse the demographic decline. However noble this may be, such financial aid carries an underlying message: we, the government, pay you, women, for staying in your conventional roles of wives and mothers whose job is to augment the birth rate of potential state workers.

This government policy has brought criticism from the United Nations Committee on the Elimination of Discrimination against Women. In July, Russia presented to the UN its report on women’s rights in the country. In its conclusion, the UN Committee noted that “the committee is concerned that the member state (Russia) has repeatedly emphasized the role of women as mothers and housekeepers. The committee is concerned that such custom and practice perpetuate discrimination against women, thus being reflected in their unfavorable and unequal status in many walks of life. The committee believes that to achieve equality between men and women, it is important that women should be regarded first and foremost not as wives and mothers, but as individuals and citizens that are equal with men in terms of their standing in society."

Russia was the first CIS member-state to sign the UN Convention on the Elimination of Discrimination against Women. The next step was supposed to be the adoption of a law on gender equality. The good intentions, however, stalled precisely at that point. “The bill was drafted back in 1999 and passed the first parliamentary reading in 2003, but no progress has been made since. Meanwhile, nearly all CIS countries have passed their respective gender legislation based on the Russian template,” said Natalya Grigoryeva, a professor at Moscow State University and a member of the Academic Council on Gender Problems at the Social Sciences Department of the Russian Academy of Sciences. The proposed law bans any discrimination against women. It also requires all draft laws, including the state budget, to undergo a gender review and all government bodies to enforce an increased representation of female public service employees. For example, 30–50 percent of European public offices are occupied by women. This requirement provoked particularly fierce opposition from Russian male MP’s: “Do you want 30 percent of men to just leave their jobs to be replaced by women?” Naturally, the draft law ended up on the shelf.

A similar reaction to promoting women to senior positions can be observed on all government levels. Even the top 100 people in the presidential administration’s succession pool include only 11 women. Does Russia really have 10 times fewer qualified and competent women than men? UN experts, too, raised their brows at the unfair ratio and pointed out: “the number of women in federal legislative bodies is small and they account only for a marginal share of specialists included in the nationwide government succession pool.” The committee also has concerns with regard to limited representation of women in the country’s public, political and economic life, including diplomatic roles, university professorships and senior executive positions.

The next time Russia will report to the United Nations on eliminating discrimination against women will be four years from now. That is if, of course, there is anything worth reporting.

Even in this harsh gender environment, Russian women still manage to achieve personal and professional fulfillment. Success stories can be found in a wide variety of careers. What many overlook is that a Russian woman usually has to work twice as hard to prove herself worthy of an executive role. As for the less successful, they are compelled to accept, apart from retail and service sector jobs, positions that, for some reason, men avoid. An example would be a job that require assiduity and thoroughness, or in other words, doing paperwork. Characteristically, 68 percent of people in medium and entry-level position in government agencies are women. Another interesting finding mentioned at the conference was that this year, Russian military universities that admit women have received 25-30 female applications per slot. If men don’t want to serve, women are stepping in to take their place. This is a case of history repeating itself: women contributed extensively to the Soviet Union’s victory in the Second World War. In those times, they meritoriously served as pilots, reconnaissance agents and snipers, not to mention doing all the work that they had to do after men had been mobilized to the front.

Women were able to handle these formidable tasks, and they will be able to do the same with modernization as well. But please, there’s no need to wait for another war.