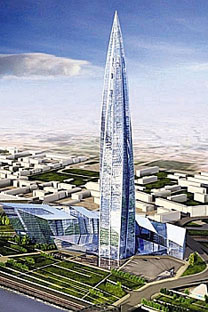 “We had talks with Gazprom and took a mutual and final decision about moving the project to another site,” she was quoted as saying by Ekho Moskvy radio station.

Matviyenko made the statement during a planned meeting with journalists during a congress of construction businesses in St. Petersburg. She said she had already signed the decree.

Last week, Matviyenko first admitted that the move was possible. “We are interested in ensuring that the city is unified, that there is no tension and confrontation,” she was quoted by City Hall’s official web site as saying on Dec. 3.

A new site for the planned skyscraper has yet to be selected.

St. Petersburg residents, preservationists and the political opposition have been battling against the project since it was announced in 2006 — despite considerable pressure from the authorities as both the Kremlin and City Hall demonstrated full support for the project.

Opponents warned that the planned skyscraper, which was to house the headquarters of Gazprom Neft, threatened to destroy St. Petersburg’s UNESCO-protected skyline, among other objections.

Another fear was the threat to archeological findings on the site that was once home to two medieval Swedish fortresses and a Neolithic settlement.

“It’s a victory for the whole of St. Petersburg, it can be credited to all those who fought against all the odds, in the face of being told that doing anything was hopeless; it’s a victory of the spirit over the belly, a genuine achievement for civil society,” said Maxim Reznik, chair of the local branch of the Yabloko Democratic Party.

According to Reznik, the party’s firm stance against the project led to his party being dismissed from the local parliamentary elections, when the signatures needed for the party to be registered for the elections were declared “inauthentic” by the St. Petersburg election committee in 2007.

“We paid a high price, but it was worth it,” Reznik said.

“It was strange to have to fight for four years for things that are so obvious,” said Pyotr Zabirokhin of the preservationist organization Living City.

“It’s a first concrete move that should put an end to the project in its current form, which is exactly what the defenders of St. Petersburg have fought to achieve over the past few years.”

The Other Russia political party’s local chair Andrei Dmitriyev described the Okhta Center’s cancellation as a “great victory for the whole of civil society and the opposition,” but warned that other controversial projects could appear under the political system created by former president Vladimir Putin.

“I wouldn’t want to indulge in euphoria; we will only be able to solve our problems when the St. Petersburg authorities are accountable to city residents,” Dmitriyev said.

“A hundred Okhta Centers could appear in every sphere of life, and until we start electing the governor, until we have honest elections and until we have normally organized self-government, such situations will appear all the time, and we should demand political reforms.”