Russia’s new battle cry: How can we help each other? 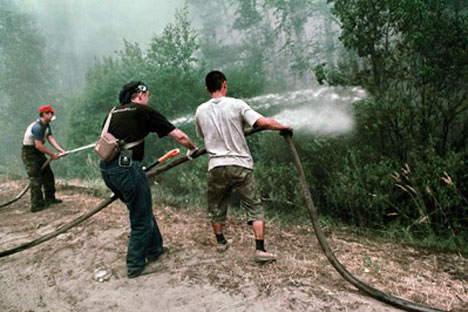 Volunteers put out a fire near the village of KreushaSource: Ria Novosti

Marina Litvinovich, 36, a popular opposition blogger, was surfing on her computer this summer when the wildfires swept through forests in the parched countryside. She noticed two types of comments accumulating on different Internet sites.

“I wrote a blog about how villages and houses were burning and that the emergency services ministry and the fire services were not coping,” she said.

The response was phenomenal. Within a few days, Litvinovich and a number of other volunteers had set up a website; they used a computer program, Usahidi, that had been used in Haiti after the earthquake there to allocate aid where it was most needed.

Hundreds of volunteers offered their help.

Volunteerism is clearly on the rise in Russia, where a young, Internet-savvy generation of homegrown activists is emerging. These volunteers represent a new middle class interested in fighting social problems and willing to react swiftly to those in need. Grassroots organizations, started by Russians, are replacing the Western-funded model of the 1990s. And the coordinated fight against the fires marked a new sophistication in the culture of Russian philanthropy.

During the fires, “there was a big wave of volunteering, people helped collect goods and then got in their cars and helped with the firefighting,” said Maria Chertok, the director of CAF Russia, a non-governmental charity aid organization that promotes philanthropy.

Other charities such as Miloserdie, a Russian Orthodox charity whose name translates as “Kind hearts,” also joined in to help those who had suffered because of the fires.

Unlike in the West, where people of all ages actively volunteer, the members of the volunteer movement in Russia are generally young. “Most are under 40 and have blogs on livejournal, they are not members of a party, not of any organizations,” said Litvinovich.

Internet campaigns occur with frequency, said Chertok. A blogger volunteering in a convalescent home drew attention to terrible conditions there, launching a drive to improve it. Local officials were sent in to check the home, and the publicity brought in new volunteers.

But the movement is both spontaneous and chaotic; Russia’s Public Chamber, an advisory committee to the Duma, met recently to discuss more coordination among state services and volunteers.

There is little precedent for charity in Russia: Before the revolution, there was a form of volunteerism but it was wiped out when the Bolsheviks came to power. “Ladies from high society would volunteer and do work for the poor and the orphans, especially during World War I,” said Chertok. But these values got lost in the new order.

Today, there is an emerging state-driven volunteer development as the authorities prepare for major sports tournaments such as the 2014 Winter Olympic Games in Sochi, the World Student Games in Kazan in 2013, and now the World Cup in 2018. Courses at three universities will train volunteers for these high-profile events.

With more volunteers, there is more need for training. Podari Zhizn, based in Moscow, helps children suffering from cancer and other serious diseases. It is also introducing training programs to help volunteers improve their skills and to help them deal better with sick children.

Anastasia Severina, 23, has a passion for volunteering. Previously, she volunteered for Nastenka, a charity that assists sick children. “When you are in that sphere you meet, good, nice people who are easy to get along with,” she said.

Severina said she had tried to work in business, construction, and the state, but felt herself drawn back to charity work and volunteering. These days, she acts as a resource for finding new volunteers for organizations through her blog.

Her most recent good deed was a call out for a husband and wife with seven children in Ryazan who appealed to her for help. “They live in a rundown house and don't even have proper food,” she said. Severina wrote about their most pressing needs on her blog and food and clothes were sent to the family immediately. “They have many problems,” she said about the family. “But I can tell people about them and we can try and help them cope.”