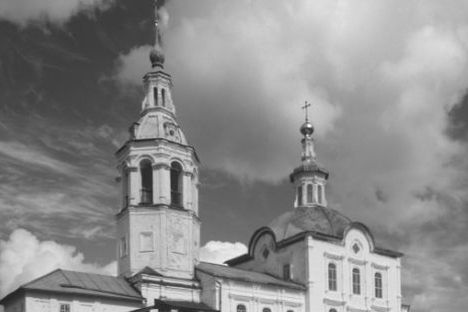 Although today Tyumen overshadows its Siberian neighbor Tobolsk, the smaller city still bears signs of its dominant position in the 18th century.
All photos by William Brumfield
Click to stop the slideshow. Click again to continue

Although Tyumen is now the capital of the vast territory that bears its name, this region was for much of its history ruled from Tobolsk, whose citadel overlooked the high right bank of the Irtysh River. Of the many rivers that run through Siberia, none has more historical and emotional resonance than the Irtysh, a tributary of the mighty Ob River and a critical artery for Russian movement into Siberia.

It was near the Irtysh that a hardy band of Cossacks, led by the legendary Yermak and supported by the Stroganovs from their fortress in Solvychegodsk, defeated the Tatar troops of Khan Kuchum in 1582. Although the precise dates are questioned by historians, it seems that in the fall of 1581, Yermak captured Chingi-Tura (later Tyumen), but abandoned his conquest in order to proceed straight to Kashlyk, capital of Khan Kuchum, where there occurred the epochal battle memorialized in a painting by Ivan Surikov. Yermak was himself killed in a surprise raid in 1584 and his conquests remained temporarily unconsolidated after his death. But Tsar Boris Godunov was aware of the enormous significance of Siberia, and launched an aggressive campaign to establish settlements. Tobolsk was founded in 1587 by the Cossack leader Daniel Chulkov at the confluence of the Tobol and Irtysh Rivers, near the site of Yermak's victory.

Tobolsk (population around 100,000) is sharply divided by the landscape into two sections, upper and lower. The lower part, closer to the Irtysh River, was the most intensively developed in the 18th and 19th centuries. Here lived the merchants—some of them in grand mansions—as well as the tradesmen and craftsmen. A number of well-built commercial buildings and warehouses have survived from the 19th century, although not always in good condition.

The lower town was marked by a number of churches that defined various sections. Most of the churches were Russian Orthodox, but Tobolsk also had a sizeable Polish diaspora, originally sent to the region in exile. Their presence led to the building of the magnificent late 19th-century Catholic Church of the Holy Trinity, recently restored. And there was a Tatar district, with a mosque, in the lower town near the river.

The upper part of the town was reserved primarily for institutions of power, the territorial administration and treasury, as well as the central prison. The earliest ensemble of historic buildings is located on a high bluff overlooking the lower town. Primary among these buildings is Siberia’s first cathedral, built in the 1680s with a dual dedication to Saint Sophia and to the Dormition. The presence of the Orthodox Church was particularly strong in Tobolsk, and as early as1620, Tobolsk had become the seat of the vast Diocese of Siberia. For this reason, Muscovite authorities considered it imperative to construct an imposing cathedral. Building the cathedral, however, required skills not available in Siberia, and a team of experienced masons was sent from Veliky Ustiug in the Russian north. The cathedral project was supervised by Vasily Larionov, a master builder from Moscow, who brought with him specialized materials and a plan of the recently renovated Ascension Cathedral in the Moscow Kremlin. The Kremlin cathedrals often served as prototypes for large churches throughout Russia, thus symbolizing the spiritual and political connections with the capital. Indeed, the expanded “Sophia Court” and “Merchants’ Court” (Gostiny Dvor), initiated by Peter the Great in the early 18th century and planned by the gifted Semyon Remizov, could be seen as a reflection of the Moscow Kremlin. Their construction was facilitated by the many captured Swedish soldiers sent to Tobolsk after Peter’s 1709 victory over Charles XII at the battle of Poltava.

The 18th century was a particularly rich time for the construction of churches in Tobolsk, many of which were elaborately decorated in a "Siberian baroque" style. Although most of these churches were severely damaged during the Soviet era, a number of them survived, and some are being restored in the lower town as resources permit. Among these remarkable buildings are the Church of the Archangel Michael (now beautifully restored), the Church of Saints Zacharias and Elizabeth, and the Church of the Elevation of the Cross, located near the Irtysh River. These three churches were built over a period of several years in the middle and latter part of the 18th century.

Among the few secular buildings to be well maintained in the lower town is the mansion built after the 1788 fire for the merchant Kuklin. This typical example of provincial neoclassicism was taken over by the government after Kuklin's bankruptcy in 1817 and converted into a residence for the provincial governor-general. Later the building acquired historic significance as several prominent 19th-century political prisoners were brought here before being sent to exile. With the demise of the Soviet Union, the irony of fate endowed the building with new significance. It was here that Nicholas II and his family spent a period from August 1917 through April 1918 before their transfer to Ekaterinburg, where they were murdered in July 1918. The interior of the mansion has been partially restored, with special emphasis on the study used by Nicholas.

The lower town has other imposing brick buildings (not always in good repair) dating from the late 18th to the early 20th centuries. Among these monuments is the high school attended for eight years by the renowned chemist Dmitry Mendeleev. Tobolsk also had large districts with large wooden houses, many with fanciful carved decorative detail. With the passing years the number of these distinctive buildings declines, as few resources are available to maintain them.

Today, most investment in business, administration and housing goes to the modern upper town. This area of the city was developed with the expectation that Tobolsk would share in the region’s petroleum boom, particularly with the construction of a refinery and petrochemicals plant. In Tobolsk, as in other major Siberian cities, the historic legacy of a turbulent but productive past exists in uneasy balance with the requirements of a functioning modern city. Fortunately, it is still possible to stand on the bluff of the upper city, at the edge of the Sophia Court, and survey the grand vista that beckoned the Russians into Siberia.