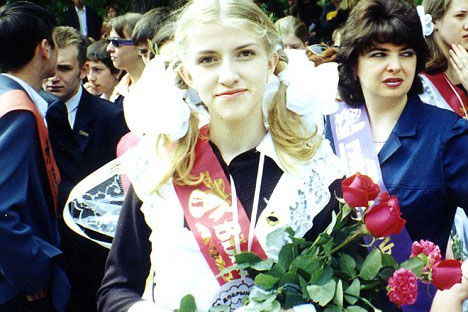 Katia Zatuliveter during her school years

The Russian Embassy in the UK believes the scandal involving the arrest of Russian citizen Yekaterina Zatuliveter, who is accused of spying, might have been fanned by “some quarters” in London that are unhappy about the recent thaw in relations with Moscow. The embassy is calling press reports were a “PR stunt” designed to distract the British public’s attention from more relevant problems. The Foreign Office never alerted Russian diplomats of Zatuliveter’s alleged intelligence ties, but if the Russian is deported for espionage, some British officials will have to leave Moscow.

Alexander Sternik, Russia’s Charge d’Affaires in the UK, has criticized the behavior of British officials and journalists in the case of Zatuliveter.

Sternik said the scandal involving Zatuliveter’s arrest was arranged on purpose to undermine the improvement in relations between Moscow and London. Asked if he thought British officials were behind the scandal, he said: “I sincerely hope that this is a spontaneous, sporadic and non-orchestrated campaign against Russia because it goes against the current of improving Russian-British relations. I simply do not see how anybody could be interested in spoiling these positive trends in such an obvious and idiotic manner.”

According to Sternik, it is very conspicuous that as soon as something positive begins to develop in the Russian-British relationship, these sorts of scandals break out. “That’s a fact of life,” the diplomat concluded. He also added that although “some quarters” want to undermine improving relations between the two countries, he is confident that this is being done despite, and not because of, the policy of the British Government.

The charge d’affaires expressed hope that the Zatuliveter scandal would not damage the improvement in bilateral relations, including a planned visit by British Prime Minister David Cameron to Moscow in 2011.

Sternik pointed out that “spy scares” appear on a regular basis in the British press and were usually “PR stunts” to make sure that attention is not focused on “more acute and tangible problems,” such as the WikiLeaks disclosures and England’s failed bid to host the 2018 World Cup.

Sternik was critical of the Foreign Office’s failure to alert the embassy about Zatuliveter’s arrest; consular officials found out about it from the mass media. “We have a bilateral consular convention that specifically says that the sides must immediately notify each other should arrest or detention of their citizens take place. We have been very disappointed with the passiveness that was shown in this respect,” Sternik said.

He added that Russian diplomats have still not been allowed access to Zatuliveter, who is being held at an immigration center, The Daily Telegraph reported. Sternik said he had contacted Zatuliveter by e-mail and would visit along with a doctor as soon as the British Government allows. He believes Zatuliveter might have suffered a serious psychological trauma because of the scandal, and the embassy wants to make sure that “her psychological and physical condition is stable.”

The Foreign Office eventually told the embassy that Zatuliveter had been detained under immigration law and has not mentioned any spying allegations, he said. “That of course remains a striking contrast with what the press is saying about the reasons for her detention. We have not received, although we insisted on this, any clarification as to the motives and the reasons that she was detained,” said Sternik.

Asked if Zatuliveter had done anything that could be construed as spying, Sternik said: “What we know is she is a legal resident in the UK with a valid visa.”

Sternik pointed out that some British officials might be shown the door from Russia if Zatuliveter is deported on espionage charges.

Zatuliveter worked as an assistant to Liberal Democrat MP and PACE member Mike Hancock. She had been under MI5 surveillance for the past five months on suspicions she was passing information to Russian intelligence. A series of questions about British national security and defense have emanated from the office of Mr Hancock over the past few weeks, including the nuclear arsenal composition, overseas naval bases, and the Trident nuclear submarines.

Zatuliveter denies all of the charges and said she would fight her deportation. Hancock also said he had no reason to believe she did anything wrong, saying that she had been vetted by security services before being admitted to work in Parliament. After the Zatuliveter scandal broke out, however, it was reported than Hancock had several more Russian female assistants at the Council of Europe. Colleagues of the MP, known for his pro-Moscow views, say he simply has a soft spot for attractive young women from Eastern Europe. Alexander Sternik said on the other hand that Mike Hancock was a parliamentarian who “showed a balanced and objective approach to modern Russia and its foreign policy.”