Examining the world, one BRIC at a time (+video) 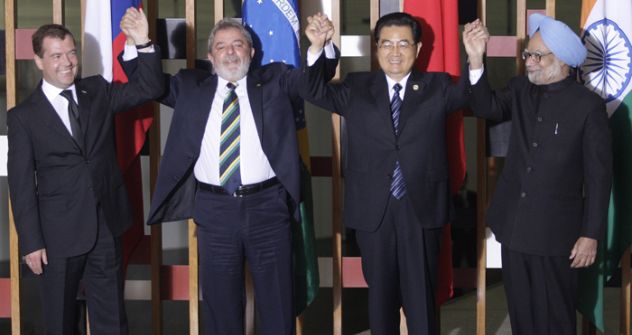 With the US and Western European economies cast into perennial crisis, there is an almost universal consensus that emerging markets will drive global growth in the coming years. China, with the world's largest population and double-digit growth rates, has traditionally exerted a bigger pull than the other Bric economies: Brazil, Russia and India. And if China has been the darling of the litter, Russia has been the runt - but could investors be missing a trick?

Most of the commentary on relative comparisons is couched in terms of macroeconomics, where China's (and India's) sheer size swamp the other members of the club. Moreover, China's 9-10% growth rates are held up as a miracle, but there is little discussion of either the quality of the growth nor the reason: China is growing so fast because it is right at the beginning of the convergence process, whereas Russia and Brazil are growing more slowly as both are about halfway through this historic transformation.

This begs the question: which is a better place to do business – in the nascent stages of growth or in a more mature economy? It depends on what you are selling; the sheer numbers of people in China and India will always beat the smaller populations of Russia and Brazil in their appeal to retailers of cheap goods, but the latter two are better markets for car manufacturers simply as the middle class is bigger and incomes are higher.

It boils down to a question of quality over quantity. Russia may have a 10th of the population of China, but those it does have are the richest of all the Bric nations by a wide margin - twice as well off as the average Chinese and five times better off than the average Indian.

Thanks to a decade of strong economic growth, Russia's per-capita income (adjusted for purchasing power) is about $15,791 compared with $10,846 in Brazil, $7,206 in China and $3,354 in India, according to UN statistics. "Russia is a middle-income economy and the other Brics are low income, so you have better education in Russia than others in the asset class, consumers are wealthier and crime is better," says Kingsmill Bond, chief strategist at Troika Dialog.

Moreover, Bond suggests that 68% of the Russian population can be counted as middle class (approximately 100m people), against 31% in Brazil (75m), 13% in China (160m) and under 3% in India (30m). This means that China may have 10 times more people than Russia, but th gap in terms of the number of consumers in each is not so big. Likewise, both Russia and Brazil have more than twice as many consumers as that other megalopolis India. "A lot of the concerns that people have about the Russian market are just long-held prejudices about the country are not relevant for investors," argues Bond.

In terms of education and human development (the UN’s measure of the standard of living) Russia scores the highest of the four counties, but this has not translated into health where Russia is one of the worst of the Brics.

Life expectancy in Russia is lower than in Brazil and China, dragged down by alcohol and drug abuse, particularly amongst men. Much has been made of the country's unfavourable demographics - Russia's population is shrinking while the other Brics are seeing theirs grow.

But fewer people means less competition for scarce resources; in China and India where there are huge numbers of people, a lack of clean water and a need to import fossil fuels could stoke a potent cauldron of social unrest. "Demographics is a red herring. There is more potential for unrest from a rapidly rising population competing for scare resources," Bond says.

Corruption is probably the hottest of the various button issues that pundits stab on a regular basis. But all the emerging markets suffer from chronic corruption. The problem with Russian corruption is that it's often destructive, whereas Chinese corruption tends not to be - Chinese officials are better at skimming their percentage off business deals without standing in the way of entrepreneurs.

Arthur Kroeber, head of Beijing-based consultancy Dragonomics, says corruption in China, while pervasive, has always been constructive rather than kleptocratic with officials wanting 10-15% of the top of deals and projects which go on to succeed. "Officials' interests are broadly aligned with those of the entrepreneurs. I don't see it as an obstacle to growth here the way it is in Russia or Africa," says Kroeber.

When comparing things like macroeconomic numbers or car ownership each of the Bric countries have their strong points and weak points as at the end of the day all four countries have only been lumped together as they are the biggest in their regions. However, Russia is clear the odd-one-out when it comes to investor sentiment.

Russian stock valuations are the lowest in the world, let alone compared with its Bric peers. The Russian price/earnings ratios – a popular way of comparing the value of shares – is only 6x earnings, compared with China where stocks trade at 16x, Brazil at 10x and India at 17x. All the Bric stock markets have re-rated to become attractive investments, except for Russia, which still trades at the same multiple it traded at in the 1990s. "Russia still has the stigma of being the weakest link in the Bric grouping, and investors favour other more market-orientated economies," says Nigel Rendell, emerging market strategist at RBC Capital Markets.

Allan Conway, head of emerging market equities at Schroders in London, says Russian stocks are significantly undervalued because investors overestimate the risks in the country and fail to see the strong economic fundamentals. Russia's economic bedrock is made of the hardest granite; growth is strong, inflation manageable, foreign currency reserves are huge and it is home to some of the largest energy resources in the world, he lists.

The Kremlin hasn't helped bolster Russia's image, which only adds to the burden that holds down stock prices and holds back foreign investment. The plunge in the country's stock market in 2008 after Russian tanks rolled over the border into Georgia and global oil prices slid, left investors jittery both about political risk and the Russian economy's reliance on the energy sector. A poor corporate governance record hasn't helped any either. "Even though a risk premium is appropriate for all these problems, a 50% discount to other emerging markets is too much," says Schroders Conway. "Russia has all it needs - it just needs to speed up the reform agenda."