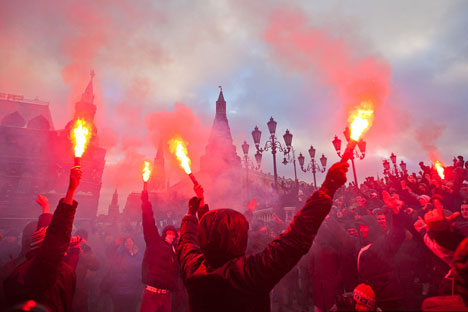 Thousands of football fans gathered in Moscow and St. Petersburg on Saturday to call for an investigation into the death of a Spartak Moscow supporter, Yegor Sviridov. The 28-year-old was shot dead in a brawl last Sunday.

What started out as a peaceful, sanctioned rally of demonstrators on Moscow's Kronshtadsky Boulevard turned violent as angry mobs broke away and moved toward the Kremlin.

The rally in St. Petersburg also descended into violence. The protesters started throwing ice and bottles at police, and a sizable number of reinforcements were immediately sent to the area.

Over 60 people were detained in St. Petersburg, bringing the total number of those detained in Saturday's riots to more than 120. All of the detained have been already released.

Around 30 people were taken to the hospital with injuries. Police sources said many of the demonstrators only came out to pay their respects, but things quickly got out of hand when some people decided to provoke clashes between the protesters and riot police.

“Some people have reacted very violently to the death of the Spartak fan," said Moscow's chief of police, Vladimir Kolokoltsev. "I do believe that some of their dissatisfaction is understandable, but it is unacceptable when we have aggression with firecrackers that burst into flames and ordinary people suffer. We will take all the necessary measures not to let anything like that happen again, so that the authorities are not accused of ineffectiveness in handling the killing of Yegor Sviridov. Police have already arrested those responsible for the murder and will arrest others. Everyone is equal before the law.”

Sports Minister Vitaly Mutko said he will take the investigation into Saturday’s riots under his special control.

It appears that the fighting was not caused by football fans, but was was reportedly instigated by various neo-nationalist groups, such as the Movement Against Illegal Immigration (DPNI). Witnesses said they were shouting racist slogans and attacking people of different ethnicities.

Boris Kagarlitsky, a political analyst at the Russian Institute of Globalization Studies and Social Movements, thinks the authorities did not take the neo-nationalist problem seriously enough.

“Those who are behind the riots want to destabilize the situation, and they definitely want to change the social and political agenda in the country,” he said.

There was an increased police presence in the Moscow metro on Saturday. A group was detained in the metro after attacking some innocent passengers and trying to provoke riot police. And around the capital on Saturday afternoon, mask-wearing hooligans were seen ripping out park benches, taking street signs and throwing bottles and flares at police.

Yegor Sviridov, 28, was killed in a fight involving some 10 people near 37 Kronshtadtsky Boulevard in Moscow's Golovinsky district, after being shot with a gun designed to fire rubber bullets, just after midnight on Sunday, Dec. 5.

Sviridov, who sustained four injuries, including to his head, died on the spot. It is believed that the gun had been modified to fire live rounds. A friend of his was also wounded and is in hospital in serious condition, Interfax reported.

A 26-year-old man named Aslan Cherkesov from the Republic of Kabardino-Balkaria in the North Caucasus was charged with homicide, and two more people have been charged with instigating a fight.

Immediately after Sunday’s incident, people took to the streets and the dispute turned into an all-out brawl involving Russian nationalists along with football fans and Caucasians. Over the past week things escalated, culminating in the events of Dec. 11.

Actions of Spartak fans have caused problems for their team as well. Spartak players had to leave the field twice in Slovakia on Dec. 8 after fans invaded the pitch and threw flares in their final Champions League group match. The incident could result in Spartak Moscow's disqualification from the Europa League. UEFA is now waiting for a match report from the referee and delegate for the match, Kevin Blom and Bontcho Todorov. An investigation into the events will then follow.

Fred Weir, a reporter for the Christian Science Monitor, thinks that Russia can learn a lot from other European countries that have had similar problems with soccer and nationalist passions erupting into violence. This is especially important, he pointed out, prior to the 2018 FIFA World Cup.

“Russians seem to be pretty resilient and not that receptive to racist appeals," he said. "I think that we should not immediately leap to the conclusion that there’s racist violence running amok in Moscow."

Igor Rabiner, a Russian soccer journalist and writer, said violence at the stadiums can only be tackled by a comprehensive approach to the problem.

“In my opinion, the problem is not about Spartak, but all of Russian soccer, which doesn’t have a program to fight violence at the stadiums and outside of them,” Rabiner said. “Our soccer doesn’t have a policy for the protection of spectators. So there’s a pretty small audience coming to Russian Premier League games because ordinary people, ordinary fans, are really scared of dealing with these aggressive fans – and, at the same time, with aggressive police.”

This story originally appeared at RT.com