Medvedev to visit India on December 21-22 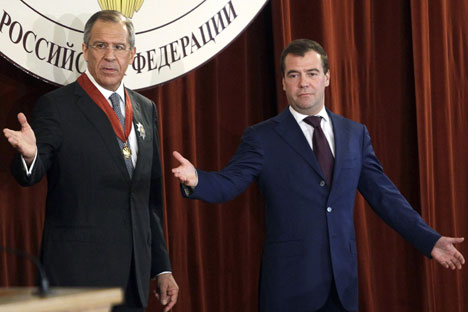 India and Russia are likely to sign half-a-dozen agreements, including a long-pending one on co-developing and producing a Fifth Generation Fighter Aircraft (FGFA), during Russian President Dmitry Medvedev's two-day visit beginning December 21, The Hindu reports.

Another important agreement will be in the civil nuclear sphere where both sides will seek to fill in more details to the umbrella agreement signed during Prime Minister Manmohan Singh's visit to Moscow in December last year. India is willing to shift the Russian nuclear site from West Bengal and a concrete offer in this respect will be made during the visit.

The two sides are also expected to ink pacts in space and trade. In particular, Russia will be seeking to address the hesitation by its banks to get involved in a big way. A mega diamond company Alrosa has already entered into deals with Indian companies and is looking to take the partnership forward.

Delegations from both sides are also slated to hold discussions on greater cooperation in the oil sector. India is interested in getting a stake in Trebs and Titov oil fields where the participation of its companies has been stymied by tender conditions.

The Oil and Natural Gas Commission is also keen on taking forward its plans to get involved in the Bashkortostan gas field. Reliance is interested in setting up a refinery in Russia, a move that could help it get a foothold in the Russian strategic oil and gas reserves that are being thrown open for commercial exploitation.

From the Indian side, there is great interest in developing a long-term partnership in the pharmaceuticals sector. According to The Hindu, New Delhi is prepared to help reduce Russian dependence on imported drugs through joint ventures. But the entry of its companies has so far been on hold due to Russian reservations on doing away with clinical trials.

Both sides have already agreed to jointly develop and produce military transport planes. Indian security concerns over its depleting fighter aircraft fleet will be reduced to some extent if both sides manage to ink the FGFA deal. Over time, at least 250 advanced fighters will be inducted into the Indian Air Force as a result of the agreement, The Hindu reports.

Mr. Medvedev and Dr. Singh will also discuss the regional situation including Afghanistan where both sides are keen to avoid a situation that foists a fundamentalist, theocratic regime in Kabul. India will seek to address Russian reservations on the TAPI (Turkmenistan-Afghanistan-Pakistan-India) pipeline in this context and explain that economic development of Afghanistan, especially in Pashtun areas, would get a boost.