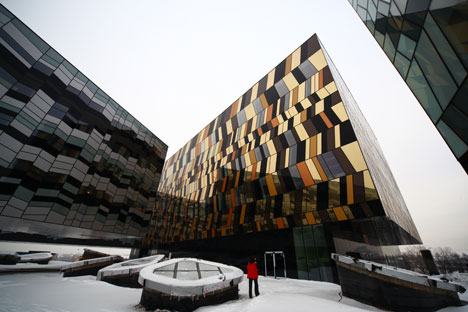 The first class at Skolkovo, including students from India and Brazil, focused on practical skills such as living in a factory town in China.

When Canadian Kane Cuenant was looking at MBA programs, he thought about studying at Harvard University or Tsinghua University in China. Surprising to some, he opted to study at Moscow’s newly opened Skolkovo Moscow School of Management.

“I looked at different schools in developed markets, but it didn’t seem real enough. I knew that I wanted to work in emerging markets and I wanted to truly understand how to do it,” he said.

Cuenant is among the first 40 graduates of Skolkovo who completed their MBAs in November. He said that what attracted him to the school was its emphasis on learning practical skills in the markets he really wanted to work in. Skolkovo’s first MBA graduates hail from as far afield as Germany, India, Brazil and Australia, as well as from the former Soviet Union. There is at least one American graduate, Julia Lewis, who attended Lewis & Clark University back home.

It turns out that a Skolkovo education costs just as much as a Harvard MBA: about $80,000.

The young Canadian decided against the Chinese school because of its U.S.-style theoretical program and opted to study at the first Russian management school more focused on emerging markets. Skolkovo’s English-language syllabus is designed to teach graduates from around the world the day-to-day realities of doing business.

Skolkovo’s dean is Wilfried Vanhonacker, who moved to Russia in 2008 after setting up the internationally acclaimed China Europe International Business School (CEIBS) in Shanghai in 1994 - the school has since catapulted into the Financial Times top-20 ranking. At Skolkovo, he shifted the emphasis from classroom learning to a program where graduates spend more than 70 percent of their time in the challenging environments of emerging market companies and government departments, coming to grips with reality on the ground. “We are trying to bring reality into the classroom,” Vanhonacker said.

Multinationals will see most of their growth in the next 20 years in dynamic emerging markets where the business climate is volatile and uncertain, and managers face talent shortages, infrastructure and institutional gaps - as well as corruption. The Skolkovo MBA is designed to prepare students to face these challenges, Vanhonacker explained. “Traditional business schools were not preparing the talent the market needed—entrepreneurial leaders for difficult environments,” he added.

Students at Skolkovo must vault hurdles such as living for two months in a dormitory in a Chinese factory town and dealing with the reality of a manufacturing business, and even helping Russian bureaucrats draft laws that could then be passed by the country’s parliament. The program features the building blocks of MBA courses in the West, such as financial accounting, macroeconomics and marketing, but also puts graduates in stressful situations in alien cultures to hone their ability to cope.

For Western students, the course means dealing with the bureaucracy and corruption that come with doing business in emerging markets. For many Russian students, it means understanding corporate life in China and India as well as their native land.

However, despite the stresses of experiential learning, the small classes enable the school to give the students one-on-one career coaching, as well as customized leadership development classes. Each student works with a mentor from the business world who helps direct the student's goals and provides them with insight into the business culture of different companies.

Teachers also handpick groups of students to work on projects that reflect the culture clashes graduates will face. “We don’t allow students to pick their own groups until they get to the final phase of the course and have to launch a start-up. You don’t pick your colleagues in a company,” said Vanhonacker, who taught management at Columbia University in New York.

The experience of working in Russia, China and the United States has been invaluable, said Cuenant, who hopes to continue working in Russia when he graduates: “The value of working with government officials in developing markets is something you just can’t teach in a classroom. Most of the students who sign up at Skolkovo are not after a simple desk job. They want something more.”