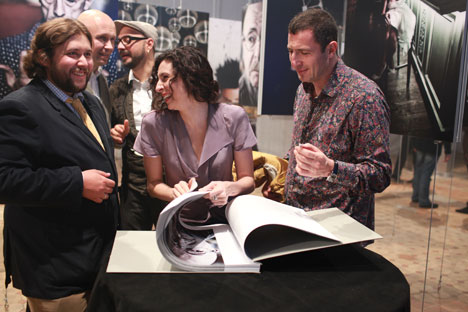 Customers could read fresh newspapers, drink tea and have a snack. Regular menu items included cold boiled meat, tripe soup, bread, eggs, bagels, salted or fresh cucumbers, and pies. Hot dishes were not served; they were available at a nearby canteen.

This photograph was shot two years after Ramenskoye received the status of a town. During these two years, photographer Boris Ignatovich worked in Ramenskoye as a staff photographer for the Bednota (Poverty) newspaper. He considered his photograph “Tea drinking at Ramenskoye” to be one of his best, hanging it on the wall at home. “When waking up in the morning, I enjoy seeing these bearded faces; they are so dear to my heart,” he wrote.

1. Saucer
Today, most people trying to sip tea from a saucer, as Russian tradition has it, fail to do so. The thing is that old tea saucers were deeper than today’s; they looked like low tea bowls. People drank tea from tea saucers because glasses with boiling tea were too hot.

2. Bednota (Poverty) newspaper
This was a popular daily newspaper published from 1918 to 1931. Most of its readership was peasants, who could also write for the newspaper: it had an extensive network of amateur rural correspondents. In addition to news and propaganda material, the newspaper also published articles about advanced agricultural and cattle breeding methods.

3. Telogreika (“body warmer”)
This is a quilted jacket made of coarse, wadded cotton fabric. In the 19th century, such jackets were part of military uniform (worn under the coat in cold weather). Retired soldiers who returned after service to their native villages use them as work clothes.

4. Baranki (bagels)
This is a traditional Russian pastry made of yeast dough. Baranki are boiled in water before baking, which protects them from going stale for a long time. Before the revolution, bagels from Valdai were considered the best, but in the 1920s, after private bakeries were nationalised, Valdai bagels were forgotten. By that time, bagels were baked at large bread factories.

5. Pair of tea kettles
This is a traditional way of serving tea in Russian inns: two kettles, one bigger with boiling water and one smaller with brew. These could be shared among any number of visitors, with more boiling water served on demand.