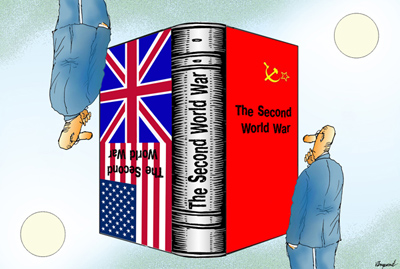 A screenshot from the soviet cartoon 'How cossacks were playing football'

In a dramatic decision, football’s premier governing body FIFA voted to award the 2018 World Cup to Russia. This was a huge victory for Russia which till the polling started was ranked behind England’s bid - the bookies’ favourite and a football powerhouse. Russia also overcame stiff challenges from the combined bids of Portugal-Spain on the one hand and Belgium and Netherlands on the other. The victory is remarkable for the fact that it will be the first time that the World Cup will be held in the eastern part of Europe.

It brings to fruition the massive effort initiated by the Russian government to put the country on the centre stage of world sports. Prime Minister Putin himself reportedly met with at least a third of the 24-member FIFA executive committee responsible for awarding the hosting rights of the World Cup. The football world cup ranks next only to the Summer Olympics in terms of prestige and attention.

Russia has already won the bid to host the 2014 Winter Olympics in Sochi and the showpiece annual Formula One event will also be held from the same year onwards. With the country hosting three major world sporting events in the next eight years, it is hoped that there would be a massive infusion of capital to boost the country’s infrastructure and upgrade the transport and tourism sectors. These are largely seen as a legacy development - created for an event and able to impact regional and city growth for long after.

The capacity of Moscow’s Sheremetyevo and Domodedovo airports will have to be doubled, high speed railway links between host cities will need to be set up, 19000 hotel rooms need to be either renovated or built, internet and telephone communications, and television and broadcasting infrastructure need to be improved.

In total, thirteen new world class stadiums are designed to come up in Russia in the next few years and the country is expected to spend eleven billion US dollars just on these games alone apart from much more needed for infrastructure development. Indeed, the stock markets responded on a very positive note with the MICEX index (particularly the steel company’s indices) reaching its highest level since July 2008.

There was widespread resentment and controversy over the way FIFA conducted the voting, with England claiming that justice was denied. A high profile English delegation comprising Prime Minister David Cameron, Prince William and football legend David Beckham had campaigned incessantly in Zurich to champion their country’s credentials to host the event. Allegations of corruption kept simmering right till the very end, with English officials claiming that the results had been fixed long before the actual voting started. Prime Minister Putin was conspicuous by his absence though he immediately jetted to Zurich on hearing the news and called it a ‘day of rejoicing’.

The World Cup is a golden opportunity for Russia to favourably build its reputation as a business and investment destination for the foreseeable future. The World Cup in South Africa helped create half a million jobs and pushed up the country’s GDP by one percentage point. More than 300,000 tourists visited South Africa, with fans spending US$ 520 million on hotels, food and clothing. This is a significant collateral benefit which Russia can avail of if it takes the appropriate measures in time. A report by Merrill Lynch has shown that Brazil and South Africa, World Cup host nations, saw their stock markets outperform a number of the world’s fastest growing economies (India, Russia, and China) after winning their respective bids.

Organizing the event is a corollary to President Medvedev’s ambitious policy of modernization of the Russian economy. In order to tackle Russia’s lack of global economic competitiveness, the President has chalked out a diversification plan to foster enhanced technological cooperation with the developed world: ‘modernization alliances’ especially with the United States and the European Union. The economy is in dire need of fresh investment and innovation. A concerted effort has been initiated to reduce over dependence of the economy on the oil and gas sector.

The World Cup provides a multitude of opportunities for Russia to accelerate its integration into the world economy. The financial and economic benefits for the country are clear. However, the benefits go beyond that by increasing joint initiatives with companies through Public Private Partnerships and attracting more foreign direct investment. Strict adherence to best international standards will also help to bring in the much needed efficiency in the system.

Russia will need to involve international contractors and suppliers on a scale never seen before in order to implement the reconstruction campaign in 13 cities from Kaliningrad on the border of the European Union to Yekaterinburg in the Urals. Transparency in awarding media rights, sponsorship packages and infrastructure bids, and impact of environmental damage and social dislocation will determine investor confidence in the country’s economy.

Russia needs to put in a monumental effort for the successful hosting of the games. Corruption is endemic in Russia and the country has almost slipped to the bottom of Transparency International’s Corruption Perceptions Index and is currently ranked at an abysmal 154th place out of a total 178 countries.6 However, recent developments suggest that policy planners have taken steps that will go a long way in curbing the pessimism that surrounds the business framework in today’s Russia.

President Medvedev has given top priority to an anti-corruption drive and introduced key legislation that should tackle the menace of rampant corruption. Russia is likely to sign the Organization for Economic Cooperation and Development’s Anti-Bribery Convention and join the OECD, which should be followed by its accession to the World Trade Organization. This commitment to global standards will in the longer-term enable the Russian government to introduce more effective anti-corruption laws and reform the law enforcement agencies to ensure effective implementation.

It is also important to see how Russia tackles the problem of bureaucratic red tape. A significant number of the country’s critical infrastructure projects are stuck in red tape and are running way behind schedule. A classic example is the plan to build a modern football stadium of Spartak club in Moscow. The decree to provide a plot of land to build the stadium was signed in 2006, but construction did not begin until the beginning of 2010. Russia will also need to curb racism which often rears its ugly head in domestic football matches.

Russia should be careful about the way it commits its resources in organizing these expensive games. It should closely look at the way Greece organized the Olympics in 2004 and try to avoid incurring the massive debt and other pitfalls which contributed to the virtual bankruptcy of the Greek economy.

It is also worth noting that all the BRIC countries - Brazil, Russia, India and China have recently hosted or are set to host major sporting events. The next World Cup in 2014 will be hosted by Brazil, New Delhi played host to the Commonwealth Games this year, and Beijing was the venue of the 2008 Olympic Games. This is an indication of the growing clout of BRIC states in global affairs.

India and Russia have a strong traditional strategic relationship. It is but natural for the two countries to share their best practises in organizing mega events. New Delhi had very recently hosted the Commonwealth Games and although the extravaganza was mired in controversy, yet in the end it indicated that India was capable of organizing such big events and prove that the much publicized Indian growth story was no fluke.

The need for massive investment opens up opportunities for Indian companies especially those which are directly related to infrastructure development. Steel giants like SAIL, TATA and L&T for building stadiums or parts of it, IT powerhouses like Infosys, Wipro and TCS for communications, India’s expertise in tourism, GMR’s airport modernizing capabilities, crowd and traffic management similar to the one implemented in Delhi during the CW Games, can all be tapped into.

It is hoped that in eight years time when soccer fans descend on to some of the brand new facilities of even provincial cities like Rostov and Samara, Russia would have by then succeeded in its modernization agenda. It would benefit not only Russia but the whole world and that is a goal, though ambitious, is worth aiming for. India should more actively look to partner Russia in its modernization programme.