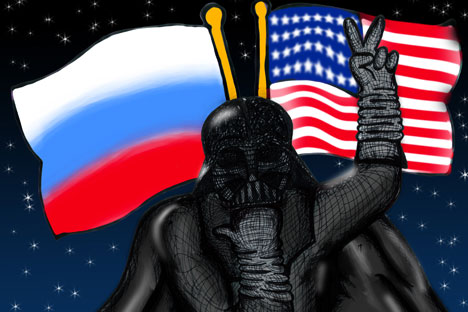 When I lived in Moscow during stretches of the 1960s and 1970s, torrents of incessant instruction and admonition made ear plugs indispensable for getting any work done. Russians’ urge to enlighten and educate everyone was never so powerful as under Soviet rule, when they exhorted and censured—let’s not speak of brainwashing—about everything, from high political matters to musical tastes and the moral significance of jeans. Very rarely were the people to whom the advice was bestowed listened to, and why should they have been when Russians had the answers, then from their (singular) reading of Marx.

The practice continues, if less routinely, in the Kremlin’s regular lectures to the former Soviet republics and satellites, Ukraine and Georgia perhaps most abundantly and in Prime Minister Vladimir Putin's occasional dressing down of NATO members. Nor is that adroit leader of one of the more unhappily corrupt countries who derides others for their corruption shy about bidding the United States to stop acting like Nazi Germany. At the same time, Washington is even more generous than Moscow in telling other people what to do and how to live. Americans are convinced that’s with far more reason because, wouldn’t you know, it’s we, with our unique virtue and special place in the world, who have the real answers and a duty to enlighten others with it. How embarrassing! And also passé!

Libraries have been written about the similarities of Russians and Americans—which is true in some ways, perhaps deriving partly from national childhoods in wide-open spaces where formality was unimportant, but decidedly not in others, such as attitudes to work and to pleasure. Although Russians can work as well as drink others under the table when motivated by a personal cause or dream, getting the job done for the sake of the job, so respected in America, has little appeal. And even after American freeing from some of our sexual fears, Puritanism persists in many ways and forms, while Russians are much less uptight about such things. On the other hand, the messianism that fuels the unembarrassed—no, the much self-appreciated—advice-giving by us both is an enduring similarity, and it appears to be growing.

Was that among the qualities that prompted Alexis de Tocqueville to predict, more than a century and a half ago when Russia and America were relatively secondary countries, that they would one day compete for world domination? Those two minor powers, wrote Tocqueville in “Democracy in America” in 1835, seemed marked “by the will of Heaven to sway the destinies of half the globe.” He might have added that although then relatively minor and unnoticed, Russia and America were more driven than merely moved by desire and a self-granted right to do the swaying, and little seems to have diminished it since then.

Putin of the greatly challenged Russian economy lectures world business leaders about economic management and Whitehall about British immigration policy. He warns Washington about its “aggressive” policies, explains the meaning of democracy to the rest of the world, likens “ill-considered” Western economic decisions to terrorism. But because I now live in the States, I hear more about our instruction than Russia’s. Much of it makes me cringe because what used to be called the leaders of the Free World seem unable to stop sermonizing.

Despite the change President Obama promised, does anything happen anywhere that doesn’t prompt Hillary Clinton to tell the involved what to think and do about it? Iran’s unlovely Mahmoud Ahmadinejad visits Lebanon, and our miss-no-opportunity-to-preach Secretary of State tells the Lebanese people to not let their sovereignty be undermined. In Cambodia, she urges its people to “confront [their] past” by continuing with the trials of the Khmer Rouge. (Apparently, she made no mention of us confronting the racial horrors of our past, which may be surpassed by Russia’s failure to come to grips with the pain and death caused by Soviet rule.) In Bejing, she tells her listeners about their need to honor women’s rights; in Sarajevo, she tells them they mustn’t allow their nationalism to sunder the union of Bosnia and Herzegovina. And everywhere she goes, she lectures about democracy, despite its subversion in America by advertising, lobbying and other uses of Big Money.

Least appropriate about the current advice-giving may be the shrinking justification for it because both countries are drifting downhill. By that, I mean that deteriorating infrastructures, educational standards and declining respect for the rule of law and for others are eroding the appeal of Russian and American civilizations.

Without breathing a hint that their decline is equal, I’m suggesting that vast expenditure of money and effort for empire-building, largely by swelling military power, have left de Tocqueville’s comers of the future themselves more than a little spent, at least temporarily. They’ve lost their confidence together with their sense of what to do with themselves; of where they want to go and what they want to achieve. As their idealism and morality sag, their corruption soars—again nothing like equally, but in parallel. Both are much less attractive to other nations than they were until relatively recently.

I’m also suggesting that the compulsion to give advice is part of our common problem in that it derives from a sense of superiority that is less and less grounded in reality. Our huge investments in boasting that we’re Number One seems to have drained us both of good sense and community spirit. While much of Europe is building societies that more or less satisfy their vast majorities, we continue slipping downhill, thumping our chests all the louder because our citizens know, consciously or not, that we’re in decline. Maybe it would help to shut up and listen a little.