Russia and the Caucasus: calls for justice in absence of the rule of law 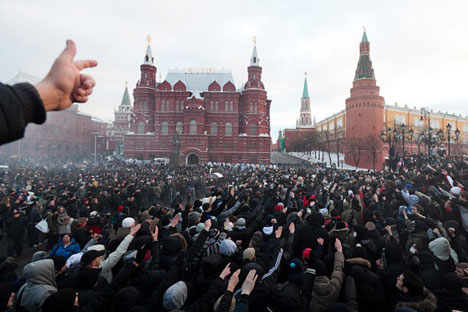 On Dec. 11, thousands of Spartak football fans gathered for an unauthorized rally on Manezh Square in Moscow. They were demanding that the people who killed one of their own, Yegor Sviridov, be brought to justice, and shouting nationalistic slogans. All the while, my daughter and I were at a concert, a cafe, the circus, all in downtown Moscow, but rather far away from Manezh Square. What’s more, we didn’t have a clue that anything out of the ordinary was going on.

Back home I turned on my computer and read the news for the first time. My first reaction was a feeling akin to approval. I liked that those young people stood up to the tyranny of the corrupt authorities, who have refused before to investigate killings committed by suspects from influential Caucasus clans. The rally was not authorized by the Moscow authorities, and I was pleased that the people did not let that stop them.

Then I learned that participants in the Manezh rally were beating up occasional passers-by from the Caucasus. Only then did I realize that my approval had been premature. I am not trying to explain the very complicated, centuries-old history between Russia and the Caucasus. I will only point out a number of aspects that hint at just how complex it has been.

Many people know about the deportations of Chechen families on Stalin’s orders in the early 1940s. Scores of them were sent to Kazakhstan. The official line was that the Chechens might want to help Hitler if he attacked the Caucasus. Few people recall that long before that, in the 1920s and early 1930s, the Soviet authorities were forcibly evicting Russian families from the Caucasus. The Bolsheviks thus sought to win over the locals and rely on traditional family and clan-based forms of authority in the region. As a result, Russians were evicted from the traditionally Cossack areas to the north of the Terek River. Come 1957, Nikita Khrushchev, who was fond of giving away land, gifted the area to the Chechen Republic.

Many people know about the destruction the Chechen war wreaked on the Caucasus’ economy. I personally know a well-educated young Chechen man from Grozny, who tearfully recalled how beautiful and flourishing the city was before the war. Even fewer people mention that after the Soviet Union’s demise, tens of thousands of Russian families fled death or slavery in Chechnya, leaving all their belongings behind. These families have not received compensation from the Russian government. Meanwhile, Chechnya’s budget for 2011 is 57 billion rubles (almost $2 billion). This is more than the budget of the Stavropol region, where twice the number of people live. Furthermore, whereas federal money accounts for less than one-fifth of the Stavropol region’s budget, Chechnya’s is more than 90 percent federally funded.

There are a lot of taboo subjects in Russia. One of them is quotas at certain colleges for admitting non-Russians, where non-Russians are given explicit preference. Another is that Russians who want to return to their homes in Chechnya cannot because they are afraid and there’s nobody to protect them. The tension and fear of people from the Caucasus and Central Asia are clearly a reality that has its reasons and its ugly implications. The youngsters that were beaten up at Manezh Square (judging by the photographs, there were young Slavs present) symbolize the dangers of yearning for justice that rely on hate rather than law.