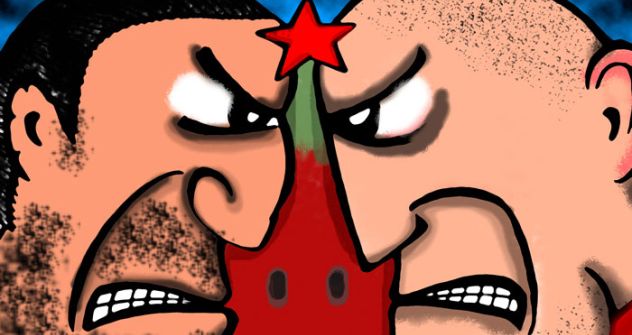 Carnage hit Manezh Square in central Moscow on the eve of Constitution Day, demonstrating that the serious problems in society, expressed in the relationship between the public and the authorities, have reached a boiling point.

The Moscow riots raised many issues, but I will focus on two aspects: political and managerial. Both are very important; the former sets the context, while the latter provides the framework.

Is it possible to call what is happening in Moscow mass unrest? Yes, you could say that, but at the same time, this unrest demonstrates the system’s viciousness, a situation in which life is guided not by the law, but by how it is interpreted. Under this arrangement, the law is not equal for all, and it is normal for closely held businesses and ethnic groups to “buy off” the police. If the other side has nothing to back it up, then the conflict usually ends there. But this time around, there was something backing it up: not cash or connections, but a large number of people ready to take to the streets. The police met their match. All in all, there was nothing new with how the murder of football fan Yegor Sviridov, killed in a brawl with several men from the Caucasus on Dec. 6, was handled: A district investigator let almost all the attackers involved get off scot-free. The ensuing mass protests and the real investigation, however, became the exception.

The authorities, represented by law enforcement officers, provoked a crowd of young football fans with their clear unwillingness (or incapacity) to investigate the high-profile murder case. Second, they failed to put up any effective resistance when the same type of crowd blocked a vital Moscow highway days before the Manezh Square rampage. The authorities had a chance to do something – even if they were not willing to run a true investigation – from Dec. 7 to 11, but they missed this opportunity as well. In other words, the authorities proved too slow and clumsy to fix the reason for the unrest, and not formidable enough to prevent further protests.

Another factor that fanned the flames was that idea that force is the only way to put pressure on the authorities: Political parties and deputies are useless. What you have left are protests, and the closer they are to the Kremlin, the better. This is an endemic flaw: to ensure compliance with the law, you have to either buy power or threaten those in power. As long as this problem remains, similar protests will happen.

With all due respect to Moscow Police Chief Vladimir Kolokoltsev, who went out to face the protesters, the actions of the Moscow police were reactionary and situational. The OMON special police force, which normally cracks down hard on human rights protesters and dissenters, was almost nowhere to be seen. Actually, OMON is tailored to serve the authorities, not the public, so the authorities did not bother much to stop the racially motivated violence in the Moscow metro against men from the Caucasus and Central Asia.

The official reaction, or rather the lack of such a reaction, speaks for itself: While the online community is abuzz, officials make no comments. It’s almost as if the authorities are paralyzed: President Dmitry Medvedev stamped his foot in front of the television cameras, Minister of Internal Affairs Rashid Nurgaliev made some incoherent remarks, mixing up the rightists with the leftists, Prime Minister Vladimir Putin and Moscow Mayor Sergei Sobyanin keep quiet, as did the speakers of both parliament chambers, party leaders, deputies and senators (although Chechen President Ramzan Kadyrov offered his ideas). The Public Chamber was the only exception, hosting a quick, but incomprehensive debate. For its part, the Investigative Committee tried to justify itself by laying all the blame on the police.

Tellingly, the mass protests did not even come up at any of the top-level meetings held the following day, including meetings of the Security Council, United Russia, and a youth meeting at the Skolkovo headquarters. Law enforcement officers focused on energy security, party bosses discussed fulfilling the goals laid out in the president’s address and the Skolkovo meeting mulled over youth creativity.

While battling the fictitious Orange (Revolution) threat for many years, the authorities overlooked the real threat from by the far-rightists, partly because they saw them as an antidote rather than poison. Where is Molodaya Gvardiya (Youth Guard) or Nashi, who are usually so instrumental in quieting the Khimki forest protectors and dissenters? Maybe some of them sided with the protesters?

As always, various conspiracy theories have been swirling about. Some point to the Kremlin-backed youth groups; the Kremlin has used football fans against their out-of-favor political rivals in the past. If so, the authorities’ poor propaganda campaign looked very strange, speaking to their apparent confusion. Others saw law enforcement hawks behind the unrest, in an alleged move to persuade the authorities to stop flirting with the West and liberals. Whoever provoked this violence – if any political force is behind – the scale of protests is nothing to sneeze at.

With a lack of consolidation within the authorities and the society, even a small but organized force can do a lot. Compared to other forces, nationalists are better organized and prepared to lead mass protests and use their results. What we saw was not so much the demonstration of their strength, but rather their ability to exploit the situation. There was a large mob at Manezh Square, it was aggressive and chanted nationalist slogans, but it would not exactly be accurate to describe it as wholly nationalistic. Many of the protesters were “fighters for fairness” enraged by the killing of their friend, they were Medvedev’s spontaneous supporters in his efforts to make Russia a lawful state. They demanded an unbiased investigation into the murder and did not get it. As a result, they blamed the corrupt authorities and migrants from the Caucasus and other regions.

Everything depends on what lessons the authorities learn from the events of early December and how much time they have to rectify the mistakes. The pendulum has now swung too far and too powerfully for an unbiased investigation of the Sviridov killing, which triggered the Moscow riots, to stop the carnage. If the authorities fail to react in a decisive and tough manner to the violent mob, and do not stop the spread of ultra-nationalist sentiment, new waves of ethnic violence, both anti-Caucasus and anti-Russian, will follow, and not just in Moscow.

Nikolai Petrov is a scholar-in-residence at the Carnegie Moscow Center. He has been a consultant to the Russian Presidential Administration, a professor, and a scholar at the Kennan Institute and the International Foundation for Electoral Systems as well as a widely published writer on Russian politics. Petrov holds a Ph.D. from Moscow State University.