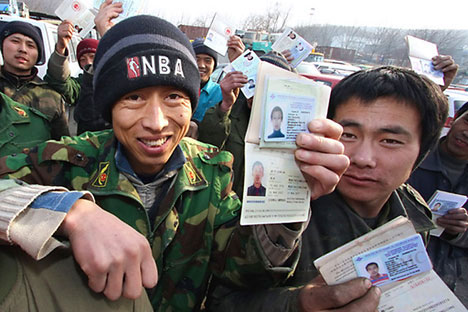 Since 2007, migrant workers from CIS countries have faced increasingly restrictive work permit quotas. Experts estimate there are at least six million migrants in Russia at any given time, yet the quota has decreased dramatically each year and for 2011 is set at just over 1.2 million. Why the government would restrict labor migrants is puzzling considering that the demographic crisis in Russia is most acute among the working age population, making migrants an essential part of the labor market.

Russia is second only to the United States in the number of migrants that arrive each year and so it is logical that the Kremlin would devote considerable energy to managing the situation. The task is complex because immigrants are at the center of tremendous tension between labor needs and xenophobic tendencies in society. Substantial portions of the Russian population do not welcome migrant laborers despite their utility, focusing on xenophobic sentiments along the lines of “Russia for Russians.”

In order to balance dueling demands, the government creates strict quotas that make it difficult for migrants to work legally, forcing them into the informal sector where they provide a cheap source of labor for business owners. Strict quotas that do not meet labor demand satisfy xenophobic elements in society because they create the perception that the government is clamping down on immigration. When quotas were increased from 1.8 million in 2008 to 4 million for 2009, the public backlash was immediate. During a December 2008 question-and-answer session broadcast on television and radio, a woman asked Putin why migrant quotas were so high given unemployment rates and the financial crisis. He sympathized with her query, indicating that he believed a quota reduction was justified. Within the month, Putin passed a decree cutting the quota in half despite the fact that the 2008 quota had been exhausted by May in a number of regions including Moscow.

This type of populist response keeps quotas completely separate from actual labor demands. As an instrument of immigration control, quotas themselves are not inherently problematic if they reflect true labor needs. The problem for Russia is that the process used to determine labor needs is not only complex, but is often disregarded by upper level officials. According to the legislation, employers are to submit projections of how many foreign workers they will need in the following year. In reality, few employers participate because the paperwork is difficult to understand, because it would require businesses working underground to formalize themselves, and because not participating doesn’t bar an employer from hiring migrants. The requests that are received are reviewed by the Ministry of Health and Social Development, the Federal Migration Service, the Ministry of Economic Development, the Federal Labor Service and Putin himself, who issues quotas by government decree.

Employers in Moscow requested 600,000 migrant workers for 2010, yet the city was only allotted 200,000 work permits, showing that in the processes of reviewing requests, bureaucrats and top officials were able to adapt the quotas to fit their own needs and the needs of other key figures. For example, regional governments are vocal lobbyists for low quotas. During his tenure as Moscow’s mayor, Yuri Luzhkov continually demanded lower quotas. Luzhkov consistently couched his arguments in language of protecting the labor market for native workers and cutting down on crime, rhetoric aimed at bolstering popular support from xenophobic segments of society.

In Moscow, migrants are employed in menial city jobs such as street cleaning and live in government-owned housing, hinting that Luzhkov’s intentions were not solely focused on benefiting the public at large and were certainly not aimed at keeping migrants out of the labor market. Rather, the informal labor of migrants produced by low quotas acts as an important benefit for a number of political and economic elites. Several oligarchs close to Luzhkov have long sat at the upper reaches of the construction and retail (outdoor market) industries, which are the largest employers of migrants.

One of the biggest players in the construction industry is Luzhkov’s wife, Yelena Baturina. Her company, Inteco, has been involved in building projects, including a number of government contracts, covering 1 million square meters of Moscow and its environs. Luzhkov also had close ties with Tel’man Ismailov, owner of the Cherkizovsky market, which employed scores of migrants despite a 2007 ban on foreign workers in the retail sector. In the past several years, Cherkizovsky was under constant threat of being shut down because of its connection with underground trading practices. Until 2009, when the market was closed by federal agencies, Luzhkov was able to delay the market’s closing thereby allowing Ismailov to continue amassing profits on the backs of semi-legal and illegal migrant workers.

In light of this, Luzhkov’s demand for lower quotas as a means to protect jobs and combat crime can be seen as a thinly veiled demand for greater numbers of informal workers for the city and regional oligarchs. The Luzhkov era is over, but the migration situation remains largely unchanged. Current mayor Sergei Sobyanin has continued the rhetoric of protecting the Moscow labor market for Russian citizens. The work permit quota for 2011 stands at just over 1.2 million for the whole of Russia and 160,000 for Moscow, both numbers a reduction of last year’s quotas.

Luzhkov was a key player in a complex patronage system linking political and economic elites from top Kremlin officials to municipal and regional players. He remained in power as long as he continued to provide benefits for the regime but has now been replaced by someone that can more reliably serve the Kremlin. The Kremlin relies on these regional leaders to manage migration in a way that helps balance xenophobia in society with labor market demands.

Diverting immigrants to the shadow sector through low quotas provides cheap labor to satisfy economic actors while maintaining a guise of strict formal order to satisfy xenophobic tendencies in society. In return, economic actors provide a number of benefits to the Kremlin including votes for the party of power, political loyalty and a stable system of informality that continues to absorb migrant labor into the shadow economy. But this strategy focuses on short term solutions to deeply complex problems, ignoring migrants as a potential solution to the demographic crisis and long term labor needs and fostering a climate that supports xenophobia. All the while migrants to suffer human rights violations at the hands of their employers, who often confiscate passports and fail to pay wages, and government bureaucrats and police, who take advantage of migrants’ illegal status to extract bribes at every opportunity.

Caress Schenk is a lecturer in political science at Northern Kentucky University.