Non/fiction book fair doesn't quite live up to its name 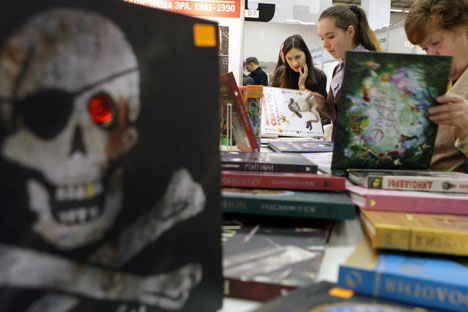 The Non/fiction book fair that took place in Moscow at the beginning of December was not all that non-fiction after all, despite what some major Russian newspapers reported. Fiction has been traditionally represented there, too; this year, the novels The Persian by Alexander Ilichevsky and A Guide to Letter Writing by Mikhail Shishkin were among the bestsellers. The fair is also the venue for awarding the Andrei Bely Prize, Russia’s oldest literary prize named after the renowned early 20th century writer and poet and writer. The prize consists of an apple, a bottle of vodka, and one ruble, which this year all went to the author Alexander Gavrilov for his novel The Berlin Flute. That said, Moscow’s Non/fiction is living up to its moniker of “the smart person’s book fair.”

Some 300 publishers and bookstores from 19 countries hawked their new wares at the fair, which also hosted more than 300 lectures, presentations, and roundtable discussions. Fifty new exhibitors have joined since last year, and Ireland was a first-time participant. The fair this year played host to about 33,000 visitors. Having visited Non/fiction on the opening day, I can confirm that despite it being a weekday, the halls were full of people, and more than 8,500 visited on the closing day. The smell of freshly baked bread and spices was wafting everywhere. Culinary books are also Non/fiction after all, and visitors could learn how to make hummus or bake a French baguette right at the stands.

But the culinary side of Non/fiction has already become a tradition. New additions to the program this year included two sections: The Vinyl Club for those who like and collect vinyl records, and the exhibition entitled Gourmet Books from the Late 19th – Early 20th Century for the Book Lover. Such books feature a limited number of copies, an original layout, special paper, artwork and covers, as well as autographs and owners’ stamps. Some of these books are hand-painted by artists.

Surprises and multiple formats have become the fair’s signature features. For example, Eksmo, a large Russian publishing house, had a stand that took turns as a lecture hall, a cinema, and even as a theater. This diversity was most strongly felt at the children’s corner. A space not far from the book lovers’ editions and a rare books auction contained a life-sized igloo made of cardboard boxes, hosted artists’ master classes, workshops, and public readings; children were writing about what they consider to be most valuable on pieces of paper and glued the pieces onto a “Values Tree” as if they were leaves. Artists and authors from France and Sweden were the most active in the children’s corner. It’s worth noting that children’s books were selling very well at Non/fiction; the quality of both Russian and translated books for children has improved considerably over the past few years.

France, the guest of honor at the 2010 fair, came up with a very substantial literary and research program. The French brought 2,000 books for kids and adults, presented their list of the best books, and held 46 events and 23 master classes. More than 500 people attended a lecture by the French philosopher and therapist Yulia Kristeva entitled What Makes a Person a Person. Open literature lessons were held daily at the fair. Lessons dedicated to Leo Tolstoy were among the most popular, while Pavel Basinsky’s book The Flight from Paradise, an original Tolstoy biography, became a bestseller at the fair.
The success stories at the fair demonstrated a renewed interest in history, current affairs and education. Documentaries, travelogues, and local-interest books were present in surprisingly strong numbers, and the quality of the publications was high. A new genre called Parody Regional Ethnography was introduced. For example, a book co-written by a team of authors under the title Higher, Further, Lower is a mock travel guide for Volga towns containing fictional, but real-sounding, stories about the area. While such a format has very little to do with actual documentary writing, it clearly indicates an increased writer interest in local Russian colour, something that was hard to find until recently.

When focusing strictly on the economics of it all, many visitors complained, some tongue in cheek (and many indeed with pride), that the fair sucks a lot of cash from the pockets of the modest Russian book lover. This year, Non/fiction’s most interesting projects included a stock bookstore called The Long Tail, which was selling books issued in various years but unavailable through regular book stores at a discount directly from publishers’ warehouses. Even though few publishers had joined the initiative, 4,000 books were sold.

Will next year’s Non/fiction fair, scheduled for Nov. 20-Dec. 4, 2011 at the Central House of Artists be more about fact or fiction, lectures or interactive games? We will wait and see.