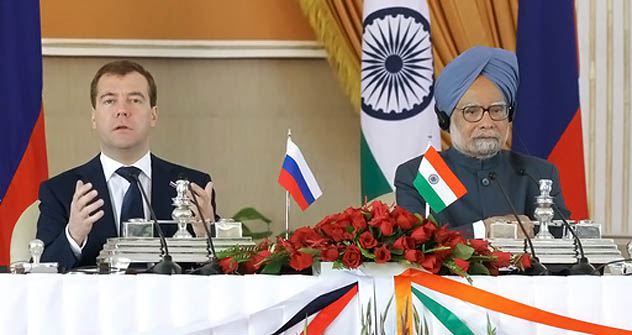 New Delhi, December 21, 30 pacts in several key areas such as civil nuclear cooperation and defence, including development of Fifth Generation Fighter Aircraft (FGFA) to augment country’s military capabilities, has been inked during the official visit of President Dmitry Medvedev to India.

During their nearly two-hour long annual summit meeting which encompassed a whole range of crucial bilateral, regional and global matters, Prime Minister Manmohan Singh and Russian President Dmitry Medvedev also took stock of the situation in Pakistan and Afghanistan which impacts on the security of both the countries, The Hindu said.

Besides deciding to enhance cooperation in crucial spheres of military, energy sector, science and technology, space research and pharmaceuticals, the two sides agreed to step up efforts to achieve the target of bilateral trade of USD 20 billion by 2015.

Apart from 11 pacts, which were signed after the talks, 19 agreements, including those between private companies of both the countries were inked on the margins of the summit.

According to The Hindu the key pacts include Preliminary Design Contract for FGFA envisaging joint design and development by Hindustan Aeronautics Limited and Russia’s Sukhoi Design Bureau and Rosoboronexport, Framework Agreement on Cooperation in hydrocarbon sector and MoU for joint research and development in reactor technology and related fields for peaceful uses of atomic energy.

Russian Minister of Energy Sergei Shmatko and Indian Union Minister of Petroleum and Natural Gas Murli Deora signed an agreement on the development of cooperation in the oil and gas sphere, Itar Tass reported.

Russian Minister of Education and Science Andrei Fursenko and Indian Union Minister of Science and Technology Kapil Sibal signed a comprehensive long-term programme of cooperation in the sphere of science, technology and innovations. Aside from it, the two ministers signed a joint working document on the creation of a technological centre by the Russian Ministry of Education and Science and the Indian Department of Science and Technology.

Sergei Kiriyenko, Director-General of Rosatom Corporation, and Shrikumar Banergi, head of the Indian Commission for the Atomic Energy, signed a memorandum of understanding on the expansion of scientific and technological cooperation in the peaceful use of the atomic energy. Konstantin Romodanovsky, Director of the Federal Migration Service, and Union Home Secretary Gopal Krishna Pillai signed a memorandum of understanding on control over illegal migration.

The parties adopted a joint statement on the results of the visit, entitled “Joint Statement: Celebrating a Decade of the India- Russian Federation Strategic Partnership and Looking Ahead”.

Alexander Leonov, Director-General of Machinostroyenie Production Association, and Sivathanu Pillai, Managing Director of BrahMos Aerospace, signed a protocol on the fulfilment of the contracts signed for the deliveries of BrahMos missiles for the Indian Armed Forces.

Vladimir Dmitriev, President of Vneshekonombank Corporation, and Rajiv Pal Singh, Chief General Manager of the State Bank of India, signed an agreement on cooperation in foreign economic activities. Apart from it, Dmitriev signed a memorandum of understanding and cooperation with the Export-Import Bank of India. SIBUR Holding and the Reliance Group of Companies signed an agreement on the main conditions for the creation of a joint enterprise for the production of butyl rubber in the city of Jamnagar. Russian R-Pharma and Indian Doctor Redddy’s signed a memorandum on the creation of a joint enterprise. Viktor Vekselberg, President of the Skolkovo Development Foundation, signed a memorandum of understanding with TATA Group. Systema Companies signed a framework agreement with the Indian OHGC Oil and Gas Corporation on cooperation in the production of hydrocarbons. Russian and Indian privately owned companies signed some ten agreements.

The two countries agreed to promote specific projects to encourage direct business-to-business dialogue between Indian and Russian oil and gas companies, to ensure that the contacts result in concrete and mutually beneficial commercial agreements.

They expressed satisfaction at the extension of the Integrated Long Term Program (ILTP) for scientific and technical cooperation for another decade and its focus on identifying innovation—led technology programs. The two sides agreed to make efforts to continuously upgrade joint military exercises in all forms including in the field of counter-terrorism.

The Russian side also expressed its readiness to assist and promote a discussion and positive decision in the NSG on India’s membership in the 46-nation grouping. Russia also took into positive consideration India’s interest in full membership in MTCR and the Wassenaar Arrangement. Apart from this, the Russian Federation agreed to make efforts along with other Shanghai Cooperation Organisation (SCO) members to accelerate the process of India’s entry into the organisation, The Hindu reported.

Medvedev said Russia supports India as a “deserving and strong candidate” for a permanent seat in the UN Security Council as and when a decision for its expansion is taken. Noting that the reform of the UNSC should be carried out in a manner that reflects contemporary realities and makes this body more effective in dealing with both present-day and emerging challenges, the two sides decided to work closely in the Security Council during the 2011-12 period when India occupies a non-permanent seat in it for a two-year term.

According to The Hindu, during the talks, Mr. Medvedev also extended an invitation to Dr. Singh to visit Russia next year which was accepted by the Prime Minister.