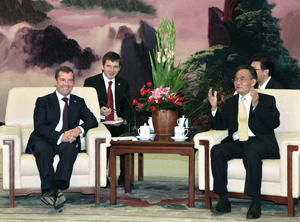 The old question of who is the senior partner in the Russian leadership, President Medvedev or Prime Minister Putin, has resurfaced with the exposure by WikiLeaks of methods and standards of American diplomacy. U.S. diplomats, raised on Hollywood clichés, picture Putin and Medvedev as emcee and wingman, respectively, thus defining their place, as it were, in the Russian hierarchy. With characteristic straightforwardness, Putin called this attitude toward world leaders insolent and brazen. For his part, Medvedev — after a pause or, in diplomatic language, a pattern of silence — reacted to this with some humor, but also harshly, calling the practice of labeling people cynical.

It needs to be said that for most Russian voters the question of who is first in the Russian leadership is not the main thing. At least not now. But already voters are noticing certain changes not so much in the division of power between the two leaders as in their status. American diplomats are evidently prevented from seeing such transformations by their own labels. Putin, of course, is presented as the more seasoned and experienced of the two politicians, which is only natural given his eight years in the Russian presidency. But Medvedev too has begun to show a grasp that he did not exhibit earlier.

Those who like to speculate as to who is the senior member of this team cannot have failed to notice a series of major political decisions made by the president in recent months, decisions that point to his maturity and independence. This fall Medvedev took flight once and for all, and now he may choose himself the currents of air that will lift him into the highest trajectories. One of the most important steps for Russian voters was the sensational dismissal of Moscow Mayor Luzhkov. Indeed, the significance of this decision extends far beyond Moscow, and even Russia. The very way in which the longtime master of the Russian capital was overthrown demonstrated to voters the president’s toughness of character and determination.

In his annual address to the Federation Council on the last day of November, Medvedev again touched on this topic, stressing that the new mayor, Sergei Sobyanin, would be charged with the important task of turning Moscow into an international financial center. For Russians the more important thing is that in Medvedev’s appointment of Sobyanin they saw the strongest blow yet to corruption in recent years. Luzhkov used Moscow as a financial center for his own entourage and, mainly, for his wife Elena Baturina, who became, by some strange concatenation of circumstances, the richest businesswoman in the world during Luzhkov’s rule.

In order to turn Moscow into an important international center, Sobyanin will have to not only redirect the flows of cash, but also reshape the city’s entire infrastructure. After acquainting himself with the state of affairs in the capital, Sobyanin said that Moscow was a collection of all the city-planning mistakes of all the cities in the world. That Medvedev mentioned the new mayor in his annual address to the Federation Council proves once again that Sobyanin has been given carte blanche by the president to correct all these mistakes. Judging by his first decisions, Sobyanin adheres to Medvedev’s style and has already taken several decisive steps to correct the situation. People in every region of the country are watching him closely. If other cities follow Moscow’s example and begin waging an uncompromising war on corruption, other cities where corruption often leads to a melding of the powers that be with the criminal world, then the removal of Luzhkov will have been one of Medvedev’s strongest moves. For Russians this is far more important that any ratings or labels.

Another symbolic event this fall was Medvedev’s trip to the Kuril Islands. This trip had especial significance given that it was followed almost immediately by a visit to Japan which has repeatedly claimed rights to these territories. Medvedev was not stopped either by Japan’s warning or by the coincidental inspection of Shikotan Island with work by the APEC forum in Yokogawa. One may argue as to whether this coincidence was accidental or not, but by going there Medvedev put an end to the long-drawn-out dispute. After informal meetings of Russian and Japanese leaders, after numerous promises to find a mutually acceptable solution, Japan was sent a clear signal: Russia is open to a dialogue, but not to concessions. The Kuril Islands are Russian territory; the results of World War II will not be reconsidered. It is on this basis that new relations between the two countries should be built.

Reopening the dialogue with NATO is also to President Medvedev’s credit. To the overwhelming majority of Russians NATO is primarily an aggressive militaristic machine striving to control not only Europe, but the entire globe. Therefore Medvedev’s appearance at NATO’s November session in Lisbon was seen in different ways by Russian society. With his speech at the session Medvedev managed, it seems, to reconcile those who recognize the need to cooperate with those who worry that NATO has grown so large that it will need to justify its existence by constantly participating in conflicts. If NATO listens to Medvedev’s appeal to reject that approach to solving problems and to assign top priority not to bloc interests but to international security, then Russians will have no doubt as to the usefulness of this dialogue.

This topic was also discussed at the 11th session of the Organization for Security and Cooperation in Europe on 1-2 December in the Kazakh capital of Astana. This organization too, according to Medvedev, needs to reconsider its positions, positions because of which the OSCE has lost its weight and authority in recent years. All conflicts should be resolved by exclusively peaceful means on the basis of rules of the game that are the same for all: this, in the opinion of President Medvedev, is what should guide the OSCE. Observers have noted that at all these international events Medvedev has spoken with confidence and openness, while making specific suggestions. He has not had the least appearance of a novice, much less of someone who takes a back seat at home.

In this respect Medvedev’s latest address to the Federation Council offers interesting food for thought. Contrary to expectations, Medvedev did not make any sensational announcements and did not resort to the tactic of lavish promises. To some critics his address may have seemed not overly expressive. Indeed, it contained no dramatic appeals, no speechwriterly effects. On the other hand, Medvedev’s tone was businesslike throughout, and for every problem he cited he produced a list of steps to be taken to solve it. In this context we see that the idea of Russia’s modernization, about which Medvedev has said so much, has a father. And he will have to raise education, medicine, transportation and the neglected communal services to a new level. This is hardly an advantageous program or one that can be carried out in a year or two; it is a long-term project that only a very confident leader could take upon himself.