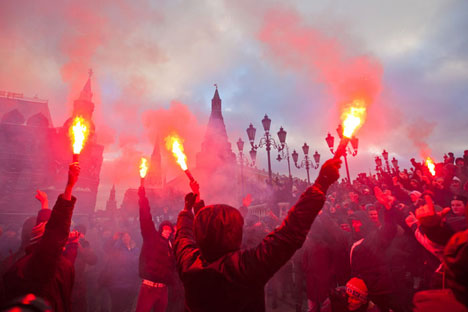 Violence came to Moscow this month when demonstrators took to the streets protesting the alleged mishandling of investigations into the death of a football fan.

On December 11, an estimated 5,000 football supporters took to the capital's central streets and squares, protesting at what they saw as the authorities’ inadequate investigations into the murder of one of their fellow fans.

In the aftermath, anti-riot units patrolled other likely flashpoints, detaining around 2,000 people, many armed with knives, clubs and other weapons. Violence also erupted in other cities, including St Petersburg and Rostov-on-Don.

The authorities have promised to take a hard line against the instigators of bloodshed and destruction of property. “Violence, fights, vandalism – these are all crimes, not administrative offences but crimes,” said President Dmitry Medvedev. “The participants must be put behind bars.”

The president said action would also be taken against lax or corrupt investigators who detained but then released prime suspects in the December 5 murder of Yegor Sviridov, a member of the Spartak Moscow fan club. The 28-year-old died of rubber bullet injuries in a street brawl with a group from Russia’s North Caucasus region. Spartak fans claimed police arrested then freed the perpetrators because of their powerful connections.

“We need to deal with the investigators who released the guilty parties,” Mr Medvedev said. “Why did they do this? Were they afraid? Was it for money?”

The events were particularly untimely, coming so soon after Fifa named Russia as host of the 2018 World Cup. But while it was fans who staged the initial protest, ultra-nationalist elements subsequently hijacked events to foment racial tensions. The demonstrations also drew students and other members of the public who are outraged by the behaviour of law-enforcement agencies.

A recent survey by Russia’s leading pollster, the Levada Centre, showed that 60pc of Russians are dissatisfied with the police, believing they act mainly in their own interests.

Days after the riot, around 1,000 of Mr Sviridov’s supporters rallied close to an Investigative Committee office in Moscow, blocking a main road during rush hour.

Among the crowd was Alexander Zaldostanov, a leader of Moscow’s famous Night Wolves motorcycle club, who rode with Prime Minister Vladimir Putin this summer.

Mr Zaldostanov claimed he and others joined the renewed protest out of solidarity. “We just came to support the guys because we don’t feel indifferent,” he said.